The coronavirus outbreak exposed a largely unknown deficit in the Oslo Accords: the existence of large areas outside the authority of Palestinian and Israeli powers. 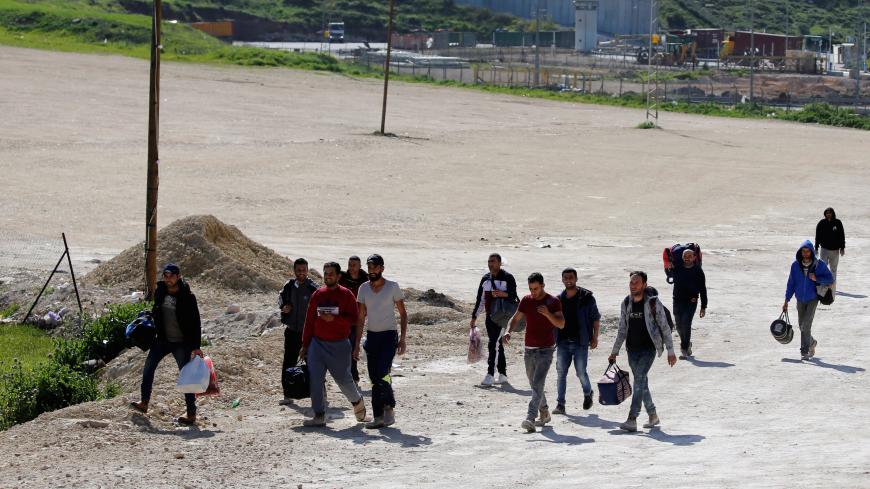 Palestinian workers returning from Israel arrive at a testing site for the coronavirus disease (COVID-19), outside the Israeli-controlled Tarqumiya checkpoint near Hebron in the Israeli-occupied West Bank March 26, 2020. - REUTERS/Mussa Qawasma

On March 31, at 6:30 a.m., a car approached a temporary Palestinian checkpoint. The checkpoint was manned by members of the Palestinian Ministry of Transportation and located on the Palestinian side of the Israeli-built wall around the West Bank. Its aim was to regulate the movement of people into the Qalandia and Kufr Aqab areas during the COVID-19 outbreak.

According to Qalandia Media Center, authorities asked the Palestinian driver if he had a permit to be driving during a state of emergency in areas under Palestinian control. Exceptions have been made for medical staff and other essential service providers, but the driver had no such permit. He was not allowed into the town of Kufr Aqab. The angry driver gathered relatives and friends and returned to the checkpoint. For three hours, the group fired shots into the air in protest.

Palestinian government spokesman ​Ibrahim Milhem told Al-Monitor that under the state of emergency (which was renewed April 1) the Palestinians are under lockdown, and travel is permitted only with permits. “While the [World Health Organization] has called for cooperation on all fronts in the fight against the COVID-19 pandemic, the Israelis pick and choose where and how to cooperate,” he said.

As a result of the incident at the temporary checkpoint, Brig. Gen. Nedal Abu Dukhan, head of the Palestinian National Security Forces, ordered a unit to move into the area. “The security forces arrested the outlaws who had caused the violent confrontation,” read a statement from Abu Dukhan.

Fadi Hidmi, the Palestinian minister for Jerusalem affairs, told Al-Monitor, “We have a number of confirmed coronavirus cases in that area and we have an obligation not to allow the spread of the virus.”

Hidmi talked to Al-Monitor shortly after being released after a pre-dawn arrest by the Israelis. He said he was punched by Israeli security forces when he refused to wear a mask that had blood on it. CCTV video footage shows that Hidmi’s house, in Jerusalem's Mount of Olives area, was searched by security forces early Friday morning as Hidmi was physically manhandled by Israeli officers for the fourth time since becoming a minister. He told Al-Monitor that he was released on bail and ordered not to move around the city and not to be involved in any activities in Jerusalem dealing with the coronavirus. He had earlier launched the madad.ps website, which allowed Jerusalemites to seek help and to connect them with volunteers and supporters.

Unarmed Palestinian security has been working in Qalandia and Kufr Aqab, known as Area B and just outside the Israeli wall built deep into Palestinian areas of Jerusalem. This is one of the first times that Palestinian armed security with their official suits have been deployed unofficially in the Kufr Aqab and Qalandia areas.

Mohammad Hadieh, a lawyer and the executive director of ACT, a conflict resolution Palestinian NGO, told Al-Monitor that the vacuum left by Israel has led to lawlessness. “In Kufr Aqab, we have armed thugs that deal with drugs. We have unregulated buildings coming up everywhere, as well as people wanted for crimes in the Palestinian areas," he said.

Further complicating the matter, Hadieh said, is that the people who live in these areas have Israeli residence IDs and think they are above the law.

“Israeli security only shows up to arrest Palestinians while the Palestinian police have to wait hours before being allowed by the Israelis to move into the area to quell local conflicts, which sometimes include the use by some of firearms,” he said.

Hadieh would like the Palestinian police to move into Kufr Aqab and other areas but said there is no political appetite for such an endeavor. “The Palestinian political establishment doesn’t have the courage to take such steps because of fear of Israeli retaliation,” he said.

Hadieh called for the creation of a community police force to deal with the problems stemming from this securiy vacuum in areas like al-Ram, where the Palestinian police presence is negligible. “In some areas, we have too many high-level officers and not enough policemen on the streets,” he said.

The incident at the temporary checkpoint is a glimpse into a future where outlaws exist without a police force to deter them. Palestinians can’t allow this lawlessness to continue while the coronavirus is a threat to people's lives. The calls by the World Health Organization to cooperate in fighting coronavirus need to be consistent on all levels, including ways to deal with the lawlessness in a vital area home to thousands of Palestinians.