Islamic banks operating in Palestine have experienced remarkable growth in the past decade compared to conventional banks. 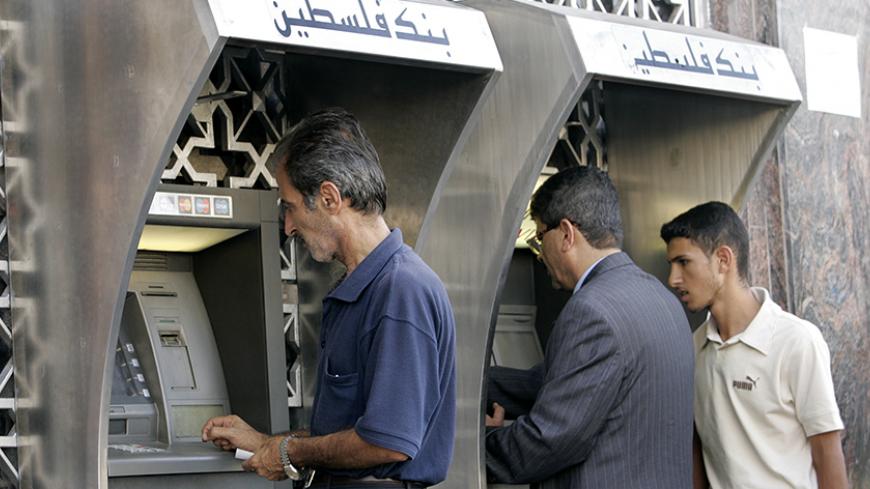 Palestinians use automated teller machines of the Bank of Palestine in Gaza, Sept. 25, 2007. - REUTERS/Ibraheem Abu Mustafa

GAZA CITY, Gaza Strip — Sumaya is standing in a line at a commercial bank in the Gaza Strip to ask about the possibility of applying for an Islamic loan with zero interest. She wants to buy a small apartment as an investment. Asked why she was looking into an Islamic loan, she said, “I have no intention of yielding to the exploitative gains of an interest-based loan. The money is more blessed when the Sharia is applied.”

Islamic banks in Palestine have been doing remarkably well over the past few years as a result of increased demand for their services. They have not only increased their market share of customers, but are also making more investments compared with their conventional, commercial competitors.

Islamic banks offer standard banking services like any other bank, in addition to certain finance tools specific to Islamic finance, that is, that comply with Islamic law. Among the latter are “mudaraba” (profit- and loss-sharing financing), “murabaha” (cost plus financing), “bai salam” (advanced payment contract) and “istisna” (manufacturing finance).

The key tenet of Islamic finance is that “riba,” interest paid on loans, is forbidden. Thus Islamic banking instruments are designed in such a way to avoid interest. For example, with mudaraba, a “silent partner,” the bank, provides financing to another “working partner,” the borrower, but instead of agreeing on an interest-accruing loan, they split any profit or loss according to an agreed-upon percentage. Through mudaraba, Islamic banks offer interest-free loans to enter into a partnership with borrowers when high risk is involved.

According to figures provided to Al-Monitor by the Palestinian Monetary Authority (PMA), Islamic banks' assets grew at an average annual rate of 13.6% between 2007 and 2016 compared with 9% for conventional banks. Their assets at the end of 2016 totaled $1.688 billion, accounting for 12% of total assets of banks operating in Palestine, compared with 9% at the end of 2007.

To this end, Shawwa said, “The PMA sought to develop the Islamic banks’ work environment and issued instructions and controls related thereto, including Instruction No. 5-2013, ‘Organizing Islamic Banks’ Work.’”

Shawwa further explained, “The PMA managed to address the [overall] banking environment and strengthen the applicable principles of governance by imposing stricter disclosure requirements, ensuring greater transparency and developing internal control and auditing systems, and this has helped the growth of banks, especially Islamic ones. Added to this is that the banking safety net was enhanced through the establishment of the PMA’s Palestinian Deposit Insurance Corporation (PDIC).”

The PDIC insures customer deposits against loss. Islamic banks offer savings accounts for customers interested in an alternative to standard commercial banks. While these accounts do not earn the bearer interest, the bank can use portions of the funds for its own Sharia-compliant investments while retaining reserve amounts.

Shawwa said that progress in the sector has been accompanied by awareness campaigns that the PMA organizes on a regular basis. These initiatives have contributed to enhancing public confidence in the banking sector and increasing people’s willingness to approach banks.

According to PMA figures, lending provided by Islamic banks grew at an average annual rate of 21.8% between 2007 and 2016 compared with 18.6% for conventional banks. At the end of 2016, Islamic funding amounted to about $970 million, accounting for 14% of the total credit provided by banks operating in Palestine. At the end of 2007, the share had stood at 12%.

Asked about possible risks facing Islamic banks, Shawwa explained that they are the same as other banks must contend with, such as those involving credit, the market, operations and the peculiarities of the Palestinian situation and its effects on the local work environment. Chief among these is the absence of a national currency, in addition to obstacles imposed by Israel that affect the banking sector.

There are 15 PMA-licensed banks in the Palestinian territories, including three Islamic banks. In addition, two banks operate in Gaza without connections to international banks and without a license from the PMA for political reasons. In other words, they are affiliated with Hamas. The number of branches and offices of Islamic banks operating in Palestine at the end of 2016 stood at 48, compared with 21 at the end of 2007.

Alaa al-Din al-Rafati, a professor of Islamic economics at the Islamic University in Gaza, told Al-Monitor, “Islamic banks operating in the Palestinian territories continue to suffer from problems in fully applying the Islamic system to banking transactions.”

Rafati explained that most Islamic banks still fail to provide a diversification of banking services, choosing instead to focus on murabaha lending. This is cost-plus financing, whereby the bank buys a commodity desired by the customer, pays the price in cash, and then sells the commodity on to the customer at a deferred price with a predetermined profit above the cost of the item. The customer pays the bank in a lump sum or in installments.

Rafati believes that Islamic banks should in general operate in full Islamic banking fashion, which would require the Palestinian Authority to promulgate new laws for the sector. One paragraph in the Banking Act (2010) permits Islamic banks to operate, but there are no incentives legislated in this regard.

He also pointed out that the PMA serves as the central bank, which maintains requisite cash reserves. The Islamic banks are obliged to deposit their reserves with the PMA, which calculates a certain interest rate on those reserves to be paid to the monetary authority when the Islamic banks draw on those funds to make loans. As noted, however, Islamic banks typically forgo all interest.

Atef Alawneh, chairman of the al-Bireh-based Arab Islamic Bank, told the Maan news agency March 14, “Islamic banking has started to develop because it managed to prove its resilience in the face of all the global economic shocks due to its low risk, which helped to focus major global banks’ attention on this type of banking.”