Will Palestinian central bank, currency ever see light of day?

A Palestinian central bank has been a long time in the making, and if Israel reacts as expected, it could be even longer before the institution becomes a reality. 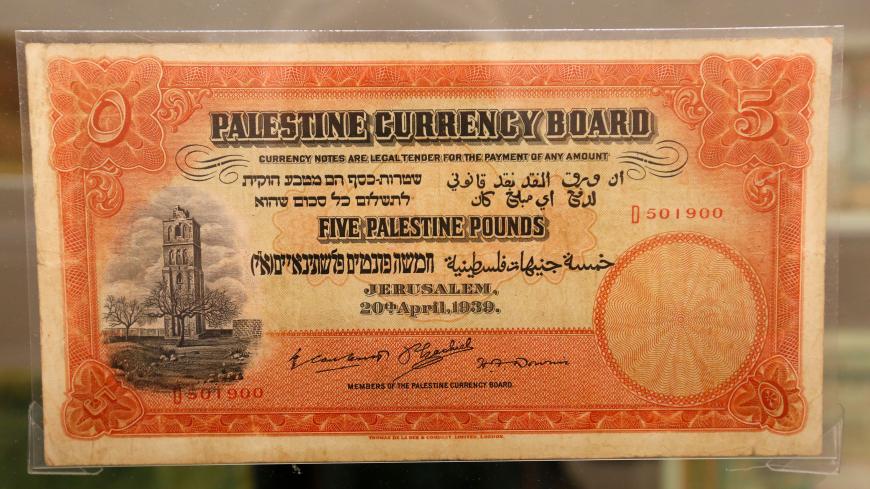 A sample of a Palestinian historic banknote is displayed at the currency museum of Lebanon's Central Bank in Beirut, Lebanon, Nov. 6, 2014. - REUTERS/Jamal Saidi

There seems to be new activity toward establishing a long-awaited Palestinian central bank.

Palestine Monetary Authority (PMA) Gov. Azzam Shawwa revealed Jan. 14 that arrangements are being made for the bank, though he provided no details. He had noted in a Dec. 23, 2019, interview with the Saudi Mubasher Info news website that Palestinians have been dreaming of turning the PMA into a central bank for several years now. These expectations follow a decade of efforts that are to culminate with President Mahmoud Abbas’ ratification of the 2015 Banking Law, which deals with the Palestinian central bank specifically.

This declaration shed light on the bank's possible intended purpose and existing banks' attitudes toward the effort. There are concerns that the Palestinian Authority (PA) might seek to control the banking sector, and some in the industry also believe there are political conditions and obstacles that might hinder a central bank's establishment.

A PMA official told Al-Monitor on condition of anonymity that efforts to form a central bank started in 2006 with the adoption of the PMA strategy. "The PMA began drafting the banking law in 2015 following in-depth discussions with local and international authorities including faculties of economics in Palestinian universities, local Palestinian banks, Arab banks and the International Monetary Fund (IMF)," he said.

The official added, "We expected the president to ratify the law in late 2017. However, such a decision needs political will and is linked to complex political, sovereign and economic considerations. The PMA headquarters in Ramallah is still awaiting a final decision regarding whether the sign should read 'Palestinian Monetary Authority' or 'Palestinian Central Bank.'”

Many Palestinians believe that establishing a Palestinian central bank requires prior coordination with Israel through the international community. They believe Israel otherwise might see the move as a prelude to declaring a Palestinian state, which could result in more economic sanctions on Palestinians. Israel also might think a central bank would allow the PA to make good on threats to revoke all agreements signed with Israel, especially the 1994 Paris Economic Agreement.

Saif Al-Din Awda, an economics professor at the Islamic University of Gaza, told Al-Monitor, “The establishment of a central bank requires the PA to keep consulting with the World Bank, the IMF and the International Quartet Committee [for Peace in the Middle East]. The PMA is logistically and technically ready to turn into a central bank, but such an announcement needs careful coordination to avoid a clash with Israel, as this could create problems for the banking system and negatively affect Palestinians.”

By the end of October 2019, total Palestinian cash reserves amounted to almost $1.16 billion, as the total assets of Palestinian banks exceeded $16.7 billion and the total deposit portfolio exceeded $13 billion. Meanwhile, total credit facilities extended to the PA amounted to $8.86 billion.

There are 14 Palestinian banks, with 368 branches. The banks in recent months have extended several loans to the PA to help it weather its persistent financial crisis.

Palestinian Minister of Finance Shukri Bishara announced Sept. 4, 2019, that, up until February 2019, the PA had borrowed $450 million from local banks to cover the salaries of government employees, and this negatively affected the liquidity available with banks. The maximum amount that the PA could borrow from Palestinian banks in 2019 was $500 million.

Farid Ghannam, undersecretary of the Palestinian Ministry of Finance in Ramallah, noted April 24, 2019, at a symposium organized by Transparency Palestine - AMAN that the PA employs 133,200, including 33,800 in the Gaza Strip and 99,400 in the West Bank. He said their salaries amount to $1.77 billion in total per year.

Mohammed Abu Jayab, editor of economic newspaper Al-Eqtesadia in Gaza, told Al-Monitor, “The [effort to establish] a central bank lacks several tools that are quite necessary, [especially] a local currency. Also, the Palestinian economy is suffering from structural distortion amid an inability to control Palestinian land, air, and seaports. Add to this that local banks are concerned there might be a hidden agenda behind establishing a central bank, which is to control and acquire local banks.”

Shawa's announcement sparked divergent opinions among Palestinian economic experts, who said Jan. 19 in separate interviews with Al-Najah news that Israel isn't likely to approve of this step, which requires Palestinian political independence to begin with. And in the event the central bank is announced without a Palestinian national currency, then the bank will be stillborn and will only amount to a political statement.

Samir Abdullah, former Palestinian minister of labor and planning in Ramallah and now a senior researcher at the Palestine Economic Policy Research Institute - MAS, told Al-Monitor, “The tendency to announce the establishment of a central bank dates back to several years, and I don't know if its resurgence has anything to do with negotiations with Israel, because it would be difficult for it to be unilaterally declared by a Palestinian decision. The bank’s primary mission would be to issue a national currency, and I expect Israel to reject such a currency.

He added, "There are 4 billion Israeli shekels in the Palestinian market, and these return an annual profit of $50 million to Israel. If the PA doesn't obtain Israeli approval or at least guarantee that Israel does not oppose such a step, we would be facing economic sanctions Palestinians can't afford because all of their financial transfers go through Israel.”

The Palestinian banking system deals with only four currencies: the Jordanian dinar, the US dollar, the Israeli shekel and the Egyptian pound.

Palestinians know very well that this may not be the time for a central bank announcement, and there are economic obstacles hindering such an announcement in light of a rupture with Israel and increased tension with the United States.

Reports about the imminent establishment of a central bank may carry an implicit threat to Israel that could plunge the two sides into a new political crisis that would require the international community's intervention. And this is what the PA is aiming for, as it looks for another mediator between it and Israel alongside the United States.