Will Palestine shun the shekel?

Many Palestinian officials consider dethroning the shekel as a necessary step toward limiting Palestine's economic ties with Israel. 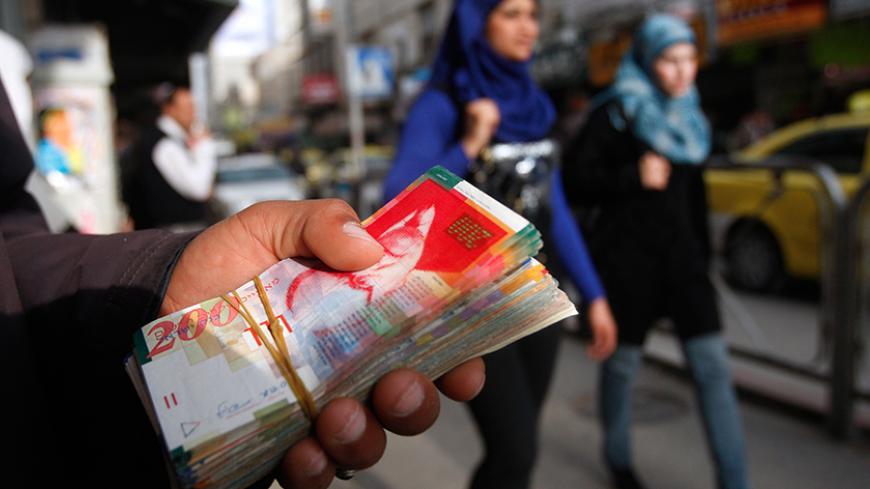 Palestinian women walk past a money changer in the West Bank city of Ramallah, Feb. 16, 2010. Palestinians do not have their own currency, and the US dollar and the Jordanian dinar are both used for some transactions, though the Israeli shekel is most commonly handled in day-to-day cash transactions. - REUTERS/Mohamad Torokman

RAMALLAH, West Bank — The Palestinian Authority (PA) again is considering a foreign currency, such as the US dollar or the Jordanian dinar, as a temporary currency for Palestinian territories, instead of the Israeli shekel now used as a main legal tender.

On Nov. 4, a PLO subcommittee formed to consider limiting security, political and economic relations with Israel proposed taking such action, and the PLO Executive Committee (EC) has adopted the recommendation.

Well-informed Palestinian political sources in the PLO EC told Al-Monitor on condition of anonymity, “Ideas are being exchanged and discussed by members of the Palestinian leadership and some politicians in power to identify the advantages and disadvantages of adopting another currency in Palestine as a main legal tender instead of the shekel, awaiting the issuance of a national currency.”

Palestinian Monetary Authority (PMA) Gov. Jihad al-Wazir had threatened in April 2014 to resort to the US dollar or the Jordanian dinar as a temporary trading currency instead of the shekel when Israeli banks reduced the Palestinian deposit ceiling to punish Palestine for its accession to international treaties. This led to millions of shekels piling up in Palestinian banks.

The Paris Protocol, signed in 1994 between the PLO and Israel, required Palestinians to adopt the shekel as a means of payment. Article 22(a) of the protocol, published by the Palestinian News & Info Agency, specifies, “The Israeli shekel will be one of the circulating currencies in the areas and will legally serve there as means of payment for all purposes including official transactions. Any circulating currency, including the shekel, will be accepted by the PA and by all its institutions, local authorities and banks, when offered as a means of payment for any transaction.”

However, displacing the shekel is necessary to cut financial ties with Israel, said Khalil Rizk, chairman of the Federation of Palestinian Chambers of Commerce.

“It is necessary to have a national decision to replace the shekel with another currency within the framework of breaking the economic ties with Israel. Palestinians are able to dispense with the shekel," he told Al-Monitor.

The Paris Protocol was a five-year agreement set for 1994-1999. Through this protocol, Israel controlled and repeatedly withheld Palestinian taxes to punish the PA.

Regarding the impact of the PA’s abandonment of the shekel on the trade volume, Rizk said, “If the shekel is abandoned, will Israel stop selling us goods in US dollars or Jordanian dinars? The adoption of any other currency will not undermine the trade volume, since we insist on breaking the economic dependency. This has become an urgent matter that will empower and support Palestinian products and increase their share in the domestic market.”

According to economic experts interviewed by Al-Monitor, trade volume will remain subject to the fluctuation of the shekel exchange rate and the payment method to Israel.

According to Wazir, the trade volume between Palestine and Israel through banks stands at 20 billion shekels ($5 billion) per year.

Mohamed Atta, head of PMA's monetary research and policies department, told Al-Monitor that countries that have resorted to adopting another country's currency "either have very high rates of inflation or economic and monetary performance levels below expectations, in general."

However, "This does not apply to Palestine, where the inflation rate — reaching 1.7% in 2014 — is very low compared with neighboring countries and the economic performance is fluctuating depending on the political circumstances.”

Atta explained the advantages of this system, saying, “The adoption of another currency stabilizes the Palestinian monetary and economic performance. It contributes to the increase of the trade exchange with any country using this currency, be it the dollar or the Jordanian dinar, given the reduced trade exchange costs, which leads to greater economic synergy with foreign financial markets, in light of reduced interest rates. This promotes borrowing and investment activities in Palestine.”

Atta also addressed the drawbacks of the system. “This [adoption of the US dollar or Jordanian dinar] will lead to several losses, most notably the loss of one of the symbols of national sovereignty and independence as a result of the failure to issue a national currency; the loss of the so-called return on issuance resulting from the loss of the proceeds of printing the currency and the exchange fees; the loss of the independence of the state banking and monetary policy; and the loss by the Central Bank [the PMA currently serves as the Central Bank] of its function as lender of last resort.”

Bassem Khoury, former Palestinian minister of economy in Salam Fayyad’s government in 2009, told Al-Monitor, “The decision to replace the shekel with the dollar or the dinar must be made based on a political, and not an economic, background within the scope of Palestine’s attempt to break the economic dependency with Israel.”

He said, “Adopting the US dollar or the Jordanian dinar will entail two economic problems that must be solved. The first is dealing with small coins [a quarter of a dollar, a half-dollar]. The second is that the PA gets its funds from two main sources: taxes offsetting proceeds transferred by Israel in shekels to the PA and the salaries of Palestinians working in Israel, which are also disbursed in shekels.

"How will this large amount of money — reaching up to nearly 900 million shekels [$234 million] per month — be converted into another currency?”

Khoury added, “This decision is not impossible, but it is difficult. We can start applying the decision [to abandon the shekel] by forming a national committee of experts to consider the required steps and procedures. This will be an important political message to Israel that we are able to find alternatives.”

The idea of adopting a temporary currency emerged in the wake of sanctions Israel imposed on Palestinians in 2014. Chief among the sanctions is Israel's rejection of financial deposits from Palestinian banks and the withholding of tax money from the PA. After President Mahmoud Abbas signed on April 1, 2014, a number of treaties — most notably The Hague Convention and the four Geneva Conventions — Israel's banks refused to accept Palestinian bank deposits, and shekels accumulated in Palestinian bank safes.

“The shekel accumulation crisis pushed everyone to search for various solutions, such as the adoption of another currency," Atta said. "However, the PMA managed, through its contacts with several parties such as the World Bank, to reach understandings with Israel and Israeli banks whereby 300 million shekels [$78 million] will be transported every month from the Palestinian banks deposits to the Israeli banks.”