Will Palestine get its own currency?

Two decades after the Oslo Accord, and after the issuance of Palestinian passports and the raising of the Palestinian flag at the UN, Palestinians still await their own currency. 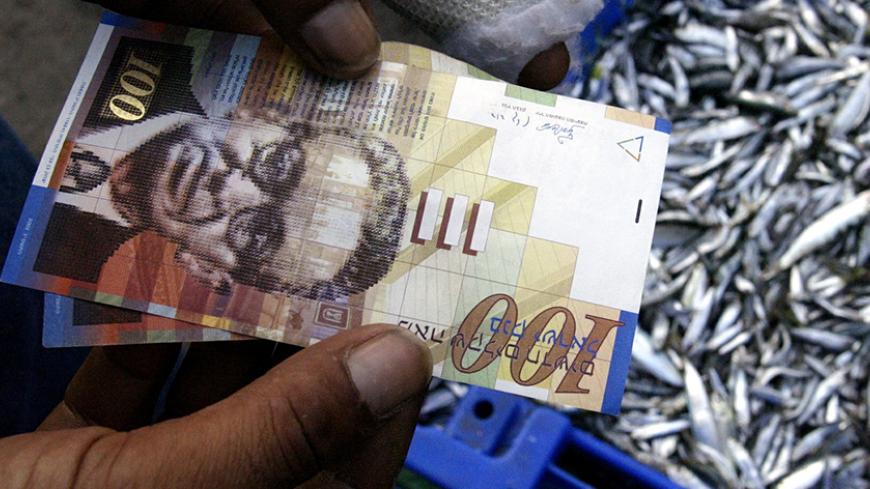 GAZA CITY, Gaza Strip — Twenty-two years have passed since the Oslo Accord, or the so-called Declaration of Principles on Interim Self-Government Arrangements, was signed between the PLO and Israel in 1993. This accord led to the establishment of the Palestinian Authority (PA) and to the creation of a Palestinian political system with a president and ministers in the West Bank and Gaza Strip. Palestinian passports were issued, and the Palestine Monetary Authority (PMA) was established to serve as a national central bank. Moreover the flag of Palestine was recently raised in the United Nations, on Oct. 13, but one thing has yet to be achieved: an independent Palestinian currency.

Nasr Abdel Karim, an economic analyst and lecturer at the Arab American University of Jenin, told Al-Monitor, “This has been impossible as a result of the Paris Economic Protocol, annexed to the Oslo Accord and governing economic relations. This protocol imposed an Israeli approval for the issuance of a Palestinian currency.”

The Paris Protocol, signed in April 1994, created the PMA to act as a financial and economic official adviser to the PA without having the powers vested in a central bank. The protocol, however, empowered the PMA to turn into a Central Bank and issue Palestinian liquidity subject to Israel’s approval. It determined the Israeli shekel as one of the main legal tenders, in addition to the US dollar and the Jordanian dinar, in the Palestinian market.

Jihad al-Wazir, the governor of the PMA, told the Maan News Agency on June 13 that the World Bank and banks of the world are dealing with the PMA as the sole supervising authority over the Palestinian banking sector. “The promulgation of a Palestine central bank law does not mean that a national currency will be issued, since this requires a national decision,” he said.

Wazir added, “We have a sovereign legal right to approve a legal tender of our choice and to subsequently decide, of our free political will, the form of the monetary system that suits our economy, rather than maintaining the current monetary and economic dependency on Israel.”

Al-Monitor tried to communicate with PMA officials on several occasions. A meeting was scheduled with one of its advisers, whom we were not able to reach by phone.

Regarding the PMA and its efficiency, Abdel Karim said, “Indeed, the PMA’s staff and organizational structure have evolved, but this development is not enough to issue an independent currency. Several factors are needed to support the Palestinian currency, including a strong economy that relies on Palestinian exports to ensure an efficient commercial balance and a reserve of gold and foreign currencies that guarantee the Palestinian currency's strength. However, the most important factor is getting rid of the reliance on the Israeli economy.”

He asserted that the most important factor for the success of the Palestinian currency is the citizens' trust in this currency, whose function must not be limited to daily use, but should include savings, investment and long-term contracts, in order to find wealthy purchasers. “This is why we must be careful and prudent when issuing a national currency so that the losses arising from its existence do not exceed the losses incurred as a result of its inexistence,” Abdel Karim said.

Rajab confirmed that the issuance of a national currency is a symbol of sovereignty, independence and economic decision-making freedom. He suggested several denominations for this Palestinian currency, saying, “It may be called Palestinian pound, Palestinian dinar, Palestinian riyal or even Palestinian lira. The denomination remains a formality depending on the Palestinian political decision.”

Adnan al-Irshi, owner of the al-Irshi exchange office in Gaza City, told Al-Monitor, “The most traded currencies by citizens in Gaza are the shekel, the dollar, the dinar, the euro and the UAE dirham, but the dollar is the most trusted currency, especially in remittances and savings, while the shekel comes in last place.”

The question that arises here is whether Palestinian citizens can trade in these currencies and exclude the shekel. Abdel Karim said, “Trading in other currencies and excluding the shekel falls within a specific economic logic in light of the large number of remittances by expatriates and foreign donations to the PA in euros or dollars. This, however, requires increasing Palestinian exports to strengthen foreign currencies in commercial transactions in the Palestinian market and to have a foreign currency basket.”

He added, “However, the shekel is the strongest and most traded currency given the long-term intersection between the Palestinian and Israeli economies. Palestinians who work inside Israel pour millions of shekels into the Palestinian economy, in addition to the tax revenues disbursed by Israel to the PA.”

Palestinian citizens were able to boycott all Israeli goods and products and replace them with national or Arab or other foreign products. Yet no one has succeeded in boycotting the Israeli shekel. Perhaps another 22 years are needed to have a strong economy and an independent Palestinian currency issued by virtue of a national decision and not an Israeli decision.