No Prospects for Palestinian Currency 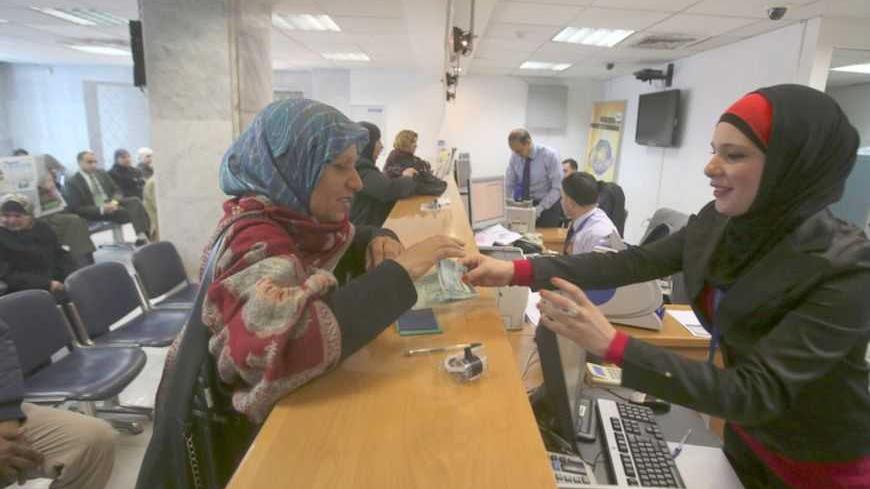 A Palestinian woman makes a withdrawal at the Housing Bank for Trade & Finance in the West Bank city of Ramallah, Jan. 22, 2013.

Reinstating the Palestine pound has long been a dream for Palestinians. Nevertheless, amid the Palestinians’ eagerness to consolidate their sovereignty and in view of the reality of the Palestinian economy that is controlled by Israel, not to mention the losses and challenges that could result from such a step, it seems that this Palestinian dream still has a long way to go before becoming a reality.

During the era of the Ottoman Empire, the Ottoman lira was the currency circulated in Palestine. With the beginning of the British Mandate, the pound sterling was introduced and was linked to the Egyptian pound. In the late 1940s, the government of the British Mandate decided that the time had come to issue a Palestinian currency. This decision, however, was strongly rejected by Palestinian civil organizations — such as the Christian-Muslim association in Haifa, the chambers of commerce and national forces. They were opposed to this step on the basis that the Palestinian government was not independent, as it operated under the control of the British High Commissioner.

While the Oslo Accords addressed the political and security aspects of the relations between the PLO and Israel, the Paris Protocol that was signed in April 1994 addressed the financial and economic aspects of these relations. According to the protocol, a Palestinian Monetary Authority (PMA) was to be formed and operate as a financial and economic adviser to the Palestinian Authority (PA), without enjoying the powers of the central bank.

Pursuant to the Paris Protocol, the PA was obligated to allow Israeli banks to operate in Palestinian territories, while Palestinian banks were not granted the same rights. The agreement also stipulated that the Israeli shekel shall be one of the main currencies in the Palestinian market, along with the U.S. dollar and Jordanian dinar. Thus, Israel continued to control the Palestinian economy, earning major financial gains.

This is especially true given that there is no significant demand for the Israeli shekel on the international market, despite that it was added last year to Bloomberg’s list of 16 major world currencies. Moreover, the Israeli economy makes $300 million each year in profits resulting from issuing shekels in the Palestinian market.

What’s more, Palestinians receive international support and funding in hard currencies, including the dollar and euro, boosting the Israeli shekel. The PA exchanges all hard currencies it receives as donations for the Israeli shekel at Israeli banks, in order to cover its expenses and the salaries of its employees.  For instance, the PA buys a 200-shekel bill at its market value of $45 while the cost of print does not exceed $0.20.

Moreover, preventing Palestinians from issuing their own currency has inflicted major losses, due the cost of exchange. Palestinians are also deprived of benefiting from the issuance profits, and their economy is subjected to the fluctuations of the Israeli market.

The situation in Gaza is a clear example in this regard. Since the imposition of the Israeli blockade in 2007, after Hamas took  over the Gaza Strip — which Israel has declared “a hostile territory” — Israeli banks stopped dealing directly with banks in Gaza. This has caused a chronic shortage of shekel bills in the Gaza market, which in turn has led to a significant difference in the currency exchange rates between the Gaza market and the markets of the West Bank and Israel. This resulted in the creation of a parallel black market that took advantage of the difference in the exchange rates.

The Palestinian currency: fiction or reality?

According to the Paris Protocol, only upon Israeli approval shall the PMA be granted the powers of a central bank and thus issue a Palestinian currency. Nevertheless, acting as a central bank does not necessarily mean issuing national currency.

It is not simple for Israel to give up the benefits it receives as a result of the absence of a Palestinian currency. On the other hand, it is not rational to issue a national currency without acquiring the means to protect it, or without backing it by gold or other hard metals to ensure its stability.

It is true that issuing a national currency would bring major benefits, most importantly being able to apply fiscal and monetary policies that serve the state’s development plans. However, issuing a national currency is not a luxury.  It is an indication of the sovereignty of a state. Nevertheless, this should be performed within a rational economic vision stemming from national, political and developmental interests.

The pertinent question, however, is: are Palestinians prepared to issue their own currency?

It should be noted that the PMA has come a long way in organizing the financial and monetary market in Palestine, as is awaiting this new policy.

Is it in Palestine’s best interest to issue a national currency in light of the Israeli occupation and the restrictions imposed on border traffic, exports and trade with the outside world, not to mention the Palestinian fragmentation under the weight of the financial crisis plaguing the PA, which depends on the unsustainable funds of the donors?

In autonomous states, the central bank and its affiliated financial institutions are independent of the government. This makes the Palestinian case even more complicated, as the Israeli government controls the Palestinian economy, as well as the financial and banking sectors.

It seems that the reasons behind the rejection of issuing the Palestinian pound during the British mandate remain valid. The times have changed but the reasons are the same. Issuing a Palestinian currency is a dream that depends on Israeli laws and is crippled by internal Palestinian division.