New Class of Palestinians Get Rich On Gaza Tunnel Trade

The lucrative trade in contraband through Gaza's tunnel network has produced a new class of wealthy Palestinians, writes Omar Shaban. 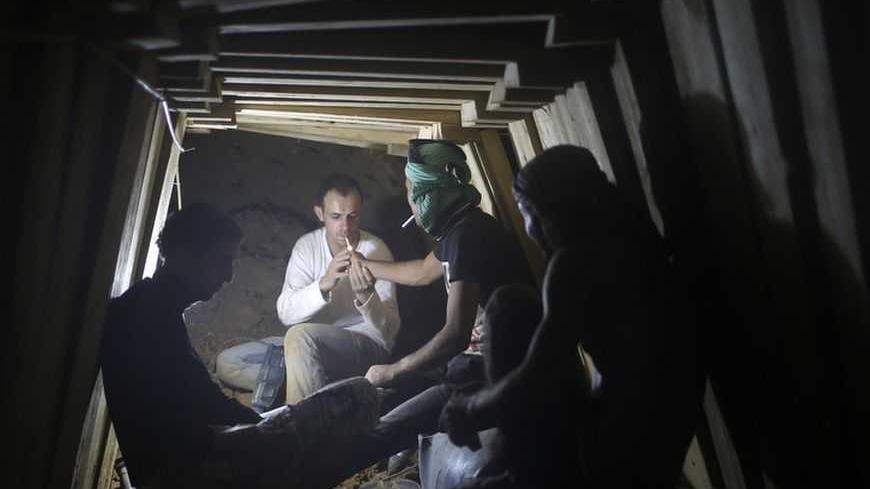 Palestinians smoke cigarettes as they work inside a smuggling tunnel dug beneath the Egyptian-Gaza border in Rafah, in the southern Gaza Strip, Nov. 26, 2012. - REUTERS/Mohammed Salem

One of the challenges for reconciliation between Hamas and the Palestinian Authority (PA) is to reaccommodate 55,000 PA employees — who had been asked to refuse to work with the Hamas government — in the Gaza Strip.  Another important challenge is how to assimilate hundreds of newly rich Palestinians who have amassed vast fortunes from illegal trade as well as legal economic activities, and re-incorporate hundreds who had halted economic activity because of the blockade.

The tunnels are not new

According to the Israeli Ministry of Defense, the tunnels located beneath the Gaza-Sinai border have existed since the mid-eighties. There were only a few, primitive tunnels when they first appeared, used to smuggle contraband such as weapons, drugs and individuals banned from accessing legal crossings.

Tunnels became a central and effective phenomenon since the imposition of the Israeli blockade on Gaza in June 2007 following the Hamas takeover of the Gaza Strip. Their numbers swelled to 1,200, extending beneath a strip of the border 12 kilometers [7.5 miles] long and 700 meters [765 yards] wide. The function of these tunnels has changed as well. They have became a key source for the entry of thousands of vital goods, and an important source of revenue for the Hamas government in Gaza.

However, the importance and numbers of these tunnels decreased in June 2010 when the Israeli government was forced to ease the blockade under international pressure after the Israeli navy attacked a fleet of ships, mainly Turkish, on May 31, 2010 carrying international activists, mostly Turks. The Israeli attack led to the death of a number of Turkish activists and increased tensions between Israel and Turkey.

Although it is illegal, tunnel trade has helped to ease the effects of the Israeli blockade on the Gaza Strip by providing hundreds of basic goods, such as infant formula, school supplies, and construction materials. However, it has also produced negative effects and behaviors, which will take Palestinian society many years and tremendous efforts to address.

New wealth and forms of investment

One direct result of tunnel trade is the formation of a new class of wealthy individuals who were able to accumulate massive fortunes in a short period of time. Numerous reports have claimed more than 1,000 new millionaires. The emergence of this class has caused fundamental changes in the forms of economic activity in the Gaza Strip, and changed the system of values ​​that govern society.

Because this class lacks experience in business management, their investments have been mostly traditional, such as the purchase of land and real estate and purchasing luxury cars, driving prices up. Moreover, this class managed to gradually gain political and cultural influence in the Gaza Strip community. As usual under such circumstances, this class has sought to establish connections with the authorities to obtain protection and influence.

The shift of economic power from the center to the periphery

The city of Gaza, which is home to a third of the strip’s population, is a center of both traditional and modern economic activity. This shift resulting from tunnels located under the border strip between the Palestinian town of Rafah and Sinai led to a transfer of economic activity and the accumulation of capital from the city of Gaza to Rafah in the far south of the Gaza Strip.

On the other hand, in an attempt to achieve profits, large capital shifted from the traditional families living in Gaza city and its surroundings to the Rafah area. Partnerships were forged between the business class that have experience and knowledge in economic activity with a new class that has expertise in digging tunnels and in trade, in addition to family ties with the tribes of Sinai, vital for work in tunnel trade.

Furthermore, there was a noticeable transition of the new wealthy class from the surroundings to the center in their search for opportunities to put their huge fortunes to use or for influence and control. The town of Rafah, located in the far south of the Gaza Strip, has become one of the richest areas of Palestine, after having once been classified in human development reports among the poorest areas of Palestine.

Human losses and a change in values ​​and concepts

The tunnels caused a fundamental change in the social dynamic, and in the system of values ​governing society. The tunnel trade contributed in spreading the idea ​​of fast wealth among youths and businessmen. This prompted thousands of small-capital owners and businessmen to enter the field, in addition to tens of thousands of workers who lacked job opportunities other than working in this extremely dangerous field.

Fast wealth from the tunnel trade provided an additional example of the uneven relationship between hard work and return. A young man in his thirties can be seen driving a luxury car, while a university professor would have to work 20 years to be able to buy the same.

In order to lift the siege on the Gaza Strip — which would entail ending tunnel trade and resuming trade between the Gaza Strip and Israel as it was in the past — the Israeli government stipulates that the Hamas government recognize the Quartet conditions, or the return of the PA, which is recognized by Israel and the international community, to power in the Gaza Strip.

The tunnels may cease to exist if any of these two conditions are implemented. But their effects will remain for many years to come, and Palestinian society will require significant programs and efforts to address them.

An important issue is how to deal with this wealthy class that has gotten used to working under the ground, and does not believe in the need to register at the Chamber of Commerce and official institutions or know how to deal with banks or to forge business partnerships at the international level. The Palestinian economy will also need these large amounts of money whose owners are staying outside the framework of the banking system, as well as address the issue of integrating the class that has experience in business but lack capital.

One of the expected challenges is how to keep their wits and their money in order to contribute to the reconstruction of the Gaza Strip, stimulate economic activity, and address the distortion that has struck the social fabric.