Can Palestinians free themselves of the shekel?

The new government of Prime Minister Mohammed al-Shtayyeh would like to drop the shekel, which is not an easy proposition given the many ways the Israeli currency enters the Palestinian economy. 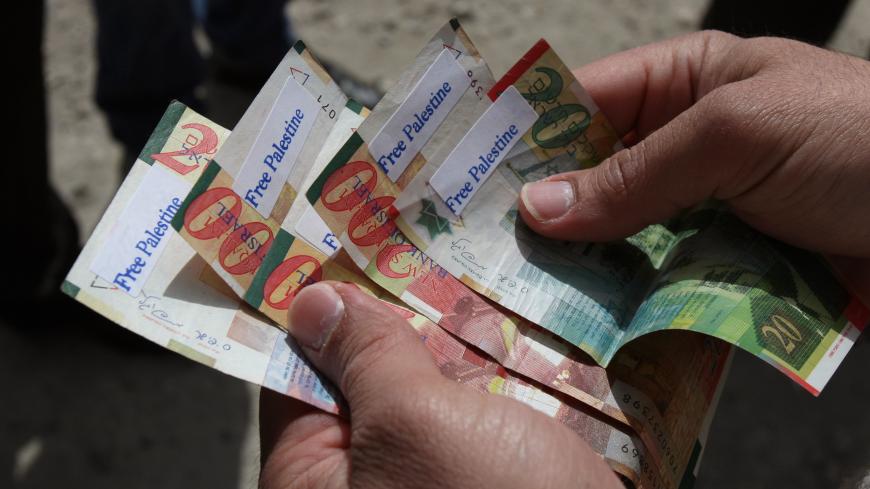 RAMALLAH, West Bank — On April 13, Palestinian Prime Minister Mohammed Shtayyeh made his first appearance on Palestine TV after taking office and pledged to seek alternative currencies for the Israeli shekel, putting his government to the test.

“The Palestinian economy has about 25 billion shekels [$7 billion] circulating in the local economy, but we are not forced to remain dependent on the shekel,” Shtayyeh said. “So one of the central issues we will be working on is forming a team to study dropping the shekel, either by resorting to an encrypted currency, digital currency or other options.”

Such talk about replacing the shekel is nothing new. In April 2014, the Palestinian Monetary Authority (PMA), which serves as Palestine’s Central Bank, threatened to resort to the US dollar or the Jordanian dinar as a temporary currency, when Israeli banks began refusing to take deposits from Palestinian banks after Abbas made Palestine a party to a number of international conventions and joined various UN agencies.

In January 2018, the Central Council of the Palestine Liberation Organization (PLO) voted in favor of ending the Palestinians' economic dependence on Israel, but no concrete actions have been taken in this regard. The following month, the Palestinian Authority (PA) government headed by Rami Hamdallah moved to establish a committee to study transitioning from the shekel to another currency and the possibility of issuing a national currency. The committee is yet to make any recommendations.

The shekel is one of three major currencies used in the Palestinian-controlled territories, alongside the US dollar and the Jordanian dinar, as per the Paris Protocol on Economic Relations signed in 1994 by the PLO and Israel. The protocol's Article 4 obliges the Palestinians to use the shekel as “one of the circulating currencies in the Areas and will legally serve there as means of payment for all purposes including official transactions.”

PMA Governor Azzam al-Shawa spoke to Al-Monitor about introducing national and digital currencies. “In order to issue a currency that is able to withstand and maintain its value and strength, it is necessary to establish some preconditions, most importantly, the fundamentals of a strong, resistance economy that is able to sustain itself,” Shawa said. “The PMA issuing a national currency, along with a digital one, requires specialized efforts, studies and infrastructure, as well as raising public awareness and changing the pattern of the prevailing culture.”

Among the major challenges hampering the government's efforts to dispense with the shekel is that currency's use for payments and official government transactions. PA employees receive their salaries in shekels, and the Israeli government transfers the taxes it collects on behalf of the PA in shekels. In addition, the 131,000 Palestinians working in Israel and in Israeli settlements receive their salaries in shekels. According to PMA Deputy Governor Riyad Abu Shehadeh, these workers pump an estimated 800 million shekels ($248 million) into the Palestinian economy each month.

As a result of this cash flow and the Central Bank of Israel's refusal to accept deposits from Palestinian banks, the latter are suffering from an overaccumulation of shekels. Shtayyeh remarked on PalestineTV that Palestinian banks are sitting on 4 billion shekels ($1.12 billion) that cannot be exploited for annual interest.

Samir Halilah, an economic expert and former CEO of the Palestine Development and Investment Company, told Al-Monitor, “It is not easy to withdraw shekels from the market, in light of [Palestinian] workers in Israel and given the fact that 70% of our trade with Israel is in shekels. Yet, we can change the law that makes the shekel our official currency in which official transactions are carried out.”

As an alternative Halilah asserted, “The PA should resort to using all three currencies, the dollar, dinar and shekel, as one of the options for it to emerge from the crisis of only using the shekel as its official currency. This, option, if adopted, would give the PA greater flexibility and allow it space to act according to its economic interests.”

Nasr Abdel Karim, professor of finance and economics in the graduate studies department at the Arab American University, in Jenin and Ramallah, told Al-Monitor, “Dispensing with the shekel is difficult, because it requires restructuring economic relations with Israel, and then completely disengaging, which is currently out of the question since it requires long negotiations between the two sides to arrange these procedures.”

As an alternative, Abdel Karim cited the possibility of reducing the use of the shekel. That, he noted, however, would require a tremendous effort on the part of the PA.