Hayati, a National Bank program, is making it possible for Palestinian women to start their own businesses, join the labor market and gain financial independence. 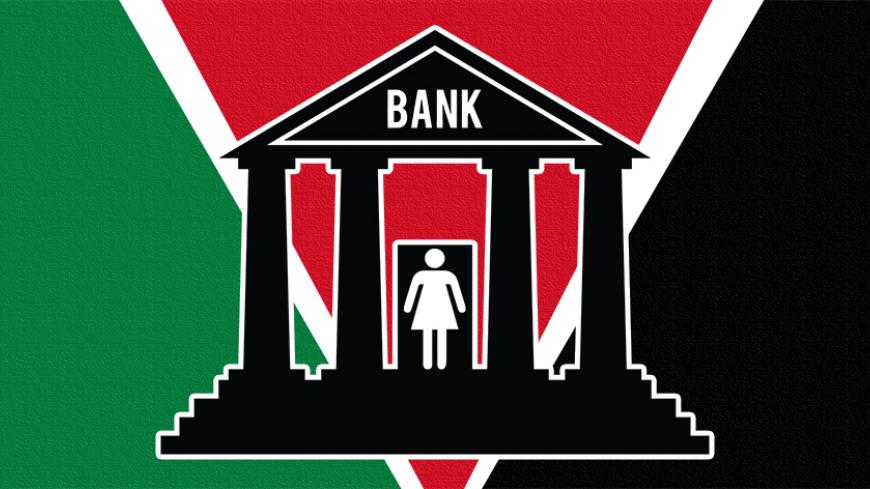 GAZA CITY, Gaza Strip — On July 5, the Ramallah-based National Bank (TNB) launched its latest version of Hayati (My Life), a program that targets women. The privately owned bank first introduced the program in 2015, focusing on savings accounts and offering a limited number of 0% interest loans for modest amounts. The revamped program, the first of its kind in Palestine, offers comprehensive banking services for women, including accounts of all types, credit cards and low-interest housing, personal, car and small-business loans.

The program framework stems from a February 2016 memorandum of understanding signed by Abir Awda, the Palestinian minister of economy, and Rajaa Rantision, the board director of the Ramallah-based Business Women's Forum (BWF), to increase women’s participation in the economic arena.

The initiative aims to empower women by enhancing their financial capabilities in the management of private business projects and to strengthen women’s roles and independence in a society that continues to hinder their joining the labor market. Some Palestinian women still have an outdated understanding of saving and therefore continue to buy gold and hoard money at home.

TNB general manager Ahmad al-Haj Hassan told Al-Monitor about an internal bank study that led to its first women's savings program under Hayati. “Women's consumption patterns differ from that of men,” he said. “Moreover, the study suggested that women’s savings rate was higher than men's, but they tended to save in traditional ways, not using banks.” According to Hassan, women who saved did so to feel financially secure, to have a steady income reserve and to complete their education.

Hassan said of Hayati, “TNB has financed 120 women's projects worth $2.5 million, benefiting nearly 400 women over the past two years as part of the old program, by offering a limited number of loans. After a detailed feasibility study of the clients’ projects and their ability to repay, the bank would provide women with zero interest loans.”

He also said that the bank relaunched the program to include comprehensive and new services commensurate with the needs of women, including credit and debit cards and current accounts at a small cost and without commissions. With the new program, the bank also offers loans at half the going interest rate and the possibility of repaying in 10 installments instead of 12 per year.

As for the bank’s previous offer of zero-interest loans, Hassan said the bank could only afford them for a limited period of time, as they could negatively affect the bank’s growth. That is why the new program offers more loans at a reduced interest rate rather than zero interest for a limited number of customers.

Under the new program, women can apply for any type of loan. The loan conditions can be found on the program’s webpage. The 2015 program issued loans for small-scale projects only to women who met a set of limited criteria. The TNB of course assesses how successful a projected business might be, the ability of the borrower to repay the loan and the nature and possible uniqueness of the project. TNB set up a Hayati-related webpage where women can follow up on and track their financial transactions.

At the annual awards celebration held by the magazine Banker Middle East in Dubai May 11, TNB won Best Bank for Women's Empowerment because of its Hayati program.

Amale al-Natche from Nablus told Al-Monitor that she had been thrilled to hear about Hayati's expanded loan program and plans to apply for a car loan. She has wanted to buy a car for years but did not have enough money, and the going bank interest rates were too high.

Ramallah resident Bahia Fleifle told Al-Monitor, “I joined the [old] program in June 2016 so I could benefit from the zero interest loans to start my hand embroidery project. [The business] gives me a sense of self-fulfillment and allows me to support my family.”

Fleifle said she works from home and remotely employs 40 other women, who also work at home. She provides them with the raw materials. Fleifle promotes the embroideries through her network of personal connections at home and abroad.

She noted that she had been working in embroidering since 1990 with associations and institutions, but earning a pittance. She could not afford to start a business enterprise of her own, but now she intends to open a shop in the United States with the help of an acquaintance who lives there.

Safaa Mohammed told a similar story: “I applied for a loan as part of the [old] TNB program in October 2016, so I could start my own business making custom-printed paper cups in different sizes for institutions and companies.” Mohammed said she started thinking about owning her own business after her divorce 12 years ago. She worked in pastry shops and had other irregular or temporary jobs, and therefore could not save enough to pursue a business.

“I got a zero-interest loan from TNB, which allowed me to buy the necessary machinery and employ seven workers, who are now, in turn, supporting their families,” Mohammed said. “The equipment and machinery were set up in the yard near my house.”

She stressed that she has faced difficulties in terms of society’s view of women, whose potential continues to be disregarded in the labor market. Mohammed said she was able to prove herself with the quality of her products, noting that she wants to expand her project. “I have been able to make a decent income, prove myself socially and develop my administrative and financial potential,” she said.

Doaa Wadi, BWF executive director, told Al-Monitor, “The participation of women in the economic process plays a major role in increasing family income and improving the economic and social conditions of their families. This is not to mention that women become independent within society.”

She noted that programs like Hayati contribute directly to improving the economic status of women, giving them the proper incentives to enter the labor market.

“Working women have a say in family decision-making and a direct role in it, unlike nonworking women, who often are oppressed at home, especially in a patriarchal society, which undermines women’s work and ability to bring about change,” she said. “The government should create a supportive environment for women’s participation in the labor force. Civil society institutions should also work on creating material, moral and educational incentives for women to participate in the economic process.”

Wadi noted that Labor Law No. 7 does not discriminate against women working, but patriarchal Palestinian society limits the application of the law. In the eyes of society, women are not capable of taking the lead like men, which limits them to stereotypically “female” fields of work, such as teaching and nursing.