International transfers to charitable organizations in Palestine have been halted on charges of ties with Hamas, affecting the orphans who are reportedly the main beneficiaries. 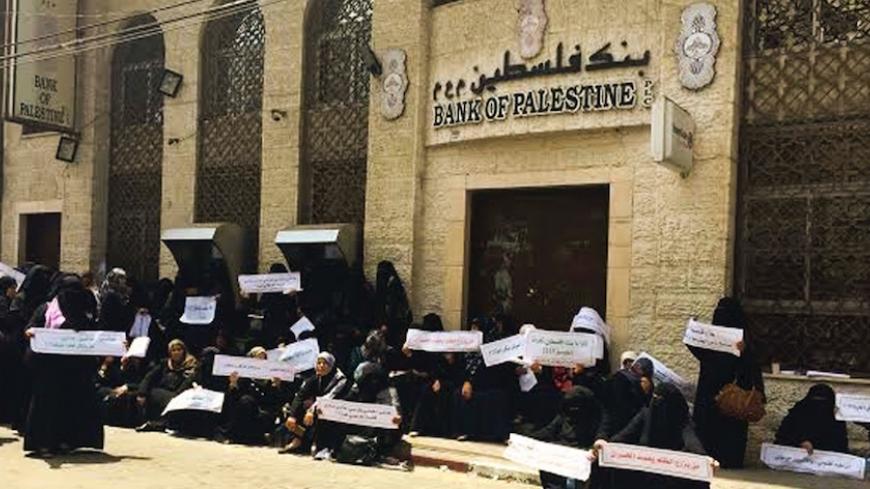 Protesters in front of a bank branch in Khan Yunis demonstrate against the freezing of accounts of charities supposedly linked to Hamas, in the Gaza Strip, May 14, 2015. - Hana Salah

KHAN YUNIS, Gaza Strip — Banks in the Gaza Strip have refused to publicly disclose the reason behind their policy of not accepting money transfers sent from abroad to charitable and Islamic associations in Gaza. However, since the blockade on Hamas began in 2006, these banks have been afraid of the potential US sanctions they could incur if accused of providing financial facilities for Hamas, which is on the US list of terrorist organizations. In 2013, a US court imposed sanctions on the Arab Bank on charges of providing banking services to Hamas.

Recently, a number of protests against these policies were organized by Islamic charities and held in front of the Bank of Palestine in the Gaza Strip.

In the first protest, held on May 14, widow Mona al-Shaar stood alongside dozens of other widowed mothers and mothers of those with disabilities in front of the Bank of Palestine in central Khan Yunis. Their protest was directed against the bank’s policy of freezing the accounts of some charitable organizations operating in Gaza that were transfering monthly financial aid to those whose fathers had died from charities outside Palestine. This policy had lost Shaar the only source of funding for the four children she had raised alone since her husband died four years ago.

During the protest, one of the widows provided Al-Monitor with a statement issued in the name of “Widowed mothers, mothers of those with disabilities and needy families in Gaza,” a yet-unregistered organization including members of the protesting factions. The statement noted, “The humanitarian associations provided for orphans, the disabled and families that had lost their breadwinners. They supported them for decades, making sure they did not have to beg or request charity.”

The statement continued, “Unfortunately, we were surprised by the suspension of this humanitarian assistance from these associations because the Bank of Palestine closed the accounts of many associations, returning the transfers made to these accounts and refusing to accept them.”

Shaar expressed her anger at the Bank of Palestine’s decision, saying, “Our children have lost their fathers; they’re not terrorists. Why is the bank cutting off our only source of income? Where will we take our children and what will we feed them? How will we take care of ourselves?”

The transfers provided by the charities represented the sole source of income for many widows who suffer from difficult economic conditions as a result of the Israeli blockade. Their protests have been repeated several times over the past two weeks in front of all of the bank’s branches in the Gaza Strip.

Local banks were forced, under US pressure, to not deal financially with the previous Hamas government in any way. This led to the establishment of two new banks in Gaza in 2008, the Palestine Production Bank and the Islamic National Bank. These banks were created to facilitate local banking transactions associated with the activities of the Hamas government, such as salary transfers. The two banks, however, did not have official licenses from the Palestine Monetary Authority to receive international transfers.

Asmaa al-Kurd, the official in charge of the orphans division at the Salah Islamic Charitable Association, told Al-Monitor, “During the past year, the Bank of Palestine froze the accounts of 32 charities operating in the Gaza Strip, including that of the Salah Association. The bank also refused to open new accounts for 50 charities, in addition to returning in the past month money transfers totaling $2 million that had been sent from donors and associations outside Palestine to the poor and orphans.”

Kurd added, “The bank’s policy of closing the accounts of charities is part of the siege on Gaza, which is aimed at sparking a revolution of the poor and widows against the Gaza government.” Hamas still manages the Gaza Strip as a result of the stalled national reconciliation.

She pointed out, “[The blockage] of these money transfers led to depriving 40,000 children of a source of income. Two-thirds of them are orphans, while the other third come from poor families.”

Officials at the Bank of Palestine refused to comment to Al-Monitor on the reasons for closing these charities’ accounts. However, a press release issued May 21 by the bank noted, “The bank is committed to international standards and practices in the banking business,” saying that it “did not prevent any incoming transfer for orphans and the poor.”

In the statement, the bank stressed, “Transfers for humanitarian and social cases, as well as for orphans, are currently accepted through official institutions.”

However, Kurd says that these associations are not affiliated with the Hamas movement and provide their services to the orphans of casualties and collaborators, as well as those whose fathers died of illness or natural causes, without discrimination. Thus, according to her, the bank’s policy deprives these orphans of services such as the support program, summer camps, Eid clothing, school clothing, backpacks and health care that is provided to all through 11 charitable private schools for orphans in the Gaza Strip.

A source from the Charitable Associations Gathering in Jabaliya told Al-Monitor on condition of anonymity that the Bank of Palestine’s policy to refuse international transfers sent to local charities is applied by the other local banks — such as Quds Bank, Cairo Amman Bank and the Palestinian Islamic Bank. These banks all refuse to open accounts for associations whose accounts were closed by the Bank of Palestine, said the source.

Kurd noted, “The bank is resorting to undercover methods to verify the identity of beneficiaries of aid and bank transfers.” She accused the bank of “working as an intelligence agency against these associations.”

A source from the Interior Ministry told Al-Monitor on condition of anonymity, “The Interior Ministry requested clarification from the Bank of Palestine regarding its policy toward some charities after we received a formal complaint against the bank. This came after [the ministry] obtained a statement from the Palestine Monetary Authority denying that it had given instructions to the bank to halt these transfers.” According to the source, Hamas, which still controls the border crossings, is considering preventing Bank of Palestine employees from leaving Gaza through the Erez crossing.

Despite the offer made by the Charitable Associations Gathering to the Bank of Palestine — which involved it accepting the transfer and sending it to the beneficiaries directly instead of the charities doing so — the group claims its offer was turned down by the bank.

There was an explosion in front of a Bank of Palestine branch in the northern Gaza Strip on May 21. While it may have been related to the series of bombings between Hamas and the Salafists — and not the result of tensions over the bank’s policy — this incident is a sign of increasing tension and stress in the besieged Gaza Strip.

On May 26, the Union of Palestinian Charitable Organizations announced the suspension of protests to make room for mediation efforts by local civil society organizations to resolve the situation.

Amid the ambiguity of the justifications offered by official bodies and banks, some observers believe that the economic blockade imposed on the Gaza Strip is part of the Israeli blockade policy imposed on Hamas and is turning into the collective punishment of Gazans, described in an Oxfam report.