The Hamas government’s publication of a budget is encouraging, yet only a small step on the road to achieving an acceptable level of transparency, competence and professionalism, writes Omar Shaban. 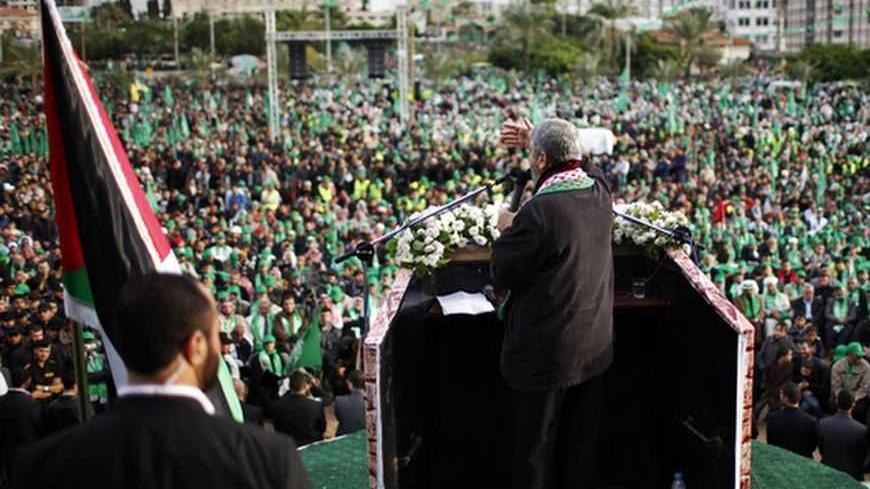 Hamas chief Khaled Meshaal gives a speech during a rally marking the 25th anniversary of the founding of Hamas, in Gaza City Dec. 8, 2012. - REUTERS/Ahmed Jadallah

From movement to government

Until 2007, Hamas took care of its members — who at the time did not exceed 10,000 — and of its educational and social institutions with a budget that did not exceed $4-5 million per month. Since it rose to power in the Gaza Strip in June 2007 after infighting with the Palestinian Authority, however, its government has become theoretically responsible for more than a million and a half Palestinians with an annual budget that stands at $890 million for 2013.

It is assisted by dozens of international Western, Arab and Islamic institutions that carry out many relief and developmental projects in the Gaza Strip. It is also assisted by the Palestinian Authority, which still pays the salaries of some 55,000 of its employees in the Gaza Strip. Add to this the programs aimed at helping poor families and contributing to the supply of electricity and medical assistance.

The Hamas government has been trying hard to draft an annual budget. It submitted its first budget in 2009, which was valued at $428 million but described as being very primitive in comparison with other government budgets.

The Hamas government kept preparing and submitting an annual budget whose numbers steadily rose. In 2010, it reached $540 million. In 2011, it amounted to $630 million, climbing to $769 million in 2012 until it reached $890 million in 2013. The Hamas government's assiduous efforts to provide a budget in a similar fashion to other governments is very telling, but the road to reach the required level of professionalism, transparency, accuracy and community control is still long.

The Hamas government submitted in late December of last year the 2013 budget to its legislative council. The budget, which amounted to $897 million, projected $243 million in domestic revenue, representing 27% of the total budget, with an estimated deficit of $654 million, or nearly 73%, to be covered by foreign donations.

The general budget of the Hamas government consists of the following four items:

There has been an increase in the budget allotted for security in comparison to other sectors:

A total of $241 million (30%) of the budget was allocated to the security and public order sector, while $281 million — or 34% of the budget — was allocated to a number of key ministries. These included the Ministry of Finance and the Ministry of Religious Endowments, as well as the Water Authority and the Retirees Fund. Meanwhile, $12 million, 1.5% of the budget, was allocated to economic development. In this context, there is little difference from the Palestinian government in Ramallah, which allocates more than 30% of its budget to the security sector. This confirms that security is a top priority for both governments.

It has been observed in multiple budgets prepared by the Hamas government in Gaza that what has been achieved in terms of revenue and expenditures is significantly different from the estimated amount in the budget. The estimated revenue for 2012 was about $173 million, while the revenue achieved was $221 million, a 28% increase in the estimated rate.

While expenditures were estimated at $869 million in the past year, the actual spending did not exceed $445 million. This obvious discrepancy between the estimates at the beginning of the year and what had actually been spent at the end of the year reflected either the modest professional experience in financial planning on the part of the government, or a deliberate attempt to boast expenses in order to gain further support.

While the budget describes expenditures in detail, mentioning the allocations for each ministry, it does not provide a clear report on revenue sources or the percentage of foreign contributions and donations to the total revenue.

Many members affiliated with the Hamas government and its Palestinian Legislative Council have previously confirmed that “the government of Hamas in Gaza relies on four main sources of funding. First, tax revenues, the government’s connections, service sectors and customs. Second, the government takes advantage of some evacuated settlements to develop the agriculture sector. Third, the government has some volunteer staff and others who donate money. Fourth, there is Arab and Islamic support for Gaza, including donations from large institutions to the government.”

However, the budget should mention the details of the government’s income in order to facilitate follow up and evaluation.

The insistence of the Hamas government on preparing and submitting an annual budget is seen as an attempt to confirm that it has been acting according to the standards and norms of an actual government. The preparation of an annual budget is also seen as a major tool to gain recognition, and an effort to prove that the government is managing the Gaza Strip in an orderly and professional manner.

The Hamas government presented its budget to its Legislative Council, which consists solely of Hamas MPs, as no other MPs have participated in the Palestinian parliament’s sessions since the eruption of internal strife. Hamas receives approval from the MPs of its own Legislative Council, which can be considered self-approval without any general debate on the budget’s items. Although this governmental process is significant, it remains incomplete without the participation of the entire social spectrum.

The budget does not show the dividing line between the Hamas government’s budget and that allocated for the movement itself. There are major overlapping activities between both entities, especially at the level of personnel in the security services and police, not to mention the services provided by the Hamas movement’s religious, social and political wings.

The budget does not include the major projects implemented by international institutions, especially those that are underway in coordination with the Hamas government. For instance, one must mention the Qatari funding for reconstruction projects granted by the emir of Qatar, who pledged to donate $450 million during his visit to Gaza in September 2012. The government said it did not include these projects in its budget because the Qatari government would fund these projects directly. The general budget must include all revenues, both cash and in-kind.

It is good that the Hamas government is preparing its budget, but more importantly, it ought to not stop there. The Hamas government should implement its budget and include the entire social spectrum in any relevant debate. The balance sheet is nothing more than a static image, like an X-ray that determines the status of a sick person at the moment of taking the picture, without indicating the subsequent stages. Participation in preparing and implementing the budget serves as an important tool in monitoring the fiscal and monetary policies of any government. The fact that the government of Hamas seeks to take credit for applying professional standards and transparency is not sufficient, as this does not show the opinion of regulatory parties and lacks community control.