Gazans forced to sell their belongings

The harsh economic crisis that has been worsening in the Gaza Strip due to the Israeli blockade and the PA’s financial deficit has forced Gazans to sell their belongings to avoid begging for money. 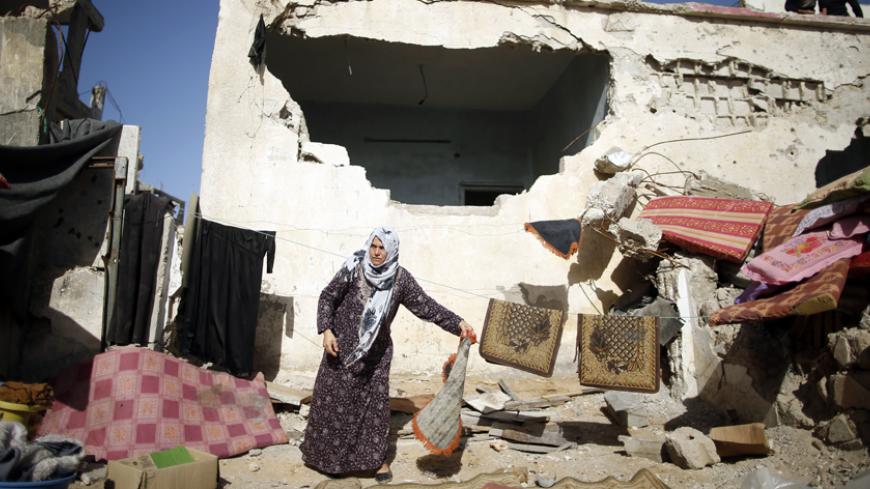 A Palestinian woman standing outside her damaged house watches a demonstration calling for Gaza reconstruction and against the United Nations decision to suspend payments for Palestinians, in Beit Hanoun in the northern Gaza Strip, Jan. 30, 2015. - REUTERS/Mohammed Salem

GAZA CITY, Gaza Strip — Poverty has led Khaled Selim, 48, to sell some of his furniture at a very cheap price in order to provide for his family members and stop them from reaching the stage of begging.

Selim, who works in a concrete factory that was destroyed during the war on Gaza, told Al-Monitor, “I had no option but to sell my furniture as I ran out of all the money I had saved. I had no money left to cover the needs of my family. I cannot afford my wife's medicine, and she is suffering from cancer.”

Selim said that his family is now sleeping on the floor as he had to sell their beds, and that his unemployment will force him to sell his refrigerator in the near future: “What is the point of having a refrigerator when it’s always empty?”

The suffering of Selim, who lives in Gaza City, mirrors the suffering of the majority of the 1.8 million Gazans. They are suffering from multiple severe financial crises that have affected the already devastating Palestinian economic situation.

Asked about these crises, economist Samir Hamattu explained that these result from various political and economic conditions, including the Israeli blockade, the war on Gaza, the closure of border tunnels with Egypt, the closing of the Rafah border crossing, Hamas-Fatah political differences and the financial crisis currently plaguing the Palestinian Authority’s institutions.

Hamattu told Al-Monitor, “The Israeli siege, which has been ongoing for eight years, has led to a tragic reality. Subsequently, the war destroyed all the economic and development facilities and spread despair and frustration all over the place.”

For her part, the director of the Palestinian Banking Corporation and the Palestinian Development Fund in the Gaza Strip, Nebras Bseiso, said in an interview with local television, Wattan, in November, “The Israeli aggression on the Gaza Strip caused the unemployment of nearly 12,000 workers as a result of the destruction of industrial facilities, and another 1,200 due to the closure of the border tunnels with Egypt.”

She further said, “The PA cannot accommodate more than 7% of the graduates per year.”

The unemployment rate (unemployed people aged 15 years and over, as per the Palestinian definition) is 42.8% in the Gaza Strip while the poverty rate is 65%, according to Palestinian Central Bureau of Statistics data from the fourth quarter of 2014.

In the popular Firas market in downtown Gaza, Mohammed al-Aaraj, 29, stood in front of a computer and a small swing with a sign that read “For Sale.”

Aaraj, a primary school teacher who lives in Gaza City, told Al-Monitor, “The Palestinian unity government’s decision not to pay the salaries of the staff appointed under the previous Hamas government has impoverished me terribly and prevented me from being able to provide for the needs of my family, consisting of four members, including two children.”

He pointed to the swing and said that it was a gift from his mother when he fathered his first child two years ago, adding, “By selling this swing, I deprive my kids of the right to play, but I have no other option. It is a luxury we cannot afford any more. What I fear the most is that I might reach a point where I will have to sell important stuff that I cannot dispense with.”

Hamas appointed about 42,000 employees during its rule in the Gaza Strip between 2007-2014, and they are suffering from difficult conditions as the unity government has not paid their salaries since it took office in June 2014, according to political analyst Iyad Atallah.

Atallah told Al-Monitor, “These employees are victims of political differences between Hamas and Fatah, and due to the persistence of these differences, all reconciliation agreements seem indefinitely frozen.”

He pointed that the Palestinian community witnessed several social and economic developments after these employees did not receive their salaries, and some staff went as far as to sell their furniture. Atallah added that the continuation of this crisis will further spread negative occurrences such as begging.

On the other hand, the PA has been suffering from a large deficit in its financial resources following the Israeli decision on Jan. 3 to withhold the transfer of its tax revenues, which amount to $127 million, in retaliation against the PA’s joining of the International Criminal Court.

During a seminar about the financial impact of the Israeli decision held by the World Bank on Feb. 12, Palestinian Finance Minister Shukri Bishara said that as a result of the withholding of these funds, the PA is losing 70% of its financial resources. “This unfair action will lead to uncalculated consequences,” he added.

On Jan. 29, the International Monetary Fund (IMF) expressed its fear of the repercussions of the Israeli decision and said in a statement, “Economic activity contracted in 2014, following the war in Gaza in the summer and mounting political tensions in the West Bank and East Jerusalem. The mission estimates that real GDP fell by nearly 1 percent, the first contraction since 2006.”

According to Hamattu, the withholding of the PA’s tax revenues is deemed “an Israeli piracy designed to dry up the sources of money for the Palestinians to tighten the siege on them.”

He explained that this procedure has significantly affected the PA staff and their families, and pointed out that citizens are borrowing money from others in order to provide for the needs of their households, and are forced to sell their belongings in order to pay off these debts.

In order to cope with the political and economic problems involved in the financial crisis, citizens have to follow strict austerity measures in order to be able to meet their basic needs.