In light of the repeated Israeli assaults on the Gaza Strip that have destroyed the local economy, some young Palestinians are breeding canaries to overcome poverty and unemployment. 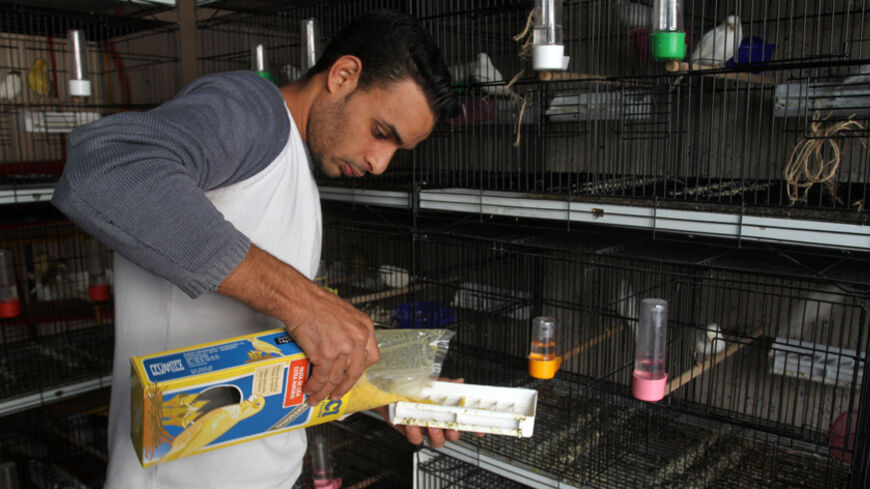 GAZA CITY, Gaza Strip — Ehab Adas, 28, spends most of his time listening to the chirps of his canaries on the roof of his house. The birds are his only source of support for his family of four. One bird can fetch 300 shekels ($80), enough to meet his family's needs for a week. Raising birds is part of a new trend among Palestinians suffering from unemployment and desperate to make ends meet.

“I graduated from university in 2012, and I worked in a cement factory. But the Israeli war destroyed my workplace, and I was left without a job. This forced me to search for another source of income to support my family,” Adas told Al-Monitor.

He explained that breeding birds is cost effective and does not require a lot of effort. “I only have to provide a warm place and food for the birds. I also have to have experience in identifying mating seasons, egg hatching and treatment of diseases,” he said.

According to statistics issued by the Palestinian Central Bureau of Statistics for the second quarter of 2014, Gaza's unemployment rate stood at 44.5%.

The economist Samir Hamattu explained that the high number of university graduates and high unemployment and the poverty rate in Gaza, especially after the recent Israeli war, has pushed unemployed young men toward small, self-initiated projects to secure an income to support their families.

“The unemployed in Gaza feel desperate about the future, especially in light of the numerous economic crises and problems caused by the Israeli war, the suffocating siege and the public sector’s employment freeze on new civil servants due to the crisis plaguing the consensus government,” Hamattu said.

Some young men set nets in border areas to catch birds. This is the case of Jamil Muntasir, 26, who said, “This is a risky business, as we practice our profession within the range of vision of Israeli soldiers, who constantly shoot at us.”

Muntasir told Al-Monitor, “I was once shot in the leg, but this didn’t stop me from catching birds in these areas, because I have no other job opportunity. The high financial return pushes me to take the risk.” He explained that catching and breeding rare birds professionally earns him gold given the small number of experts in the field in Gaza. “Keeping these birds alive and breeding them is no easy task, as it requires expertise that amateurs lack,” Muntasir stated.

According to Hamattu, the urgent need to find work prompts youth to take on risky jobs, as was the case between 2007 and 2012, when digging border tunnels into Egypt attracted thousands of unemployed young men.

For M.Z., who lives in central Gaza City, breeding birds is his main paying job. M.Z., who requested anonymity, told Al-Monitor, “I get these canary birds from Israel and Egypt through illegal means and methods.” He has a collection of European canaries that he was able to smuggle in a few months ago.

A week ago, he sold a European goldfinch for 3,000 shekels ($770), an amount that exceeds the monthly salary of a government employee. The deal brought him a profit of close to 300%. He pointed out that there are collectors from the 'velvet class' in Gaza who are willing to pay more than this to acquire such rare birds.

Israeli warplanes destroyed the bird cages and damaged the contents of the home of Mohammed Abu Ghalyoun, 38, who sustained a financial loss estimated at $10,000.

Abu Ghalyoun, who lives in al-Tuffah neighborhood, northeast of Gaza City, told Al-Monitor, “I had nests containing 15 pairs of the best canary species, such as Gloster, Abyssinian grosbeak and hybrids. I used to reap a good profit from this business, which helped me support my family of seven, but the war killed all my birds.”

Young Ahmed al-Atrash, 32, who also raises canaries in his home, said, “The ornamental birds business does not require opening a licensed shop or executing various financial transactions that the unemployed cannot afford.” He also pointed out that most people in the business use their homes for breeding and social networking sites to market and sell their birds.

Atrash displays his birds on a Facebook page opened by a group of amateur bird venders in Gaza City under the name Canary Gaza, which facilitates sales of birds.

Abdul Rahman al-Omari, 29, said that his relationship with singing birds goes back 13 years. “This is a hidden treasure that could be very helpful in times of need,” he said. He told Al-Monitor, “I was forced to sell all my birds due to a difficult financial hardship I went through. When my distress ended, I started again buying and breeding these birds.”

Hamattu believes that small projects are a success in Gaza as they require little capital and provide a source of income for their owners, helping a few Gazans cope with the crippling Israeli siege.