Several Palestinian factions are clashing over the formation of a new national government. 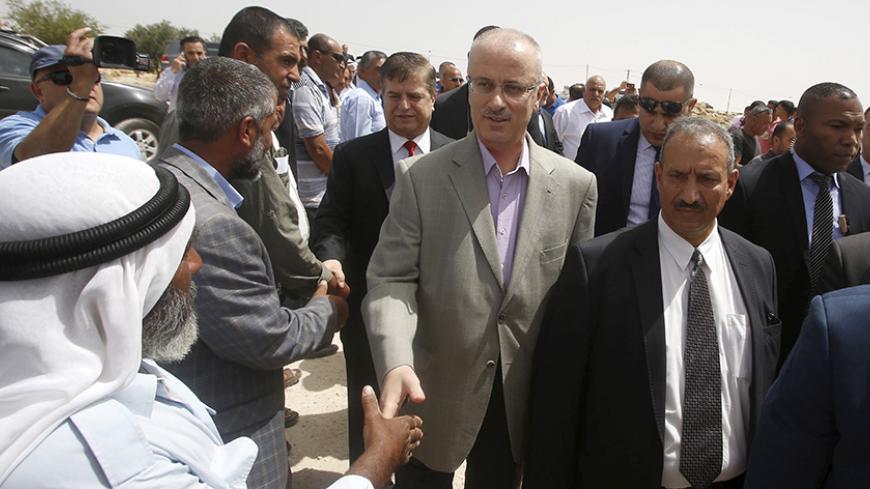 GAZA CITY, Gaza Strip — “Where there’s smoke there’s fire," as the saying goes, and this applies to the national consensus government led by Prime Minister Rami Hamdallah, following its denial of the leaked news about its possible resignation.

Bseiso added that the government is going through critical times. Several ministers are wearing more than one hat, and Economy Minister Mohammed Mustafa turned in his resignation in March. This increases the number of basic tasks assigned to the caretaker government — namely, putting an end to the effects of the political divide and preparing for the legislative and presidential elections.

“Six months into the formation of the government, some of the greatest challenges hindered its work, namely the Israeli aggression on the Gaza Strip. Therefore, the government had to focus on reconstruction and supporting the people of the Gaza Strip,” Bseiso added.

He said it was difficult for the government to ignore the thousands of families who lost their homes and make time to prepare for elections. Every time Hamdallah would meet with Abbas, these problems, along with the importance of a Cabinet reshuffle, would be brought up.

The comprehensive aggression of the Israeli forces on the Gaza Strip last July 8 lasted for 51 days and caused massive destruction that affected infrastructure in Gaza and left disastrous effects on most of the sectors that are vital to the lives of the population.

“According to the law, a Cabinet reshuffle should only include [the reshuffle of] five ministers," Bseiso told Al-Monitor. "However, the government needs a major reshuffle, which is why a resignation was considered to form a national unity government or an independent government.”

Ahmed al-Majdalani, PLO executive committee member and member of the committee tasked with consulting with the factions, said in an exclusive interview with Al-Monitor that PLO executive committee members met June 24 with the Palestinian factions. “It's hard to reach results at the moment, but we know in principle the positions of the Islamic Jihad and the Popular Front [for the Liberation of Palestine], and they both refuse to join the [current] government or any other Palestinian government, but they both back the move to form a national unity government,” he added.

It is worth noting that statements by Hamas leaders refusing PLO intervention in setting up the new government had been made. “Hamas leader Mousa Abu Marzouk has been contacted and he promised to send, in writing, the movement's position on the government to be formed. We consider his response a positive step, but it is not sufficient to start consultations on the national government program,” he added.

Majdalani stressed that the issue affords no procrastination and needs serious, intense and mature consultations.

For his part, Hamas spokesman Sami Abu Zuhri described the situation as “a mess.” He told Al-Monitor that the Fatah movement is making a mess by conveying its positions through the PLO executive committee, and that Hamas rejects this committee because it is not representative of all factions. He said the decision on the national government should come from the "PLO leading framework."

By leading framework, Abu Zuhri meant the committee on activating and developing the PLO, which was formed according to the Cairo Declaration of 2005 by the President of the Palestinian National Council Salim Zanoun, members of the PLO executive committee and the secretaries-general of all Palestinian factions, including the Islamic Jihad and Hamas.

Majdalani told Al-Monitor that there is no such thing as a temporary leading framework, but a so-called Palestinian committee on activating and developing the PLO. He denied that this serves as a parallel or substitute framework for the PLO executive committee, and added, “This is not the first time that the PLO executive committee interferes in the formation of the Palestinian government, and it won’t be the last.”

He added, “The current consensus government failed to make any achievements and did not get legitimacy from the Legislative Council. It failed to perform its duties and exercised discrimination and marginalization against Gaza; it is the worst government the Palestinian people have ever known.”

Abu Zuhri confirmed that PLO executive committee member Azzam al-Ahmad had been in contact several times with Abu Marzouq, who was informed that “[Hamas] does not want a government that caters to Fatah’s convenience and political agenda, but a government that [is representative of] all factions and which is formed based on consultations.”

Majdalani rebutted Abu Zuhri’s statement that the current consensus government has failed, and stated, “It is Hamas that foiled the national reconciliation government as it prevented it from performing its functions in the Gaza Strip and established a parallel shadow government led by Ziad al-Thatha.”

He explained that the national consensus government's resignation is out of the question unless an agreement to form a national government is reached, and added, “Otherwise constitutional vacuum will prevail.”

Political analyst Akram Atallah, a writer for Al-Ayyam newspaper, was not optimistic and said that the crisis will continue to expand between the Palestinian factions, and no government will be formed in the near future.

Forming a government requires responding to the Hamas movement's requirements, which consist of changing the prime minister, disregarding the Quartet's conditions and disbursing the previous Gaza government employees' salaries. However, meeting these requirements seems to be somehow impossible, for the time being at least.