Is Hamas prepping for a 'State of Gaza'?

Hamas’ announcement of the formation of an administrative committee to manage Gaza's governmental affairs has some wondering if it is paving the way for dissociating Gaza from the West Bank. 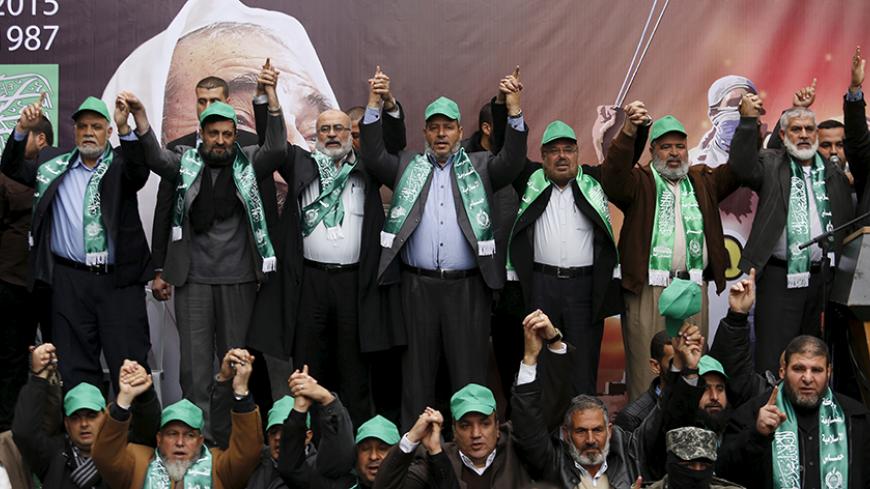 While Hamas continues to accuse the consensus government in Ramallah of failing to fulfill its responsibilities toward Gaza, the Palestinian Authority (PA) maintains its position that Hamas is impeding it from performing its duties in the enclave. Amid still-tense relations, news leaked on March 10 of Hamas forming an administrative committee to manage Gaza. Five days later, on March 16, Hamas members of the Palestinian Legislative Council (PLC) in Gaza officially announced the formation of a committee to manage government institutions there. Headed by Abdel Salam Siam, former secretary-general of Hamas' Council of Ministers in Gaza, the committee consists of seven officials, each assigned to oversee the work of a ministry and in some cases additional institutions.

Salah al-Bardawil, a member of Hamas’ political bureau, told Al-Monitor, “Hamas has not formed a substitute government to replace the consensus government. A governmental administrative committee was formed, not an actual government. [The committee] aims to organize the work of state institutions, and any minister from Ramallah is welcome to come to Gaza and do his job, and the committee will be at his service.”

Considering that the committee was formed without consulting the PA and therefore technically does not fall under its jurisdiction, Bardawil is perhaps trying to reassure the PA that the committee members are ready to assist PA ministers in the consensus government.

Ahmed Majdalani, secretary-general of the Palestinian Popular Struggle Front and a member of the PLO’s Executive Committee, told Al-Monitor, “Forming an administrative committee to manage Gaza is a political decision made by Hamas’ new leadership that was elected in February. Through this committee, some Hamas PLC blocs aim to provide legal cover to the work of the Hamas-affiliated de facto government that has been exercising the powers of the consensus government. This also shows that Hamas has abandoned the 2014 Beach refugee camp agreement for reconciliation between Fatah and Hamas as well as demonstrates how the Hamas government has turned division into separation in preparation for engaging in regional projects regarding the State of Gaza.”

Without further elaborating, Majdalani added, “The party behind the decision to form a committee must bear the consequences from the PA.”

Walid Awad, a member of the political bureau of the Palestinian People’s Party, expressed a position somewhat similar to Majdalani's, claiming in a March 18 article for Amad that the formation of the Gaza committee shelves the possibility of reconciliation, making Gaza a separate entity from the rest of the Palestinian territories.

Palestinian President Mahmoud Abbas told a gathering of public sector employees March 12 that he would not allow Gaza to be separated from the West Bank, asserting that there can be no Palestinian state without Gaza or a State of Gaza. A Palestinian minister close to Abbas told Al-Monitor on condition of anonymity, “The PA must reconsider the way it is treating Hamas following the formation of the governmental committee, which is in fact a new government in Gaza, although Hamas refuses to call it such.”

Yahya Moussa, a Hamas PLC representative and head of the PLC’s Oversight Committee, told Al-Monitor, “The members of the administrative committee are not ministers, nor is the committee a substitute for the government of consensus.”

He further stated, “The committee was formed as a temporary [solution] to coordinate between ministries in Gaza and fill in the gap resulting from the consensus government’s failure to fulfill its duties. The committee is tasked with unifying the Gaza Strip and the West Bank at the administrative, financial and political levels. As soon as the consensus government delivers on its duties in Gaza, we will no longer need this committee, although we take Ramallah’s threats against Gaza, following the committee’s formation, very seriously.”

By “threats,” Moussa was referring to statements by Majdalani and Azzam al-Ahmad, a member of Fatah’s Central Committee, who on March 21 pledged to take practical steps to confront the Hamas committee, though without going into details.

A senior government official in Gaza told Al-Monitor on condition of anonymity, “[I] contacted the presidency and the premiership in Ramallah as soon as the committee was established to inform them of its nature and to stress that it does not represent a substitute to the consensus government.” He added that he had hoped that Ramallah would understand the committee’s limited role without assuming more than was intended. Ramallah allegedly did not express a clear stance during the call.

The Palestinian Center for Human Rights in Gaza issued a statement March 13 warning that moves like the one taken by Hamas promote the idea of dissociating Gaza from the West Bank. In a similar vein, Mukhtar Abu Saada, a political science professor at Al-Azhar University in Gaza, told Al-Monitor, “Hamas’ move lacks a legal, constitutional dimension, but at the same time, the consensus government is not fulfilling its obligations toward Gaza. I may not agree with those who believe the committee will deepen the Palestinian division, but I am afraid the announcement of this committee could find an echo in some regional or Israeli proposals to establish a State of Gaza.”

Hamas may believe that the new committee will address the governmental work left undone by the failure to provide for Gazans’ needs under the consensus government. No one can predict, however, at this point how the PA might act to punish Hamas. For instance, it could impose additional taxes on the fuel needed to operate Gaza's power plant, exacerbating the electricity crisis and further angering the Palestinian street with the aim of forcing Hamas to back away from the committee's formation.