Tensions are continuing to worsen within Palestine’s consensus government over the issue of the Gaza employees, who still have not been paid. 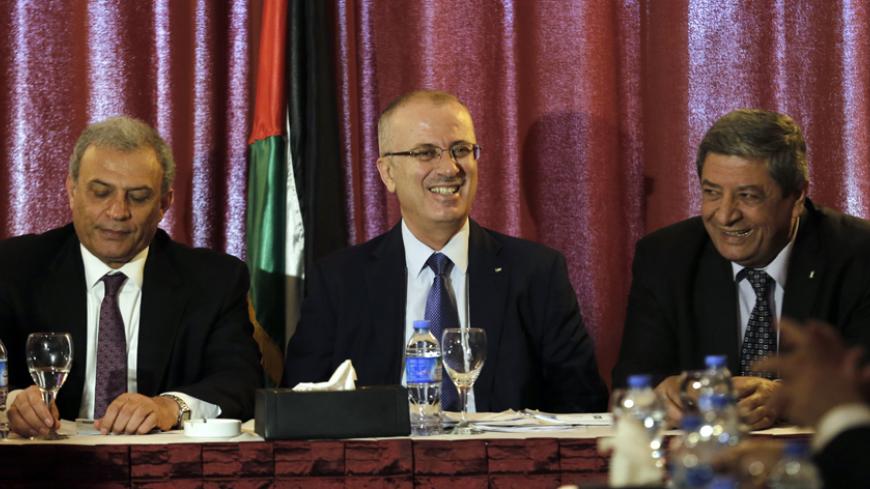 The source added that the delegation — made up of 11 members, including ministers and undersecretaries — felt they were locked up in the ArcMed Al-Mashtal Hotel, where they stayed in Gaza.

The source told Al-Monitor, “The security men forbade the delegation members from receiving visitors, and they would ask visitors at the hotel entrance if they were abstaining employees. They impeded the work of different committees in each ministry and the meeting with employees who were appointed before June 2007.”

An "abstaining employee" is one who was appointed by the Palestinian Authority before Hamas took over the Gaza Strip by force in June 2007 and did not return to work based on political convictions. Hamas appointed 40,000 workers to replace missing staff.

A member of the political bureau of the Popular Front for the Liberation of Palestine (PFLP), Jamil Mizher, told Al-Monitor that the security men at the hotel entrance forbade him from entering on April 20, although he clarified that he was there to attend the meeting of Palestinian factions. They responded that they had not received orders from Hamas to allow him in. This angered him, and they ultimately let him enter.

Local media outlets described the incident as a low point in the reconciliation efforts, after the government’s delegation cut short its planned five-day visit to Gaza that started on April 19.

Ihab Bseiso, a spokesperson for the consensus government and member of the delegation, said, “As a consensus government, we should maintain our national stance without taking part in political disputes. We came to the Gaza Strip with a certain mission, but things were on the verge of getting out of control. So we chose to leave.”

He told Al-Monitor that the visit was the result of a Cabinet decision to conduct an employee census and registration. The registration of employees who were employed before 2007 was to start April 20 and end May 7. Each ministry’s subcommittee would give its recommendation to the Supreme Supervisory Committee, which would itself integrate the employees appointed by the previous government into the ministries.

Calls were made to the national and Islamic forces to contain the crisis, and both Islamic Jihad and the PFLP arrived at the scene.

“We convened with the two parties on April 20 at 5 p.m. to contain the crisis. Upon the arrival of Ziad al-Thatha, a member of Hamas’ political bureau; Ghazi Hamad, a leader in Hamas; and Hamas spokesperson Sami Abu Zuhri the discussion started,” Mizher said. “But each party defended its stance.”

He noted that Hamas insisted on being part of the Supreme Supervisory Committee and on implementing understandings referenced by Deputy Prime Minister Ziad Abu Amr, while the consensus government insisted that these ideas were just suggestions. According to Hamas’ website, the understanding discussed between Hamas and Abu Amr included the formation of a consensual technical, administrative and legal committee to study the staff dossier within three months, begin to integrate the staff hired by the movement in the ministries and pay them an advance until the committee completes its work.

Mizher noted that the PFLP suggested during the meeting that the government continue to conduct the census on the employees, provided that the Supreme Supervisory Committee be formed when Prime Minister Rami Hamdallah comes to Gaza. But before Gaza answered the proposition, the government delegation withdrew, claiming that it was notified by Hamdallah to leave Gaza immediately.

Abu Zuhri told Al-Monitor during an interview on the sidelines of a workshop organized by the PFLP on April 21 that to save the reconciliation, “the government delegation stayed at the hotel, and the ministers refused to head to their ministries. They called the abstaining employees to head to the hotel, but [the consensus government members'] behavior was discriminatory.”

Abu Zuhri denied news about house arrest of ministers or inappropriate behavior by security services. He said, “Security is based on protecting ministers, and Hamas is concerned with the government’s success and the latter’s return is welcome.”

Bseiso said, “Our visit was not discriminatory at all. We met with everyone, including Hamas members. We adopted a professional approach, and we did not come here on behalf of any faction, but to solve the employees’ problem and provide compensation for employees who were appointed after 2007. All these are practical measures that would require three months and that aim to solve the Gaza Strip crises.”

Bseiso asserted that the members of the Supreme Supervisory Committee will include governmental figures approved by Hamas upon its establishment. The formation of the committee is still pending the resolution of disagreements with Hamas. He added, “Amr’s proposals were just that, and not understandings. But we won’t disagree on the wording. What is important now is to solve the inhabitants’ issues and give people hope. Our efforts will persist.”

Political analyst Akram Atallah called the delegation’s departure to Al-Monitor a natural result in line with the events preceding this eruption. The meetings had not been seriously planned, said Atallah, describing Hamas’ stance toward the national consensus government as "sharp," as it led to the departure of the delegation. He added that the dispute runs deeper, raging between two different political parties with different national programs.

“Some parties want the crisis in the Gaza Strip to persist, and any change would incur losses for them. The solution is either a real dialogue within a set timeframe or elections,” he said.

Khaled al-Batsh, a member of the political office of Islamic Jihad, told Al-Monitor, “We met with the delegation and with Hamas to contain the crisis, but we failed. After the delegation left, we contacted the prime minister, who asserted that he would visit the week after, and all efforts will be invested in solving the dispute that erupted against the backdrop of employee registration.”