The Palestinian government says that Hamas is delaying the handover of the Gaza crossings, while Hamas insists on a partnership to manage the transition. 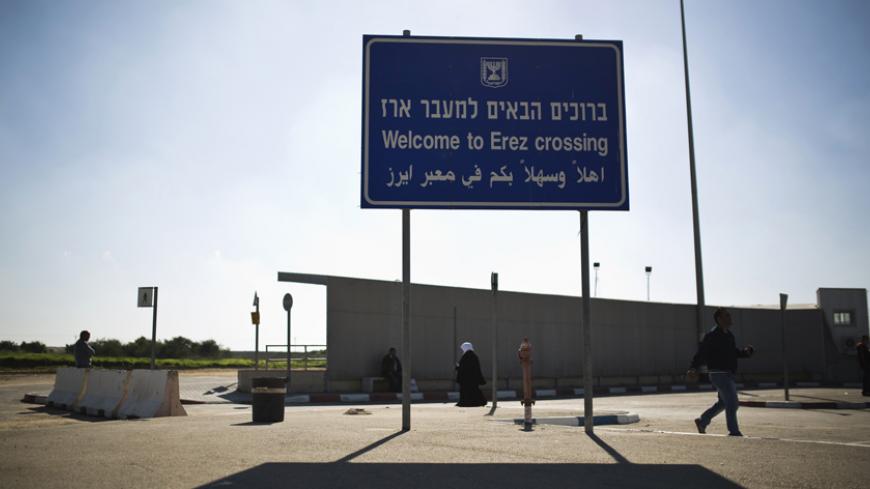 A sign is seen at the Erez border crossing between Israel and northern Gaza Strip in this photo taken Dec. 28, 2014. - REUTERS/Amir Cohen

GAZA CITY, Gaza Strip — The frequency of conflicting statements has increased between the Palestinian government and Hamas on control of the three crossings separating the Gaza Strip, Israel and Egypt. Each of the parties has accused the other of delaying the handover, one of the most important conditions for the unity government to take control of the besieged Gaza Strip, allow the entry of reconstruction materials and reopen the Rafah border crossing.

While Hamas has accused the Palestinian Authority (PA), led by Prime Minister Rami Hamdallah, of evading its responsibilities toward Gaza, the government responded that Hamas, which had controlled Gaza for seven years, refuses to hand over control of the crossings, asking for “a partnership.”

Hamdallah called on Hamas to hand over the crossings on Jan. 3, saying, “All parties in Gaza need to empower the consensus government and hand over control of the crossings.” This statement came after the government formed a committee to take over the crossings, headed by Minister of Civil Affairs Hussein al-Sheikh. The committee also includes Nazmi Muhanna, the director-general of the PA's general administration of border crossings, and Deputy Minister of Civil Affairs Nasser al-Sarraj.

Hamas spokesman Sami Abu Zuhri retorted in a Jan. 4 media statement, “The Islamic resistance movement, Hamas, considers Hamdallah’s call to hand over control of the crossings as a pretext to evade his responsibilities, since there are no employees of the previous government at the border crossings with Israel. The movement calls on him to halt the policy of discrimination and neglect against the Gaza Strip.”

There are seven border crossings in the Gaza Strip. Six are with Israel, and four of them were closed several years ago. Individuals are allowed to enter and exit Gaza through the Beit Hanoun (Erez) crossing in northern Gaza, while the Karam Abu Salem (Kerem Shalom) crossing in southern Gaza is used for the transport of goods. The Rafah border crossing is the only one between Gaza and Egypt.

Muhanna said the government was ready to take control of the three crossings in the Gaza Strip, but Hamas was obstructing the handover process.

In a phone interview with Al-Monitor, he said, “We are governed by agreements with Israel and Egypt, and the crossings need to be handed over clear of any workers. We have our trained staff from the Gaza Strip and they are ready to take control of them.”

He said, “The crossings are affiliated with the governments and are not controlled by organizations. I cannot work with the current staff, and the crossings need to be handed over unconditionally.”

Maher Abu Sabha, the Hamas-appointed director of the border crossings in Gaza, attributed the delay in the handover to the absence of a political decision by the government to control them.

“So far, there is no political decision for the Hamdallah government to exercise its functions in the Gaza Strip. This is due to a disagreement between the government poles in Ramallah over who will take control of the crossings and over the handover mechanisms, since there are many power centers,” he told Al-Monitor.

Under Hamas rule in Gaza, the PA was and is still assuming responsibility for coordinating with the Israeli side regarding the Erez crossing for the movement of people, and the Kerem Shalom crossing for the transport of goods. All the while, the Hamas-run crossings administration decides who and what enters and exits the crossings.

The crossings administration, which was appointed by the previous Hamas government, has total control over the Rafah border crossing between the Gaza Strip and Egypt, in the absence of the PA. The Egyptian government completely closed the crossing after the Karam al-Kawadis attack in the Sinai Peninsula in November 2014, and requires that the Palestinian government exert control over it and security be restored in Sinai for it to be reopened.

Hamas leader Ismail Haniyeh's media adviser Taher al-Nunu said that the movement agreed with Deputy Prime Minister Ziad Abu Amr to hand over the control of the crossing “based on a partnership, not an exclusion,” with which the government did not comply.

“The government needs to assume its functions at the crossings. Afterward, it will be free to transfer or change the staff working there, since we are not an occupation [force] that has to completely withdraw from the crossings,” he told Al-Monitor.

“Gaza’s security apparatus is responsible for the security situation, in accordance with the reconciliation agreement. Therefore, the deployment of security forces on the border is natural, while their absence allows chaos and anarchy, which the government and we do not want,” Nunu added.

Nevertheless, a Hamas source who spoke to Al-Monitor on condition of anonymity said that handing over control of the crossings depends on treatment of the former Gaza government employees as legitimate ones in the Palestinian government, and paying Gaza’s ministries operational expenses from the government budget.

The Gaza Ministry of Finance is still collecting taxes on goods entering the Gaza Strip via the Kerem Shalom crossing, and a part of that revenue covers the operational expenses of the official institutions and the security staff's salaries, which are not covered by the Qatari grant to pay the civil servants' salaries.

The source added, “At present, we cannot send the crossings’ employees home. Their affairs need to be settled first, and we cannot withhold Gaza’s ministries' operational budgets. This would mean that they will completely stop working, which would harm the interests of Gaza’s citizens.” He explained, “During our meeting with the government, we did not sense any seriousness to take control of the crossings, particularly the Rafah crossing. Pressure is being exerted to reopen it, and the issue is linked to political and security issues in Egypt, and not simply to the government’s control of it.”

Lost in the midst of the continued political bickering between Hamas and Fatah, which seem to prioritize party interests, are the Palestinian people, and more specifically, the Gazans who cry in vain for assistance from a political elite that is deaf to their pleas.