Will Fatah and Hamas ever find common ground?

Recent reshufflings of ministerial positions by Hamas in Gaza and President Mahmoud Abbas in Ramallah threaten to widen the already deep rift between Hamas and Fatah. 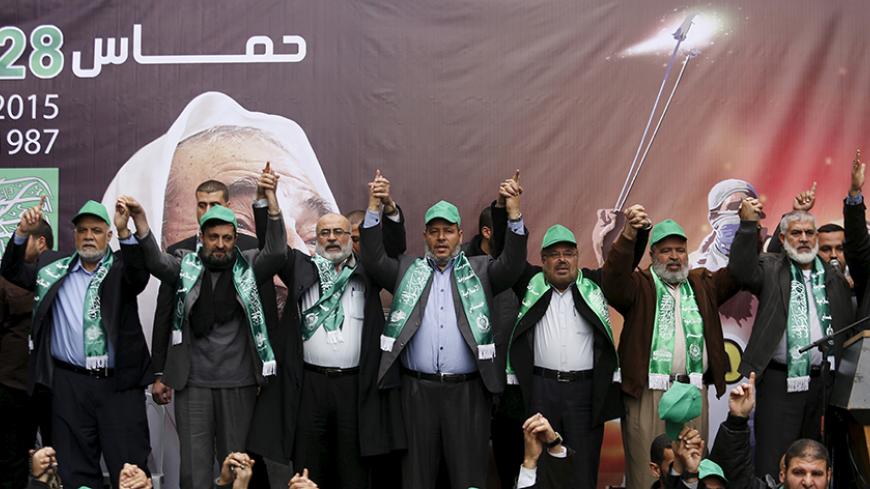 GAZA CITY, Gaza Strip — A recent shuffle of positions at the Ministry of Interior in Gaza has shone a spotlight on the ongoing split between the West Bank and Gaza and the floundering effort at Palestinian reconciliation.

Ministry of Interior spokesperson Iyad al-Bazm confirmed to Al-Monitor, “The Hamas leadership appointed on Dec. 12 the released detainee Toufic Abu Naim as leader of the internal security forces, which include the internal security apparatus and the police. Abu Naim succeeds Salah Abu Sharkh, who was appointed undersecretary of the Ministry of Transportation in Gaza. Abu Naim reportedly spent 22 years in Israeli prisons and was released as part of the Gilad Shalit prisoner exchange deal on Oct. 11, 2011.”

Defending the shuffle, Hamas leader and parliamentarian Salem Salama told Al-Monitor, “This is a change in jobs and administrative positions that ministries and security apparatuses usually make. This is a legal and correct measure that provides diversified experience and encourages passing it on.”

Salama further stated, “Hamas does not function outside the legal framework. It has the right to do whatever serves the public interest, including changes and reshuffling. The consensus government has relinquished its responsibilities toward the Gaza Strip and has refused to deal with the ministries or acknowledge the employees appointed after the division and Hamas’ control of Gaza, [which it took over] in 2007. In light of this, the steps that Hamas, which won the 2006 parliamentary elections, is taking are legal and convenient for controlling the situation and making life functional in Gaza.

“President Mahmoud Abbas and Prime Minister Rami Hamdallah made ministerial changes in the consensus government on July 30, 2015, without agreeing with Hamas as stipulated in the Mecca agreement from Saudi Arabia, sponsored by the kingdom, and the Beach refugee camp agreement in Gaza, as they are an integral part of the reconciliation.”

A Fatah leader in Gaza speaking on condition of anonymity disagreed with Salama, telling Al-Monitor, “The changes and reshuffling of positions that Hamas is adopting in the government and the security apparatus violate the law and foil the agreements between Fatah and Hamas in Mecca and the Beach refugee camp. These changes also destroy the reconciliation efforts, since they have not been made in a national consensus framework.”

He further stated, “Hamas is acting single-handedly in Gaza, and it is crippling the efforts of the consensus government.” He also charged, “Hamas is not allowing this government to resume its work in the Gaza Strip, which Hamas is coercively controlling.”

Naji Sharab, a political analyst and teacher of history and political science at Al-Azhar University in Gaza, told Al-Monitor, “The issue is not about the legal framework and who changed it. It is about a political division and dispute that are deepening day in and day out, due to the individual actions of each party in the absence of a consensus that settles the political debate and conflict.

“Hamas’ administrative measures and reshuffling of ministerial positions in the Gaza Strip totally contradict the spirit of reconciliation. It is as though Hamas does not acknowledge the consensus government and is acting as a de facto authority in Gaza. The two parties [Fatah and Hamas] need to explore a broader initiative to end the division and the lack of trust, in the framework of achieving consensus and looking out for public interest, without focusing on factional and partisan interests.”

Hamas had announced another shuffle July 22 involving leadership of the security apparatus at the Ministry of Interior. It appointed Mohammed Abdul Latif Khalaf deputy police chief, while Abu Obeida al-Jarrah took over as chief of staff at the ministry. Naim al-Ghoul was made chief of the National Security Forces, and Mohammad Azzam as head of the Crossings’ Committee.

Gen. Adnan al-Damiri, official spokesman for the Palestinian Authority (PA) security forces, told Al-Monitor from Ramallah, “Hamas is a political organization that does not have the legitimacy to reshuffle positions in the security apparatus. The 2005 Security Service Law no. 8 on the Palestinian security forces states that the supreme leadership of the armed forces — President Abbas and PM Hamdallah, the latter in his capacity as minister of interior — has the right to grant promotions for higher ranks within the security apparatus and the police.

“Hamas’ appointment of new leaders in the security apparatus in Gaza is a step aimed at widening the division. It does not help the reconciliation and national unity. It rather entrenches a complete rift in Gaza. What Hamas has done in Gaza is null and illegal. The consensus government does not acknowledge these promotions and changes because they do not comply with the law or legitimacy, and Hamas must cancel them and abide by the decisions of Abbas and the consensus government.”

Abdul Rahman Abu Nasser, a general law professor at Al-Azhar University in Gaza, said, “The reshuffling in the ministries and security apparatus in Gaza is illegal. The proceedings are null and void because such changes in positions must not be done without referring with the consensus government and getting official approval, according to the 2005 Security Service Law no. 8 on the Palestinian security forces. Hamas should have left the positions as they were.”

Amid the exchange of accusations between Fatah and Hamas, on Dec. 15 Abbas made new ministerial appointments of his own in the PA government, appointing Ihab Bseiso as minister of culture, Ibrahim Shaer as minister of social affairs and Mahmoud Abu Diyak as minister of justice. The Palestinian Basic Law allows him to single-handedly shuffle positions as long as the process does not include more than one-third of all ministers.

In the wake of Abbas’ appointments, Hamas spokesman Sami Abu Zuhri charged in a press statement that the reshuffle had turned the government into a unilateral administration; such a step widens the rift and ignores the national agreements. Zuhri said that statements from Ramallah claiming that the ministerial changes would help end the rift were “simplistic” and “do not serve the Palestinian reconciliation.”