The Interior Ministry in Gaza recently announced the appointment of a new chief of intelligence and chief of staff, although some argue there is no precedent or statutory basis for such positions in the ministry. 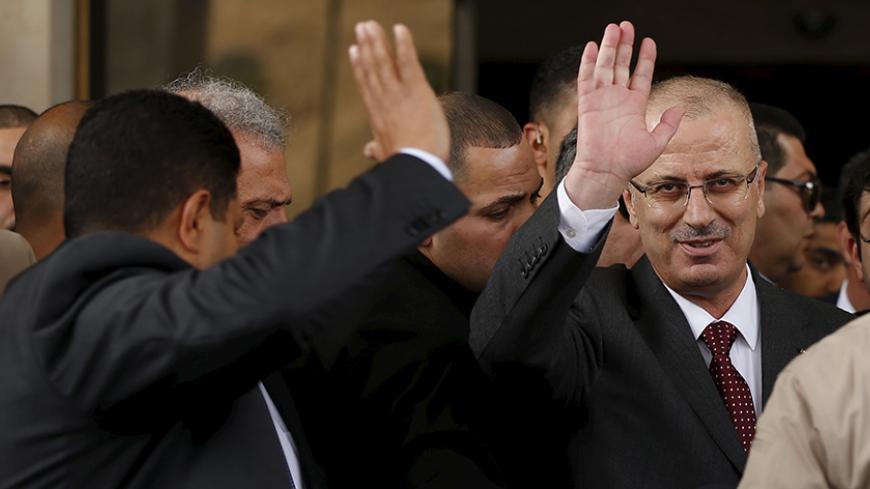 The Interior Ministry in the Gaza Strip announced a series of promotions, transfers and new appointments Aug. 4, including a new chief of intelligence and chief of staff. Deputy Interior Minister Kamel Abu Madi said that all the personnel changes fall within the normal framework of rotating positions and do not involve the creation of new posts. Others, however, disagree, arguing that there is no precedent or legal basis in Palestinian governance for a chief of intelligence assigned to the Interior Ministry in Gaza.

Abu Madi told Al-Monitor that the appointments were made without coordination with the interior minister and prime minister of the government of national consensus, Rami Hamdallah. "Since the announcement of the [consensus] government on June 1, 2014, communication between the prime minister and us has been severed,” he said. Responding to criticism concerning the legal basis for the changes at the ministry, he said, “To those who are speaking in legal terms, I ask them: How could the minister of interior leave his ministry without any budget or any contact? Before we are questioned about the legality of our work, we need to ask the minister about his legal work.”

Islam Shahwan, a researcher specializing in security and a former spokesman for Gaza’s Interior Ministry, does not believe that introducing new positions to the existing governing system is legally legitimate. He claimed, however, that the positions to which new people were appointed by the Interior Ministry had previously existed within the Palestinian security forces structure.

Shahwan told Al-Monitor, “The intelligence apparatus is not something new. After the Palestinian division in 2007 [when Hamas seized control of Gaza from Fatah], many of those working in the security services, including intelligence, vacated their positions, leaving the institution almost empty. However, about a year and a half ago, the security apparatus in the Gaza Strip was reactivated and some experienced individuals joined it, as well as some of the members of the old staff. An unknown figure [whose name was not publicly announced] was put in charge of running the security apparatus until the administrative and structural situation is restored in order to appoint a chief.”

He also said that the security forces apparatus had included a chief of staff position, but that it had been vacant for years. “As part of the [recent] transfers, the Interior Ministry wanted to activate the position of chief of staff in particular, as it is pertinent to Palestinian liberation issues. This way, [the ministry] can ensure harmony between the security apparatuses and the resistance in Gaza, coordinating their stances and efforts. Thus, a chief [of staff] was appointed,” Shahwan said.

Shahwan believes that these appointments stem from what he considers the unity government's failure to perform its duties in Gaza, especially in regard to security and the Interior Ministry. He said, “The [appointments] are a strong political message to the Fatah movement and the unity government implying that if they wish to cooperate, then [Gaza] has enough security officials ready to help. However, if [they] back off, the reform process of the security apparatuses will not stop, as has been recently evidenced with the activation of positions.”

Article 13 of the Law of Service in the Palestinian Security Forces no. 8 (2005) provides for forming a general intelligence apparatus affiliated with the Palestinian president, and which performs its functions under the leadership of a chief. According to article 14 of the same law, the chief is appointed by the Palestinian president. Al-Monitor, however, found no evidence of a statutory basis for a chief of staff posted to the Ministry of Interior.

Hossam al-Dajny, a writer and political analyst, pointed out that the Palestinian reconciliation has crumpled. In late July, the reconciliation government made several adjustments, adding some ministers, while removing others, thus breaching the 2014 Beach Refugee Camp Agreement on reconciliation between Fatah and Hamas. From Hamas' perspective, this represented a violation of the unity government consensus and a return to the pre-agreement status quo.

Before the announcement of the consensus government, Hamas had ruled Gaza through the government that the movement formed in mid-2007 after it took control of the territory. Meanwhile, Palestinian Authority President Mahmoud Abbas has formed several successive governments to oversee the West Bank without the benefit of new elections.

Dajny remarked, “These promotions could be meant as a political message by the Interior Ministry to the unity government, saying that things have returned to the situation prior to the Beach Refugee Camp Agreement. Hamas’ announcement that it would deal with the ministry was made so as not to sever all ties with the [unity] government. On the ground, however, the agreement has already been ruptured.”

He also told Al-Monitor that those charged with following up on the reconciliation are well aware that the security dossier falls outside the framework of the unity government agreement. “According to the Cairo Agreement of May 2009, a security committee should be formed by both sides [Fatah and Hamas] under Egyptian auspices. However, this requires a presidential decree from President Mahmoud Abbas. Thus, as per the agreements, the unity government and the Interior Ministry have no control over the security apparatuses, which the Palestinian public fails to fathom,” Dajny said. “In other words, amending the work of the security apparatuses is strictly linked to a decree that would form a supreme security committee in charge of restructuring the [security] agencies during the pre-election period. According to the committees’ decisions, after the [presidential] elections [stipulated in the reconciliation agreement], 3,000 soldiers would be sent to work in Gaza, and the security apparatuses would be restructured and integrated.”

Dajny believes that the Gaza Interior Ministry's personnel changes have political implications arising from the financial and administrative neglect of the unity government. He stated, “[The appointments] could suggest that the Hamas movement is forming an independent political entity in Gaza in preparation for the post-Abbas period. This falls into the national framework in coordination with some of the resistance factions, by establishing security institutions, espousing a doctrine that is different from that of the security services in the West Bank.”

Dajny further suggested that Hamas is perhaps trying to present itself as a movement with a professional security structure able to fill the void after Abbas leaves the scene and to offer a political alternative within state institutions that would be accepted by the European Union, the United States and the Palestinians.

Whether the new appointments at the Interior Ministry are within the normal framework of the ministry’s organization or are part of a Hamas effort to build a new political system, they will deepen the division with Fatah.