Fatah and Hamas are seeking to overcome the obstacles to reconciliation, namely the problems related to security services and Hamas-appointed employees. 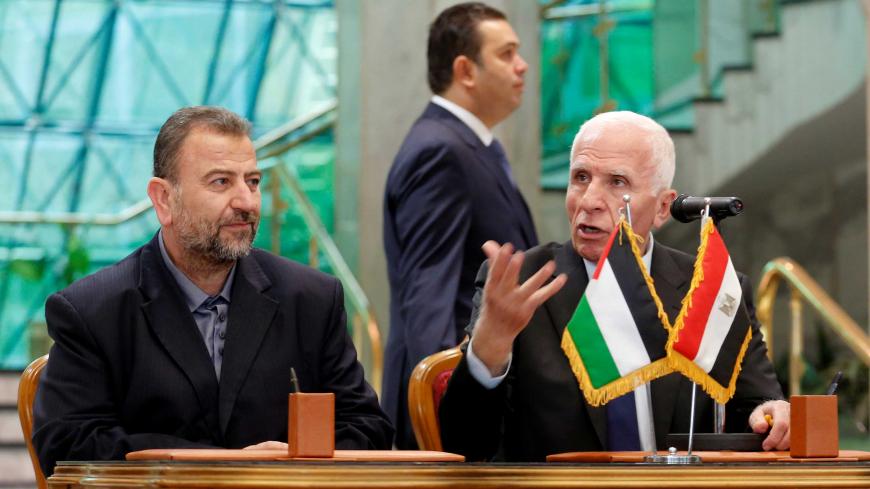 Although the Fatah-Hamas reconciliation agreement — signed Oct. 12 in Egypt — has rekindled hope, doubts remain as to whether the outstanding issues, such as the problems linked to the security services, can be overcome. There are Palestinian fears that failing to reach solutions to these issues will halt reconciliation.

Palestinian President Mahmoud Abbas repeatedly stated, most recently Oct. 24, that the reconciliation’s ultimate goal is to have the West Bank experiment implemented in the Gaza Strip, particularly the security experiment that is based on “a unified authority, unified law, unified arms, nonexistence of militias” and a unified policy for the security services.

Hussein al-Sheikh, a member of the Fatah Central Committee and civil affairs minister, stated Oct. 16 that jobs within the Gazan security services were opened and that Abbas is the one who decides whether or not to go to war or make peace, not the factions. He noted that the security forces’ unification is designed to protect the Palestinian political project.

Ibrahim Habib, the dean of scientific research at Ribat University College, which is affiliated with the Gaza Ministry of the Interior, told Al-Monitor, “The Gaza Strip and West Bank security services are expected to be merged together via a Fatah-Hamas security committee under the Egyptian umbrella. The committee would consider the agreed-upon mechanism, without pushing things to the point of having all of the Gaza security services’ employees replaced with their counterparts in the West Bank. An evaluation of the ranks of the Gaza high-ranking officers and an agreement on the administrative structure of the security services may take place after the merger. Nevertheless, the most important thing is to have a political vision governing the security establishment's work, which at the end of the day implements a political agenda.”

Gen. Adnan al-Damiri, the spokesman for the PA's security services, said Oct. 18 that a restructuring of the security forces is not linked to a particular political faction, and he noted that the PA is against partisan quotas in the Palestinian security forces.

Interior Ministry spokesman Iyad al-Bazm told Al-Monitor, “The ministry embarked on the preparations to implement the reconciliation [agreement] by either merging security and military staff or unifying the security establishment, while preserving the employees’ rights and forming a joint committee between Gaza and the West Bank to examine each of the files separately. The committee would submit its visions in February. The West Bank’s security commanders will pay a visit to the Gaza Strip soon and provide suggestions on the future of the security services, which we are ready to examine.”

When it comes to the thorny security dossier, Fatah and Hamas seem to be more inclined to avoid handling it at present, believing that it may undermine the reconciliation. Postponing the issue, however, will not be helpful, since it will have to be dealt with sooner or later. What they are avoiding are the answers to serious questions on the Interior Ministry’s security doctrine that will govern the security services in Gaza — namely the security coordination with Israel or the prosecution of those suspected of collaboration with Israel.

Islam Shahwan, a former spokesman for Gaza’s Ministry of Interior, told Al-Monitor, “Serious fears prevail over Gaza regarding the security dossier due to the many components it consists of. First is the likelihood that thousands of Gaza security services’ employees be dismissed. Second is the difficulty of merging the West Bank and Gaza Strip security services. In parallel to Gaza’s internal security services, there is the Palestinian Preventive Security in the West Bank, and there are two intelligence agencies in Gaza and the West Bank. Neither Hamas nor Fatah and the Egyptians have a clear merger mechanism or a clear mechanism to appoint the services’ commanders, assistants and deputies in administrative positions following the merger. Third is whether or not the unified Interior Ministry will recognize the dues to the security services’ employees who were appointed in 2007 — whether or not it will sent them to retirement based on a legal mechanism that is agreed upon, or whether or not it will dismiss them immediately and give them an end-of-service gratuity. Fourth is whether or not the Interior Ministry will commit to the ranks to which hundreds of the Gaza security officers were promoted.”

A Palestinian security official who declined to be named told Al-Monitor, “There was a last-minute rescue of the reconciliation agreement, following differences over security issues and the future of thousands of Gaza’s security employees. While Hamas insisted that they remain part of the Palestinian government cadre, Fatah refused. The latter agreed on merging 3,000 employees, which Hamas appointed before taking control over Gaza in mid-2007, and refused that the other 14,000 employees, who were appointed later on, be merged.”

Hani Masri, the director general of the Palestinian Center for Policy Research & Strategic Studies - Masarat in Ramallah, told Al-Monitor, “The task of the security services' commanders in the West Bank will be impossible to achieve unless through a partnership with their Gazan counterparts. This is because they need to confer with one another about the mechanisms and ways to rebuild the security services. The security services need to be rebuilt, restructured, merged, renewed and reformed based on professional and national criteria, away from any interference from political parties and political and security forces. This should happen according to a new security doctrine considering that Palestinians are seeking national independence by putting an end to the occupation, rather than the need to abide by the Oslo Accord's security commitments that Israel has already bypassed.”

The security dossier is perhaps the most serious obstacle to making reconciliation a success, with each party seeking to impose its views in the management of the security dossier, believing that this would necessarily imply its triumph. While the PA seeks that security coordination be implemented in the Gaza Strip, Hamas’ desire may be to use the doctrine of the security services that will be merged in favor of its political program, which is based on the armed resistance.