Hamas threatens vote of no confidence in Abbas

Hamas called and then postponed a Palestinian Legislative Council session to push for a vote of no confidence in the current consensus government. 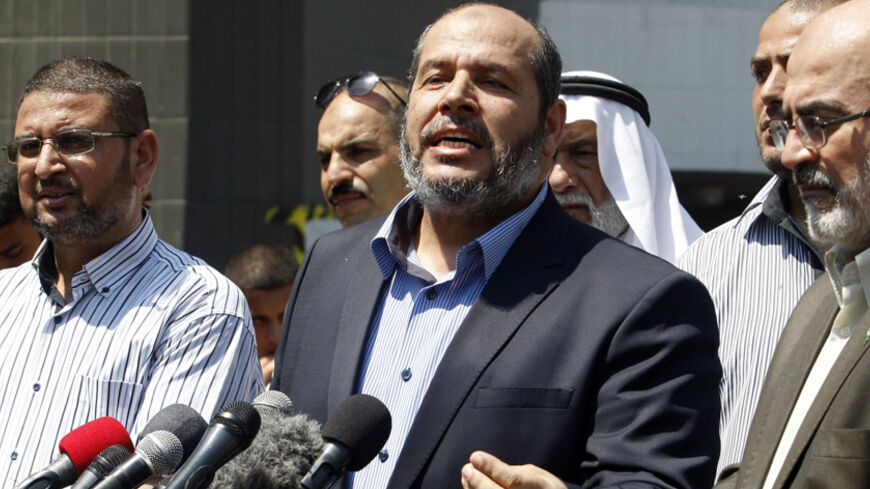 It has become clear that the worsening situation in the Gaza Strip after the Israeli war this summer has largely resulted from the failure of the reconstruction process, the ongoing closure of the crossings and the failure to settle the issue of the payment of employee salaries. This prompted Hamas’ parliamentary bloc to announce on Nov. 16 the holding of a Palestinian Legislative Council (PLC) session Nov. 19-20 to discuss the future of the consensus government. However, on Nov. 18, the deputy head of the PLC, Ahmed Bahar, announced in a news release that the session would be postponed to an unknown date, in response to good offices and to the Jerusalem events.

A senior Hamas leader told Al-Monitor on condition of anonymity, “The parliamentary Hamas bloc was serious about holding the session and potentially declaring the illegitimacy of the government, and thus take us into another predicament. This led Palestinian and Arab parties to contact us in a bid to heal the rift.”

“We understand the motives leading the members of parliament not to disrupt the government, and it is their right to put pressure on the executive branch to activate it. But our disagreement with Fatah is political par excellence, even if it took a legal form. I am aware of the intractable crisis resulting from the government’s reluctance, but one cannot solve a crisis by creating another, bigger one. Therefore, the session was postponed given that we have not reached the point of no return with Fatah and the president,” the Hamas leader added.

Mohammed al-Ghoul, head of the Hamas-affiliated Change and Reform bloc, told Al-Monitor, “The government failed to carry out its duties and functions, and rather worked to entrench the divide between Gaza and the West Bank. It divided the employees, and was sectarian in addressing the current situation. It no longer has a role on the ground. Moreover, it is illegal as it has yet to get the vote of confidence of the parliament, knowing that it was formed five months ago.”

In an interview on Nov. 13, Khalil al-Hayya, member of Hamas’ political bureau and former president of the movement’s parliamentary bloc, accused President Mahmoud Abbas and Fatah of deliberately hampering the government to prevent it from exercising its work in Gaza, as it has become weak. He threatened to withdraw the confidence through the PLC or through factional understandings, if the government refuses to respond to accountability.

For his part, head of Hamas’ political bureau Khaled Meshaal was less critical of the government. He said in an interview on Nov. 9 that the government’s performance was tainted by slowness in carrying some of its duties. He asked it to be integrally and equally responsible in the West Bank and Gaza.

Fatah member of parliament Najat Abu Bakr said in an interview with Al-Monitor, “[I am] not satisfied with the performance of the government, given its failure to start reconstruction in Gaza. But the holding of a PLC session in Gaza entrenches the split, as no PLC meeting can be held without the consent of President Abbas.”

Meanwhile, Fatah spokesman Ahmed Assaf, in a radio interview on Nov. 18, rejected Hamas’ calls for the dissolution of the government under the pretext of not carrying out its functions, because the government was doing its job to the fullest. Assaf accused Hamas of hampering the government’s work, by maintaining its security control over the Gaza Strip through its armed groups.

Minister of Labor in the consensus government Maamoun Abu Shahla revealed in a statement issued on Nov. 20 that a Cabinet reshuffle is in the offing, while all parties are currently talking about the extension of the government’s work as a result of the recent war. He considered that the changes in the Palestinian, Arab and international positions indicate that the life of the current government will be extended.

A senior official in the office of Abbas told Al-Monitor on condition of anonymity, “Hamas’ expected step to withdraw the confidence from the government is illegal, as it is an interim one and did not originally get the parliament’s vote of confidence to have it withdrawn. Moreover, when Hamas signed the reconciliation agreement and accepted the government formation, it knew full well that there was no agreement to put this government to vote.” The official wondes whether “Hamas is trying to rework the reconciliation agreement on one side.”

However, the PLC session that Hamas called for and then postponed was not going to be limited to the future of the government and the withdrawal of confidence. But it would have caused a major explosion on the Palestinian scene, since it would have discussed the legitimacy of Abbas, according to what Al-Monitor learned from some Hamas members of parliament.

In an interview with Al-Monitor, Yahya Moussa, Hamas leader and chairman of the Oversight Committee in the PLC, said, “Abbas is disrupting reconciliation. He has to leave because he is the fundamental problem obstructing the Palestinian national project, and the PLC is disrupted based on his own decision. Therefore, he will not convene the council for a meeting after he kidnapped the government and gave an unprecedented example about power monopoly. It has become a national imperative that Abbas be absent from the Palestinian political arena in a consensual manner after the end of his mandate.”

Atef Adwan, former minister of refugee affairs and a Hamas member of parliament, called in a written statement on Nov. 7 for the immediate resignation of Prime Minister Rami Hamdallah, as he is incapable of achieving the Palestinian goals. He also called on him to stay at the service of Abbas, who differentiates between his people, between a Gaza citizen who has all the rights and a Gaza citizen deprived of everything.

These developments prompted Fatah’s parliamentary bloc to issue on Nov. 17 a statement saying that the Hamas members of parliament are part of the state of division and are working to prolong it, while disregarding their responsibilities and duties as members of parliament. The statement accused Hamas of continuing to carry out divisive practices and putting obstacles in front of the government, because it does not want to end the division but rather manage it until further notice.

It is clear that the political leadership of Hamas has intervened at the last minute to defuse the political confrontation that was about to plague the Palestinians and drive the fragile reconciliation down the drain. Meanwhile, there are no guarantees that its intervention will succeed in the future, in the event that the crisis continues to plague the Gaza Strip.