Hamas wants to extend unity government but with conditions

Hamas wants changes for the unity government as its six-month term has come to an end, criticizing President Mahmoud Abbas for failing to address Gaza’s woes. 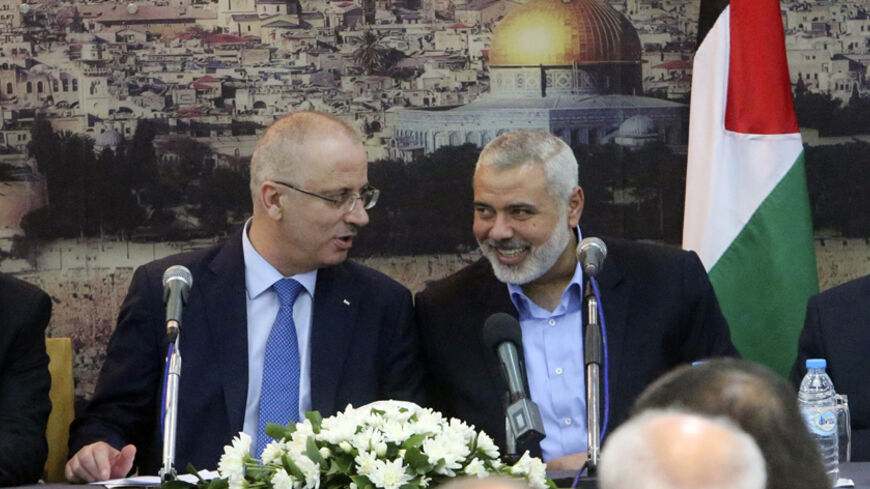 The legal term of the consensus government, which was set at six months in light of the Palestinian reconciliation, ended on Dec. 2. However, Hamas leader Salah Bardawil asserted on Dec. 3 that he was ready to extend the government’s work for an additional six months.

In an interview with Al-Monitor, Ahmad Bahr, the acting speaker of the Palestinian Legislative Council, called on Fatah and Hamas to “re-establish the government, as the one already in place has not carried out any of the tasks delegated to it, especially in the Gaza Strip.”

Mahmoud al-Zahar, a member of Hamas’ political bureau, asserted on Nov. 30 that any alternatives for the government should be agreed upon with the factions and that the end of its set term does not mean that the government is gone. It will stand its ground until other alternatives are discussed. The term was never the issue, but rather the government’s slackening in doing its job.

Faisal Abu Shahla, a member of Fatah’s Revolutionary Council, told Al-Monitor, “The reconciliation does not stipulate a specific date that ends the government’s work, but rather sets forth the formation of a consensus government to prepare for the legislative and presidential elections and the national council elections, without mentioning its end date. Hamas’ talk about a specific timeframe is not accurate.”

A prominent Hamas official told Al-Monitor on condition of anonymity, “The [Hamas] movement carried out in the past few weeks a series of intensified deliberations inside and outside Gaza to discuss a way to solve the current stalemate. The legal term of the government has ended, but it cannot be replaced due to the lack of suitable alternatives for the Palestinian situation, which is moving from one crisis to another.”

“I put forward several alternatives during the internal Hamas deliberations, mainly extending the term of the consensus government. In return, the Palestinian Authority (PA) would pay the price, as the [Hamas] movement would continue to provide political and legal cover for the government’s work in Gaza. The second alternative is for the government to expedite the Gaza reconstruction file instead of slackening and to find a convenient settlement for the Gaza employees’ issue, instead of discriminating against them for the past months,” he said.

Saleh Zeidan, member of the Democratic Front for the Liberation of Palestine’s political bureau, said on Dec. 3 that the factions are discussing the formation of a national coalition government that represents all of them. This proposition was widely welcomed by all Palestinian factions, in light of the failure of bilateral arrangements to reach a solution.

Head of Hamas’ parliamentary bloc Faraj al-Ghoul told Al-Monitor, “Hamas won’t accept a gratuitous extension for the government.” He accused the government of failing, “as it was Mahmoud Abbas’ government, rather than the Palestinian people’s. It did not fulfill the tasks assigned to it, such as reconstruction, lifting the blockade, merging the ministries, uniting the institutions and preparing for the elections.”

Palestinian Labor Minister Mamoun Abu Shahla revealed on Dec. 1 that Prime Minister Rami Hamdallah would be making calls in Gaza in the coming days to finalize several important issues, mainly to discuss the ministerial amendment with the factions, especially Hamas.

However, a prominent official in Abbas’ office told Al-Monitor on condition of anonymity, “Hamas’ occasional insinuations to toppling the consensus government are devoid of meaning, as Hamas and Fatah are both in a quandary that is worsening by the day. The only way out is through resolving the current problems, which include the crisis of Gaza’s employees, the blockade and the reconstruction of the Strip.”

“Hamas’ threats that it will topple the government and search for other alternatives will only increase internal tensions without providing practical solutions. We know that Hamas is facing a huge historical crisis and that it does not have a magic wand to solve the exploding situation in Gaza, except in agreement with President Abbas,” the official added.

Abu Shahla tried to dispel Hamas’ concerns by saying on Dec. 3 that the Supreme Governmental Committee would decide by the end of December the fate of the Gaza employees’ issue. He put forth three options that the government might resort to, including referring some employees to retirement, holding exams for officials in some important ministries or canceling some job positions.

However, Najat Abu Bakr, Fatah member of the Palestinian Legislative Council, demanded on Dec. 3 to form a national emergency committee instead of the government to take suitable decisions and implement urgent solutions for the exacerbating crises, as the terms “government” and “ministers” were not in line with the Palestinian situation. Bakr’s call is not supported by the first rank of Palestinian leaders.

Al-Monitor learned of a position assessment that Hamas was circulating in the past few weeks about its options after the end of the consensus government’s term.

The assessment stated, “Clearly, the recent stage did not offer any solutions, even if slow, to the problems that the Gaza Strip is suffering from. It seems that the biggest beneficiary from this government is Abbas, who took away Hamas’ legitimacy from the resigned government and did not offer what it demanded as part of the reconciliation agreement. He got what he wanted without making any concessions.”

“Hamas is called to consider quick alternatives to follow up on Gaza’s increasing problems. These alternatives include swift action to make a ministerial amendment that serves the reconciliation and gives Gaza more attention. Another alternative would be a national unity government, although this option would subject Hamas to extortion from the remaining forces, as they will put political conditions and impose a quota system on the ministries,” the assessment read.

Al-Monitor asked the same Hamas official who spoke on condition of anonymity, “What if the above-mentioned alternatives fail to reform the situation in Gaza? Will the movement take matters into its own hands once again?”

The official replied, “Ever since the reconciliation was signed, Hamas has put this option behind it. It is not enthusiastic about ruling again, as long as it is possible to discuss consensual alternatives with the other forces. Ruling Gaza once again is not on Hamas’ discussion agenda, at least at the moment.”

“I hope that Hamas won’t feel obliged to take in the poison once again by forcibly returning to ruling Gaza. The consensus government and President Abbas will personally have to bear the consequences of this alternative, should it happen, as Hamas does not want it. Abbas is watching Gaza’s people suffer, as though they were citizens of a neighboring country, not his own,” he said.