Is Israel trying to keep Hamas from running in Palestinian elections?

The Israeli army has recently arrested dozens of Hamas cadres and leaders in the West Bank in the lead up to the Palestinian elections, which may affect Hamas’ leaders ability to mobilize the masses, launch electoral campaigns and persuade candidates to join their lists for fear of Israeli arrests. 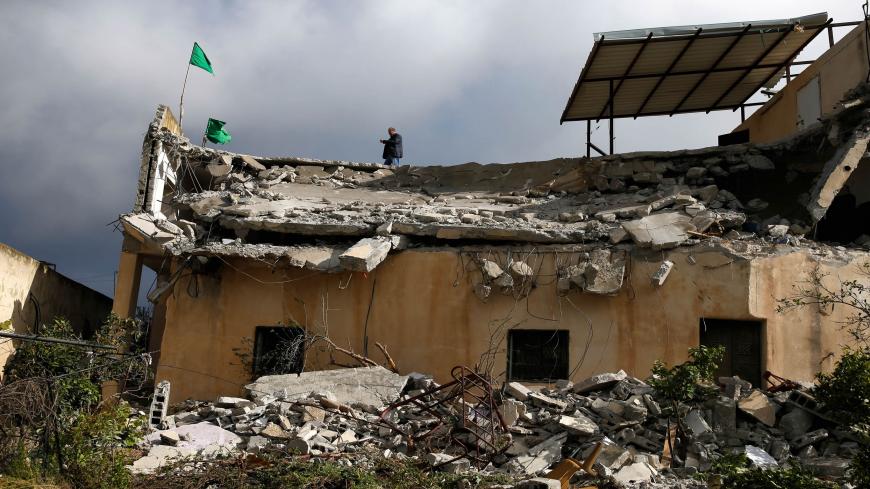 Hamas flags stand on the roof of the house of Palestinian assailant Salah Barghouti after it was partially demolished by Israeli forces in the village of Kobar, near Ramallah, West Bank, April 17, 2019. - Abbas Momani/AFP via Getty Images

The West Bank has been witnessing over the past few weeks intensive arrest campaigns by the Israeli army against dozens of Hamas cadres and leaders, members of the Palestinian Legislative Council (PLC), political leaders, as well as students and union activists.

Most recently, Khaled al-Hajj and Adnan Asfour, both Hamas leaders in the West Bank, and Hamas member in the PLC Yasser Mansour were arrested Feb. 16.

The Israeli army has in the past carried out periodic arrests of members of Palestinian factions in the West Bank, especially Hamas, to thwart their plans to carry out armed operations. However, ever since Palestinian President Mahmoud Abbas announced Jan. 15 the general election dates, Israel has been increasingly arresting and summoning Hamas cadres as part of an intimidation campaign to prevent them from running in the elections.

In January alone, the number of detainees amounted to 461.

The Israeli arrest campaign against Hamas in the West Bank aims to derail the movement’s plan to run in the upcoming legislative elections, by keeping Hamas leaders and cadres behind bars until after the elections are held in May. Meanwhile, Israel is also threatening other potential Hamas candidates with arrest if they end up deciding to run on the movement’s list.

Nayef al-Rajoub, former minister of endowments in the Hamas-run government and a PLC member, told Al-Monitor, “The recent Israeli arrests are aimed at tampering with the upcoming elections while intimidating the potential candidates. These arrests adversely affect candidates and voters, and their effect lingers for several years. We have yet to forget our bitter experience of the 2006 legislative elections. I have spent nearly 100 months in Israeli prisons since these elections without charge, just because I am a member of the PLC representing Hamas. [The recent arrest campaign] may spark concerns among the potential candidates on the movement’s lists over having the same scenario unfold again. The Palestinian Authority [PA] is practicing the same security policy against Hamas cadres to influence the elections.”

Hamas said in a press statement Feb. 16 that the Israeli arrest of movement leaders in the West Bank is aimed at targeting the electoral process. It added, however, that this campaign will neither bring the movement down nor affect its efforts to put an end to the Palestinian division on the basis of partnership and resistance against Israel.

The Palestinian Prisoners Center for Studies revealed Jan. 21 that the number of PLC members whom Israel has arrested since 2006 has reached 60, most of whom were repeatedly arrested while 10 members remain in detention currently.

Khalil Assaf, a member of the Public Freedoms Committee in the West Bank, which is a national group that includes representatives of all factions formed following the 2011 Cairo Agreement, told Al-Monitor, “The Israeli arrests of Hamas leaders will only increase in the lead up to the legislative elections slated for May, as Israel wants to prove that it is the main player in the West Bank. This will further complicate Hamas’ attempts to persuade candidates to join its electoral lists. I advise Hamas not to run for the elections through an electoral list under its name, as this list could be directly targeted by Israel. It is important for the movement not to endanger its citizens and cadres, which will result in the disruption of the PLC.”

In conjunction with the Israeli arrests of Hamas cadres in the West Bank, Israeli intelligence officers have been recently calling Hamas leaders to warn them not to participate in the upcoming elections. They have also sent messages threatening with arrest to anyone who considers running on the Hamas electoral list.

On Jan. 25, Omar al-Barghouti, a prominent Hamas leader in the West Bank, revealed that the Israeli authorities had summoned him to Ofer Prison outside Ramallah in the West Bank and warned him against running in the legislative elections. According to Barghouti, Israeli officers told him that he would immediately be arrested if he announced his candidacy. Barghouti, 67, was released from Israeli prison in late December 2020, where he had been detained since March that year.

At a time when the PA kept mum about the Israeli arrests of Hamas members and leaders, Wasfi Qabha, who served as minister of prisoners’ affairs in the Hamas-run government, said in a Feb. 6 statement to Donia al-Watan website that Hamas activists and supporters received threats from the PA security services that summoned them against the background of the elections and sent them threatening messages to prevent them from participating in any mass events in preparation for the upcoming elections.

Imad Abu Awwad, a researcher at Al-Quds Center for Palestinian and Israeli Studies, told Al-Monitor, “Israel will continue its arrests of Hamas cadres to prevent the movement from influencing the election results and ultimately reduce the number of Hamas representatives in the PLC while portraying it as a small political Palestinian current. Potential Hamas candidates know that they will be subject to Israeli targeting and arrests, which is why Hamas must organize its ranks in the West Bank and push forward cadres for electoral propaganda, supervise the ballot boxes and make sure to practice its constitutional right to run for the elections and be elected.”

The Israeli arrests of dozens of Hamas cadres and leaders in the West Bank raise many questions as they are taking place in conjunction with the movement’s preparations for the upcoming elections and are hindering Hamas’ efforts to mobilize the Palestinian masses or launch electoral campaigns. This may lead some potential candidates to think twice before joining a list formed by the movement for fear of Israeli arrest.

Mahmoud Mardawi, a member of Hamas' National Relations Office, told Al-Monitor, “The movement considers the election project as part of its national vision, one that entails heavy costs such as Israeli arrests and security prosecutions. But this should not stop us from taking part in the elections. Our candidates shall not be affected despite the Israeli threats. Hamas has a panoply of options to confront the continuing Israeli arrests, including increasing the number of its candidates in the Gaza Strip at the expense of the West Bank to avoid being targeted there.”

The legislative elections will be held May 22. During this period, many developments could take place and more Israeli arrests of Hamas cadres in the West Bank could be carried out as Israel tries to avoid a replica of the 2006 elections, when it was surprised by a sweeping Hamas victory.

A Palestinian official close to Abbas told Al-Monitor on condition of anonymity, “Israel will definitely intervene in the Palestinian elections because it does not want us to experience democratic life and seeks to keep us under its military control. But we will continue on the electoral path despite the Israeli practices. We are in contact with international parties to pressure Israel not to intervene in the Palestinian elections, but we still don’t have any guarantees in this regard.”