Israel continues to pursue leaders of the Hamas movement in the West Bank, namely Hamas candidates in the legislative elections in a bid to undermine the movement's chances to win the vote. 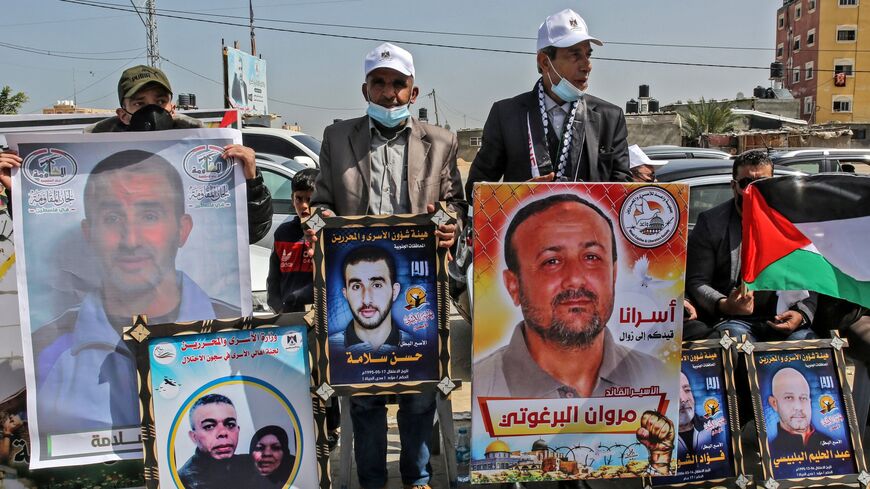 Palestinian demonstrators rally in support of Palestinians currently in Israeli jails, in Khan Yunis in the Gaza Strip, on April 5, 2021. The larger portraits of prisoners they are holding are of Hassan Salameh (L) of Hamas and Marwan Barghouti (C-R), a longtime Fatah member who is running his own slate of candidates in May elections. Salameh has been disqualified from running because he is not on the electoral registry. - SAID KHATIB/AFP via Getty Images

RAMALLAH, West Bank — In the late hours of April 12, Israeli special forces arrested Najeh Assi, a candidate for the Hamas movement in the upcoming Palestinian legislative elections and the movement’s representative in Ramallah and al-Bireh governorate, after raiding his home in the city of al-Bireh near Ramallah in the central West Bank.

Assi’s arrest came less than a week after Hassan al-Wardian, another Hamas candidate, was arrested April 6 at dawn. after Israeli forces raided his house in the West Bank city of Bethlehem.

Wardian, 57, was the first candidate on the “Jerusalem is Our Goal” list to be arrested following the list’s official registration with the Palestinian Central Election Commission on March 29. Wardian is No. 19 on Hamas’ list.

Even before Hamas registered its electoral list, Israel had launched an arrest campaign against leading candidates on Hamas’ list in the West Bank. The number of arrested candidates has reached 11, including seven who were apprehended shortly before the list's registration and two who already were imprisoned. Among those arrested were Mustafa al-Shunnar, Adnan Asfour, Yasser Mansour, Khaled al-Hage, Abdel Baset al-Hage and Omar al-Hanbali.

On April 13, the members of Hamas’ electoral list held a press conference in Ramallah following Assi’s arrest, calling on the international community to intervene to put an end to the Israeli arrest campaign against its candidates.

The arrests have not been limited to candidates, but also involved top officials and leading figures working for the movement ahead of the elections. On April 12, Anas Rasras, Omar al-Qawasmi and the head of the Palestine Scholars League Sheikh, Mustafa Shawer, were arrested during Israeli raids of their homes in Hebron.

On April 9, top Hamas official Rizk Rajoub was arrested after his house in Hebron was stormed and searched by Israeli forces.

The Ramallah-based Foreign Ministry and human rights and other organizations condemned the arrests of Wardian and Assi, describing the move as an interference in Palestinian elections.

The latest arrests come amid concerns among Hamas members about more Israeli action against the movement’s candidates in the coming weeks.

In this context, Mohamad Sabha, a Hamas leader and candidate in the legislative elections, told Al-Monitor, “There are 11 candidates on the list currently incarcerated in Israeli prisons. Two of them are serving a life sentence, and the remaining nine were arrested upon announcing the Palestinian elections, including seven candidates that were arrested before Hamas’ list was registered, and two candidates arrested following the registration.”

Commenting on the movement’s fear of further arrests, Sabha said, “As they registered for the elections, the candidates prepared themselves for arrests, pursuits, travel bans, raids of their homes and confiscation of their money.”

“We condemn the [Israeli] occupation’s arrests that amount to a violation of basic human rights and democratic foundations, and we call on the world countries and human rights institutions to pressure Israel to stop the arrests,” he added.

The Palestinian factions had agreed during talks in Cairo in March to a Palestinian Legislative Council based on parliamentary principles, which would allow each parliamentary bloc to replace any of its arrested members with another member. Such a move would prevent any obstruction of parliamentary activity and a repeat of the 2006 experience. This agreement, which is part of a plan to counter any Israeli attempt to obstruct the vote, will morph into a law once the new council convenes.

Sabha added, “Hamas does not want the electoral process to be influenced by any development, and insists on holding these elections on time.” He stressed that the arrest of candidates will affect the list’s communication activities with the public, in addition to the electoral campaign and attraction of votes. That is because each candidate has influence in his or her area. Subsequently, arrest will prevent them from exercising this influence, Sabha said.

Israel, meanwhile, fears that Hamas might win the legislative elections, similarly to the 2006 vote.

Speaking to Israel's Public Broadcasting Corporation Kan on April 1, Coordinator of Government Activities in the Territories Kamil Abu Rukun said Israel will halt all its security coordination with the Palestinians if Hamas wins the legislative elections. “It is a major mistake to go through with these elections due to the high risk of Hamas winning.”

Israel’s Walla news website quoted April 9 Israeli officials as saying that US Secretary of State Antony J. Blinken discussed with Israeli Foreign Minister Gabi Ashkenazi the two countries’ concerns about the Palestinian legislative elections and about a potential Hamas victory. Yet the two sides have not expressed these concerns publicly so as to avoid the accusation of thwarting the elections.

After Hamas officially registered its list at the Palestinian Central Election Commission, the candidates in the West Bank held their first meeting April 3 at one of Ramallah’s hotels.

Alaa Hamdan, Hamas leader and candidate, told Al-Monitor that Hamas took several principles into account when forming the list, most notably demographic diversity and distribution in each of the governorates. There are young people and female candidates on the list, in addition to competent figures in the scientific and trade union spheres. That would help bring about the desired change and reforms in the council and enable the enactment of laws and legislation that would further the citizens’ interests, he added.

He said the list consists of 88 candidates from the Gaza Strip, including Palestinian prisoner Hassan Salameh. But the latter’s nomination on the list was rejected because his name is not registered on the voter list, and that is a precondition for any candidacy. There are also 44 candidates in the West Bank, including the two candidates sentenced to life in prison, and the nine recently arrested candidates.

The candidates’ gathering was Hamas’ first public meeting in the West Bank in years. It allowed the candidates to get to know each other, get some paperwork done and discuss work mechanisms in preparation for the elections.

Commenting on whether or not Hamas has a plan to confront the Israeli arrest campaign, Hamdan said, “The occupation may target the candidates at any time, and already sent threat messages not only to the candidates, but also to those who could be working for the movement before and after the registration of the electoral list. Hence, nothing guarantees that the occupation refrains from making arrests.”

Israel is trying “to intimidate the candidates. The arrests consist of direct interference in the Palestinian elections, and they seek to prevent the list from carrying out its electoral campaign,” he added.