Palestinians in the West Bank and Gaza Strip were deeply divided over President Mahmoud Abbas’ address to the UN General Assembly meeting, as Hamas and Fatah exchange attacks in the media while arrest campaigns on both sides continue. 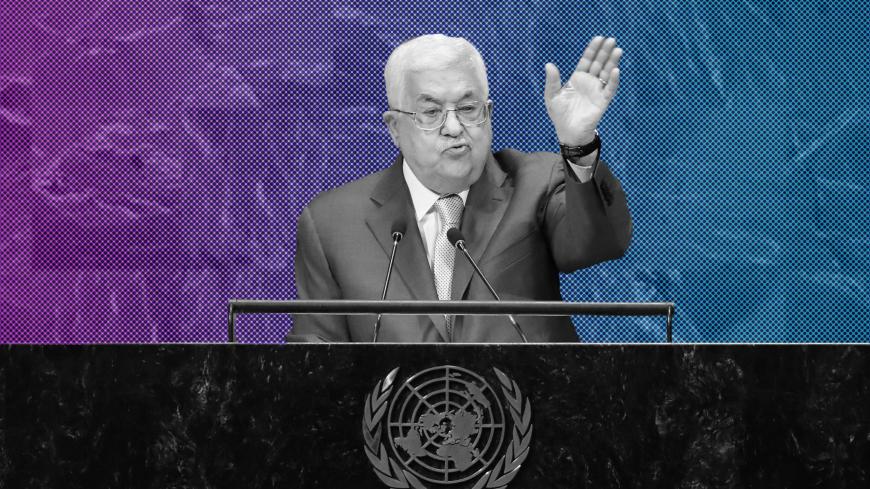 GAZA CITY, Gaza Strip — Palestinian President Mahmoud Abbas gave a speech before the United Nations Sept. 27, triggering a wave of media accusations between Hamas and Fatah. Security forces in the West Bank and the Gaza Strip targeted advocates of both parties in reciprocal arrest campaigns between Sept. 24 and 27.

During his speech before a session of the UN General Assembly, Abbas addressed Hamas, saying, “Maybe in the coming few days we’ll witness the last round of talks and then maybe we will take another action.”

He added, “We will not bear any responsibility if Hamas insists on refusing to abide by the agreement,” in reference to the Gaza Strip.

Hamas responded to Abbas with an official statement Sept. 27, saying, “By describing the resistance as a militia and terrorist group before the UN and refusing its arms, Abbas stabbed the Palestinian people, their history, resistance and martyrs … in the back. He also used that platform to announce division from the Gaza Strip and to threaten its people, thus jeopardizing the future of the reconciliation and the national composition.”

Abbas’ statements against Hamas sparked concerns in the Gaza Strip, and this appeared clearly on social media. People wondered what the new “action” Abbas spoke about against Hamas would be and how these measures might reflect on the economic situation of Palestinians in Gaza.

Thousands of Fatah supporters gathered in public squares in the West Bank in front of big screens that Fatah had placed in some cities to broadcast Abbas’ speech. Meanwhile, activists close to Hamas hung a large banner Sept. 26 in Gaza City, with anti-Abbas slogans.

Fatah spokesperson in the Gaza Strip Atef Abu Seif told Al-Monitor that ahead of Abbas’ speech, security forces in the Gaza Strip summoned and arrested more than 200 Fatah members because Fatah was planning to hold events in Gaza to support Abbas.

Abu Seif said that the security forces informed the summoned Fatah members that events supporting Abbas’ speech were forbidden, including gatherings or broadcasting the speech on big screens in public squares.

Abu Seif said Abbas’ speech “was comprehensive and reflected the aspirations of the Palestinian people suffering from Israeli and US conspiracies.”

He accused Hamas and the security forces in the Gaza Strip of collaborating with this conspiracy through their media attacks of Abbas and his speech.

Dumairi said, “The figures that Hamas published in the media about the number of people arrested in the West Bank are inaccurate.” He refused to disclose the correct number, and he accused the Hamas-affiliated security forces of launching an arrest campaign in Gaza to forbid citizens from holding events that support Abbas’ speech.

The Palestinian Center for Human Rights published a statement Sept. 27 asking the security forces in the West Bank and the Gaza Strip to halt all politically motivated arrests and summonses and to immediately release those in custody.

In a Sept. 26 session of the Palestinian Legislative Council in the Gaza Strip, Hamas members attacked Abbas' speech. A member stated that “Abbas does not represent the Palestinian people. He only represents himself.” They also accused him of usurping the PA since the end of his term in January 2009.

Saleh Masharqeh, a media professor at Birzeit University, told Al-Monitor that the media campaigns of Palestinian factions supporting or opposing the president’s speech are pointless. Each party is interpreting the speech according to its own inclinations.

Masharqeh said Fatah and Hamas have been lashing out at each other for years and nothing has come out of their disputes. On the contrary, their behavior has weakened their stances before their public base. He called on Palestinian factions to create a clear culture of political rivalry and dispose of the sarcasm that has been rampant on social media.

Ibrahim al-Madhoun, a political analyst close to Hamas, told Al-Monitor that Hamas’ media attack on Abbas and his speech before the UN stems from the ongoing sanctions on the Gaza Strip and Abbas’ threats from the UN to impose more.

Palestinians were divided over Abbas’ speech. They are now waiting for the Palestinian Central Council to translate the speech into decisions, especially regarding relations with the United States and Israel, during its upcoming meeting due in mid-October.