How Hamas scored a win in West Bank student elections

The victory of Hamas' student branch in the elections at Birzeit University in the West Bank reflects the Palestinian public support for Hamas, following the arrests and restrictions it has been subjected to by both the Palestinian Authority and Israel. 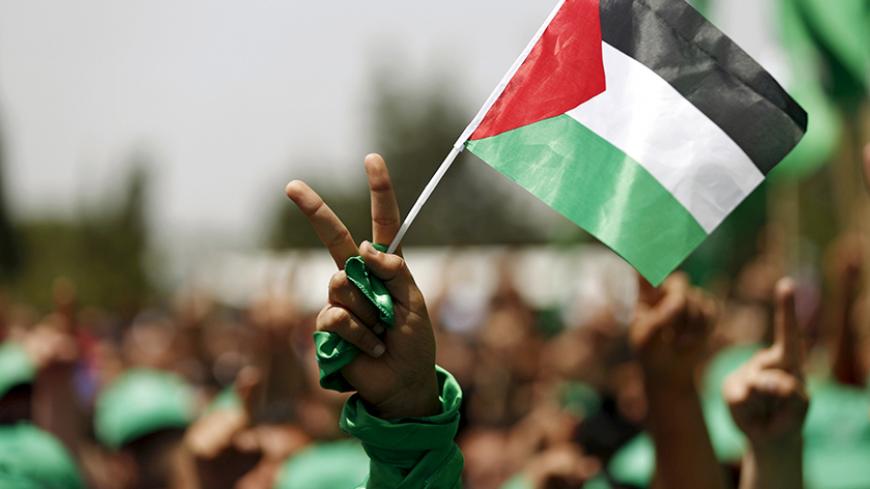 A student supporting Hamas holds a Palestinian flag in a rally during an election campaign for the student council at the Birzeit University in the West Bank city of Ramallah, April 26, 2016. - REUTERS/Mohamad Torokman

As presidential, legislative and municipal elections have been disrupted in the Palestinian territories since 2006, due to the Fatah-Hamas divide, the university elections seem to be the most credible indicator to identify the weight of the Palestinian political forces.

The elections of the student cabinet, in which 9,000 students voted, at Birzeit University in the West Bank on April 27, resulted in Hamas' student wing the Islamic Bloc winning 25 out of 51 seats. Fatah's student wing, the Shabiba movement, won 21 seats and the Democratic Pole affiliated with the Palestinian Front for the Liberation of Palestine obtained five seats.

Ibrahim Jaq, the Islamic Bloc coordinator at Birzeit University, told Al-Monitor, “The reason behind the bloc winning the elections is its work among the students throughout the year; the student cabinet led by the bloc provided many services to the university students. This has resulted in the substantial support for the bloc and its victory in the elections with the largest number of votes. In addition, the students have opted for the resistance and Jerusalem intifada, and we also did not distinguish between this or that party in the provision of services. Thus many Christian students and unveiled female students voted for us, in light of the Israeli arrests of the student cabinet’s head and 30 activists, and the Palestinian Authority's [PA] pursuit and restrictions against the bloc’s activists.”

Hamas regards the victory of its student branch to go beyond the campus of Birzeit University. In an official statement April 27, it said that the victory is a referendum on its armed resistance program against Israel, a message of support for the Jerusalem intifada and a sign showing Hamas’ strength.

Khaled Meshaal, the head of Hamas' political bureau, said April 28 that the Islamic Bloc’s victory is a proof of the Palestinians’ support for the resistance and opposition to the security coordination between the PA and Israel.

Remarkably, as part of the competing parties’ electoral campaign the day prior to the vote, the Islamic Bloc displayed what it viewed as Hamas’ political and military achievements.

While Fatah did not issue an official statement commenting on its defeat in the elections, its officials expressed their disappointment. Sufian Abu Zaida, a member of the Fatah Revolutionary Council, said, “How many defeats are still needed before Fatah rises up?”

Nabil Amr, the former adviser to President Mahmoud Abbas, said that the defeat in the Birzeit University’s elections is a defeat to the Palestinian Liberation Organization (PLO), which has continued to say that it has the Palestinian people’s support.

Fatah member of parliament Majed Abu Shamala demanded that an inquiry committee be formed to look into the reasons behind Fatah’s defeat in the elections.

Hamas’ victory at Birzeit University can be interpreted at two levels: place and timing. The victory came following the wave of arrests and pursuit by the PA and Israel of its students and activists, most notably former student cabinet head Seif al-Islam Dughlas, who was arrested by Israel in December 2015.

As for the place, Birzeit University is the oldest Palestinian academic institution. It was founded as a school in 1924, then turned into a college, before it became a university in 1961, where liberal rather than Islamic orientations prevailed. The PLO and Fatah have considered it their historic stronghold in Palestine. Yet for the second year in a row, Hamas is winning in the elections there.

Speaking to Al-Monitor on condition of anonymity, a member of Fatah’s Central Committee, said, “Fatah’s defeat at Birzeit University was anticipated as the university students judged the movement’s political leadership rather than the performance of its students branch. Unfortunately the PA’s performance has been weak in the eyes of the Palestinian street recently, particularly since the outbreak of the current intifada. This is especially true since it was seen as a party working as a security agent for Israel, which prompted the university students to vote against the PA and Fatah’s political program in order to sanction them.”

Remarkably, the Islamic Bloc’s policy at Birzeit University seems to have been a drive behind non-Hamas students voting for Hamas. The bloc has adopted an unprecedented openness to the other doctrinal orientations, allowing unveiled students to take part in their activities for the second year in a row.

It seems that the Islamic Bloc has a solid organizational structure. Despite the arrests of its most visible activists — namely prominent Hamas cadres such as the head and members of the Birzeit University student cabinet — lower-level activists have proven that they are no less important, and that they can lead and win an intense battle.

Sari Arabi, a Palestinian political analyst in the West Bank, told Al-Monitor, “The elections at Birzeit University are one of the most important elections in the history of the Palestinian student movement because it took place between the Islamic Bloc — which has been banned by the Israeli occupation since 2000 and subjected to the PA's restrictions — and Fatah’s Shabiba movement — which was supported by the PA. The Birzeit University elections in general have been a sign of Palestinian discontent with the PA and its policies.”

Given the difficult times the movement has been experiencing in the West Bank, the victory in Birzeit’s student elections was a much-needed win for Hamas. It delivers a message of support to its members, who have been facing restrictions imposed by the PA and Israeli security forces. At the same time, Fatah’s loss fans the flames of internal disputes within the party, despite Fatah receiving financial support from the PA and not facing security restrictions like those imposed on the Islamic Bloc.