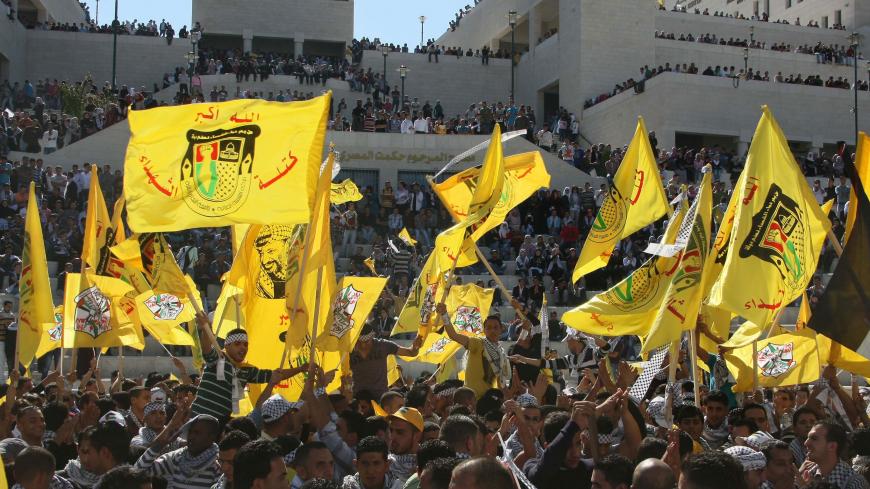 Public protests were staged March 14-15 in the Gaza Strip against the dire living conditions and harsh conduct of the Hamas-affiliated security forces against the protesters. Meanwhile, reactions to these incidents in the West Bank appeared in the form of media statements or measures on the ground.

Palestinian President Mahmoud Abbas described Hamas as a “dark movement that will end up in the trash can of history.” This came during a phone conversation between Abbas and Fatah spokesman Atef Abu Seif who was injured March 19 during the events in Gaza. The video of the conversation was posted on Facebook.

PLO Executive Committee Secretary-General Saeb Erekat tweeted March 15 his condemnation of Hamas' attacks on the protesters demanding an end to the movement's rebellion.

On March 18, Hussein al-Sheikh, a member of Fatah’s Central Committee, told Al-Arabiya that Gaza’s protests are against Hamas’ oppression and that Fatah supports them.

Hamas accused in a March 19 statement Fatah and the Palestinian Authority (PA) of exploiting the protests to stir security tension in the Gaza Strip and to plant the seed of security chaos once again.

Meanwhile, Fatah's student party, Shabiba, at An-Najah National University in Nablus announced in a March 17 statement banning the Islamic Bloc, Hamas’ student wing, and closing its headquarters. Shabiba denounced Hamas’ actions in the Gaza Strip against the protesters and said it would not allow the presence of an extension of Hamas at the university.

On the same day, the Islamic Bloc said it had received a notice from the university banning its activities until further notice and without stating a reason. It labeled the decision as a form of surrender by PA security institutions to foreign pressure and called on the university to reconsider the decision. It added that the decision perpetuates the suffering of its members under security pursuits, torture and political detention from Israel and the PA.

The step taken by Shabiba against the Islamic Bloc is unprecedented in the context of student bodies, reflecting Shabiba’s power and influence and its ability to affect the university administration, which is headed by acting Prime Minister Rami Hamdallah.

Ibrahim Shalhoub, who represents the spokesperson for the Islamic Bloc, told Al-Monitor, “Maher Natsheh, the acting president of An-Najah notified me March 17 of the ban of our activities without a prior warning or an official letter. He claimed they feared political problems at the university. Meanwhile the other student organizations continue their activities. We contacted rights groups to convince the university to reconsider the decision, but to no avail.”

Raed Dabei, member of Shabiba in the West Bank, told Al-Monitor, “This measure against the Islamic Bloc was necessary to turn the attention to Hamas’ violations in the Gaza Strip. The ban was a successful tactic. The incidents in Gaza adversely affected the West Bank. We tried to talk the bloc into condemning Hamas’ conduct in Gaza, but it refused.”

The Islamic Bloc accuses Palestinian security forces of obstructing its work at West Bank univerisities by pursuing its members. Since 2018, more than 400 of its students have been detained by the PA.

Muhannad Karaja, lawyer with Aldameer Organization for Human Rights, told Al-Monitor, “Fatah’s Shabiba pitted against the bloc and pushed the university to take this decision. This is tantamount to a misuse of power. We will file a lawsuit to appeal against the legality of this decision that violates freedom of expression, harms syndical work and spills the Gaza tensions into the West Bank.”

The ban on the Islamic Bloc stirred angry reactions. The Progressive Student Labor Front politically linked to the Popular Front for the Liberation of Palestine issued March 17 a statement condemning the decision as harming plurality.

On March 18, the Progressive Student Union Bloc affiliated with the Palestinian People’s Party dismissed Shabiba’s decision as arbitrary. It perceived the ban as depriving the bloc of its syndical rights and bringing the political Palestinian disputes to university halls.

Khalil Assaf, member of the Public Freedoms Committee in the West Bank, described March 18 the decision as “apartheid” and an unacceptable attempt to eliminate the other.

Mohammad al-Kobri, director of public relations at An-Najah National University, told Al-Monitor, “News about the university banning the bloc’s activities is incorrect. Student activities were frozen for both Shabiba and the Islamic Bloc to keep tensions from spreading at the university, especially after the events in the Gaza Strip. We want to avoid friction among students.”

Commenting on Kobri’s argument, Shalhoub said, “Shabiba practices its activities through An-Najah Student Council that it controls. It will not be affected by the alleged ban.”

Karaja noted, “An-Najah’s announcement of banning the two student parties is a blatant maneuver aimed to justify the decision against the Islamic Bloc. Shabiba controls the Student Council; the Islamic Bloc is the only one damaged by the ban.”

In the early hours of March 17, the house and car of Azzam Salhab, Hamas Palestinian Legislative Council (PLC) member, were targeted in Hebron by gunmen. The attack caused material damage but no injuries.

While Hamas blamed the PA of being behind the incident, Adnan al-Damiri, a spokesman for the Palestinian security services, said on the same day that the investigation was ongoing in order to determine the circumstances of the incident.

Fathi al-Qarawi, a Hamas PLC member from the West Bank, told Al-Monitor, “Shabiba’s ban on the Islamic Bloc is a political decision that threatens the Palestinian arena and serves Israel. This is unacceptable. The university administration must intervene to protect the students’ right to practice their syndical activities and to prevent any prejudice to student bodies.”

Hamas is fully aware that the Islamic Bloc at West Bank universities is its only platform available at the present time, amid the security crackdown by Israel and the PA. This turns the bloc into a favorable environment for the dissemination of Hamas’ ideas and for attracting supporters to its ranks.

Hamas has, therefore, sought to promote the bloc’s activities to boost its own influence in the West Bank. By doing so, the Islamic Bloc becomes a systematic target for the PA and its organs.