Adnan Abu Amer considers the implications of a potential victory by Hamas in the forthcoming Palestinian elections. 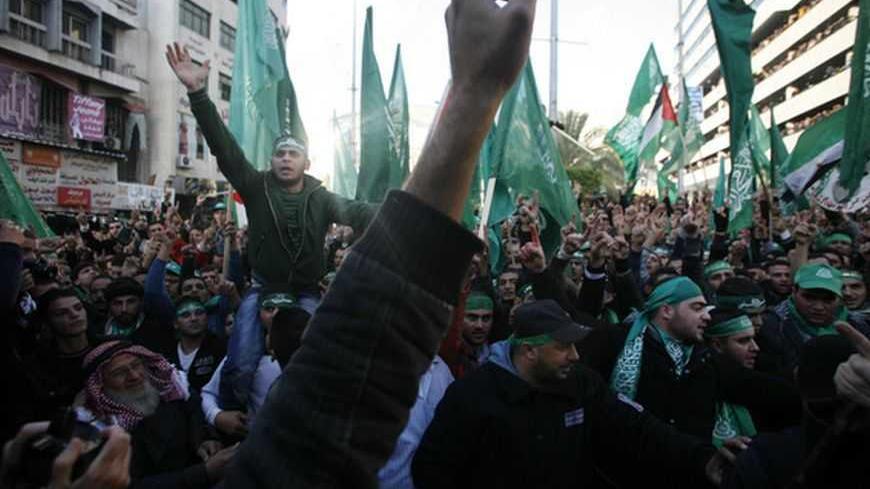 Palestinians wave Hamas flags during a rally in the West Bank city of Nablus, marking the 25th anniversary of the founding of Hamas, Dec. 13, 2012. - REUTERS/Muammar Awad

Palestinians in the West Bank and Gaza Strip have updated the electoral register in preparation for a decision that may be issued to call for legislative and presidential elections, in the event that the efforts for reconciliation between Fatah and Hamas succeed.

It is no longer a secret that Hamas, which came to power by way of elections that were held during the same period in 2006, fears that the upcoming elections will put an end to its existence on the Palestinian political landscape. This explains the movement’s state of alert. Hamas has been intensifying its efforts to demonstrate that its term in office over the past few years has been successful, in spite of all obstacles and hurdles. The pertinent question, however, is: Will the Palestinian movement succeed in its quest?

First and foremost, one should point to the major reasons behind Hamas’ victory in the elections held on Jan. 25, 2006. At the time, Hamas employed both political and ideological tactics. It prepared itself for the “historical test,” and therefore won by a landslide.

Hamas had also espoused a policy of armed resistance, emerging as a Palestinian military resistance movement in the first and second intifadas. This has played a major role in the movement’s favor, which increased its numbers and support. Hamas has become, in the eyes of young Palestinians, the natural heir of Fatah’s original project. This is especially true, as people have remained oblivious to international changes and regional developments, which has driven them to continue to support the armed resistance.

Moreover, Hamas has espoused a balanced media and political rhetoric, marked with religious concepts, securing a favorable position in the Palestinian society, which is “religious” by nature. This rhetoric that was employed politically, socially and economically was the influencing factor in attracting supporters and voters, during a period dubbed the “Islamic awakening” by the movement itself.

What’s more, Hamas’ social presence was an additional factor in attracting votes. Hamas established an extensive network of charity, social and service institutions, such as medical clinics, institutes for Quran memorization, Zakat committees, kindergartens, clubs and schools. These charitable establishments were designed to provide help for the needy and the sick, and to educate young people. They were generously funded by Islamic societies from across the Arab World, and by advocates of the movements themselves.

In the same vein, Hamas had been exposed to successive Israeli strikes, targeting its leaders and icons, which made it gain the sympathy of the public. Furthermore, Hamas also had been active in field work, such as establishing hospitals to follow up on the health status of the injured and victims. The movement also organized funerals and wakes. This is not to mention that Hamas sought to document its armed operations, using them as propaganda to attract more members and supporters.

Nevertheless, if these factors contributed to the victory of Hamas in the 2006 elections, the movement fears that during the upcoming elections these same factors will end up neutralizing the role of the movement in the new government. This is especially true in light of the many violations that have taken place without control or any sentence imposed on violators in the government.

Moreover, many influential Hamas leaders have talked about the negative repercussions of the upcoming elections on the movement, as the movement risks disappearing from the government. Indeed, on the eve of its control over Gaza in mid-2007, the movement found itself at a crossroads between what it stands for as a popular movement representing the people, and a party affiliated with the government. Thus, the officials from the government and those of the movement itself overlapped, making it difficult to distinguish between the obligations and liabilities of the two sides. This had a negative impact on Hamas’ image, as the unsatisfactory performance of certain MPs and ministers failing to live up to the people’s aspirations reflected poorly on the organization, which is seen as closely affiliated with the government.

Some pundits believe that rising to power could weaken the movement, as seizing power is the final stage of the trajectory of every political movement. In this regard, Hamas risks reproducing Fatah’s scenario.

This requires shedding light on the reasons behind Fatah’s defeat in the elections. The movement’s leaders lacked disciplinary behavior, and were marked with conceit and pompousness. Fatah also excluded some of its main cadres and maintained those who were rejected by the people. The movement’s term was marked by years of venal bureaucracies, nepotism and cronyism, not to mention a nasty governmental system spoiled by privilege and a lack of self-evaluation, which provoked Palestinian society.

While Hamas was highly active and supported by youth, Fatah was becoming increasingly secluded, which deepened rifts within its structure and led to its political fragmentation.

Thus, some mentors call upon Hamas to be content with its status as an opposition in the upcoming legislative council that would monitor the performance of the government, instead of drowning in the complications of governance and rule, which would take its toll on any movement.

While Palestinian factions refused to participate in Hamas’ government in 2006, today it seems that some partisan coalitions and alliances may emerge in preparation for the upcoming elections.

Given the fact that Fatah has been mobilizing its forces, and what is left of the Palestinian left-wing movement is getting ready to form a parliamentary bloc, Hamas is likely to turn towards Islamist candidates — be they independents, Salafists or Islamist jihadists. This is especially true, as the Islamists have updated their electoral rolls, which suggests that they might participate in the elections, after having boycotted them for many years.

While this analysis was designed to provide a preliminary assessment of the chances of Hamas’ victory in the upcoming elections, shedding light on the implications of its involvement in power and addressing them in their different forms, the author ought to answer the pertinent question: Will Hamas suffer the same fate as Fatah as a result of its immersion in governance?

In the event Hamas found itself unable to face its opponents — whether Fatah, the Palestinian left-wing or the independents — it will likely opt for an alliance with the Islamists to form a strong parliamentary bloc, which would resemble the Muslim Brotherhood’s experience in Egypt to face opposition forces.

Nevertheless, should the Hamas-opposing mainstream win, its first tasks would be to prosecute the armed forces — which are led by Hamas — along with jihadists and other groups.

Will this unlikely alliance be forged between Islamists and Hamas in the coming days? We’ll just have to wait and see.

Adnan Abu Amer is Dean of the Faculty of Arts, and head of the Press and Information Section, as well as a lecturer in the history of the Palestinian issue, national security, political science and Islamic civilization at Al Ummah University Open Education.