Various Palestinian factions, including Hamas, have rejected President Mahmoud Abbas’ decision to postpone the legislative elections and his call to form a unity government. 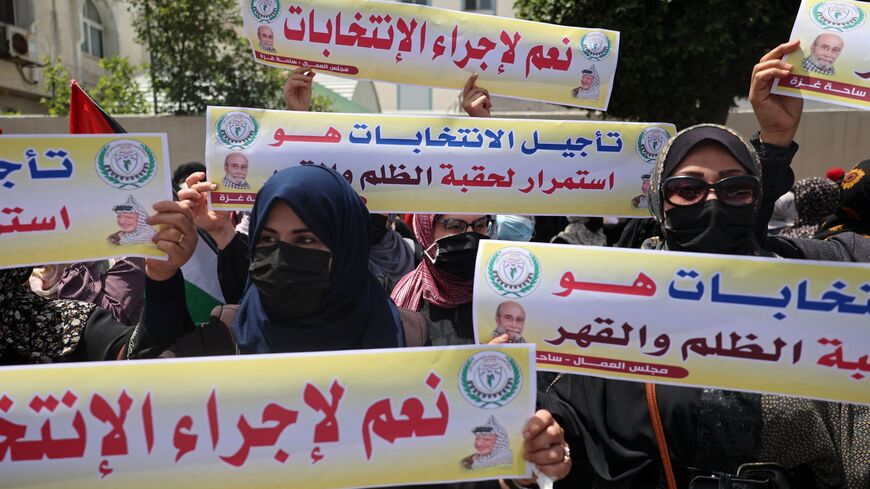 Palestinians are still recovering from President Mahmoud Abbas' decision April 29 to postpone the legislative elections that were slated for May 22. The Palestinian factions have begun talking about new consultations to get out of the legal and political crisis, without any clear vision of what the next phase will be, amid fears that mutual accusations between Fatah and Hamas will resume and that reconciliation hopes will dissipate.

In a radio interview broadcast May 2, Abbas’ spokesman Nabil Abu Rudeina said the formation of a national unity government is one of the measures expected for the upcoming period after the postponement of elections, in addition to the strengthening of the Palestinian Liberation Organization and the possibility of convening the PLO’s Central Council to draft specific policies.

Ahmed Majdalani, a member of the PLO’s Executive Committee, told Al-Ayyam newspaper May 1 that contacts with various factions would begin in a bid to form a consensus government.

However, Mousa Abu Marzouk, the deputy head of Hamas abroad, told the Quds News Network on May 2 that Hamas would not agree to form a government without elections.

Hamas spokesman Fawzi Barhoum told Al-Monitor, “The Palestinian arena is witnessing an unprecedented disruption of political and constitutional institutions and a strategic campaign must be launched to arrange the internal situation, starting with dialogues with the rest of the factions, and calling for a comprehensive national meeting to get out of the crisis and end Abbas’ monopoly on Palestinian decision-making.”

He added, “Hamas has joined the election process to rebuild the Palestinian institutions on democratic foundations, and today we are required to confront Abbas’ decision to suspend the elections for the sake of a narrow partisan interest, and his concerns that Fatah could lose to Hamas. But we also blame Israel for meddling in Palestinian matters.”

Talal Abu Zarifa, a member of the political bureau of the Democratic Front for the Liberation of Palestine, told Al-Monitor, “Abbas took the decision to postpone the elections without taking into account its repercussions. The Palestinian situation cannot keep going like that with presidential decisions and decrees issued without consultations with the rest of the factions.”

He added, “We have several options to respond to his decision. Most importantly, we will form a broad national front to make him [Abbas] backtrack on the decision, and to take serious steps to rebuild the Palestinian political system. And we will call again for an urgent meeting for the general secretaries of the Palestinian factions. The formation of a unity government is not going to achieve anything for us. The crisis necessitates a broader framework for dealing with the situation, as such a government is not very likely to end the division.”

The Palestinian Al-Ayyam newspaper reported May 3 that the political bureau of the Popular Front for the Liberation of Palestine  is working on a practical vision to address the Palestinian issue, which is not only limited to addressing the postponed elections, but also to seek a comprehensive national alignment to deal with the crisis, and save the national project from fragmentation and division through practical steps.

Kayed al-Ghoul, a member of the Popular Front for the Liberation of Palestine politburo, told Al-Monitor, “Postponing the elections has inflicted a deep crisis on the Palestinian political arena. The decision was not approved by the people who will have difficulties accepting it as it means disrupting Palestinian political life. The swiftest option to deal with what is happening is to call for the Palestinian National Council to convene, agree on electing its members, renew the PLO structure and reconfirm its role after it had been neglected and weakened.” He said "all means of pressure," should be placed on Abbas "to untangle the internal crisis." He said the pressure should include the holding of a general national conference.

On May 3, 22 electoral lists announced, in a simultaneous press conference in Gaza and Ramallah, the formation of the “Coordinating Council for Electoral Lists,” and their agreement on steps to maintain pressure on Abbas to go through with elections.

Ahmad al-Mudallal, a leader of the Islamic Jihad movement, told Al-Monitor, “Postponing the elections requires the Palestinian forces to think about a national program to continue the fight against the [Israeli] occupation forces, and to fulfill what was agreed upon in Cairo in February, in order not to deepen the [Palestinian] division. This is true despite the fact that the elections are not the true answer to end the division, since Abbas continues to monopolize decision-making. It is necessary to form a unified national leadership for a comprehensive uprising against the occupation forces.”

Senior Fatah officials told Al-Quds Al-Arabi newspaper May 2 that the consultations being held to discuss the Palestinian situation after the decision to postpone the elections do not include the two defecting Fatah electoral lists led by Nasser al-Kidwa and Mohammed Dahlan.

In an April 30 statement, Dahlan said the decision to postpone the elections was illegal and issued by a president who had lost his legitimacy, and was endangering the future of Palestinians. He called on the international community to stop providing diplomatic and financial cover for what he described as a corrupt dictatorship.

Kidwa, the head of the Freedom List, said in a May 1 press conference in Gaza that it was necessary to form a government of factional competencies to face the challenges, rebuild the PLO, form a new Palestinian National Council, change the existing political frameworks, create a new political body and reject any empty solutions to address the crisis.

Abdullah Abdullah, a member of the Fatah Revolutionary Council, told Al-Monitor, “The fact that there were 36 electoral lists [running in the legislative elections] indicated the presence of external, regional and international parties that wished to intervene in the Palestinian affairs, and saw the elections were the right opportunity to do so. It is only normal to fear for our people in the coming period, but we also count on the awareness of the people and we are open to all ideas and proposals.”

It is noteworthy that most of the proposals by the factions to find alternatives to postponing the elections came from the Gaza Strip, which is controlled by Hamas.