Hamas has refrained from responding and even foiled attempts by other factions to launch rockets from Gaza toward Israel. 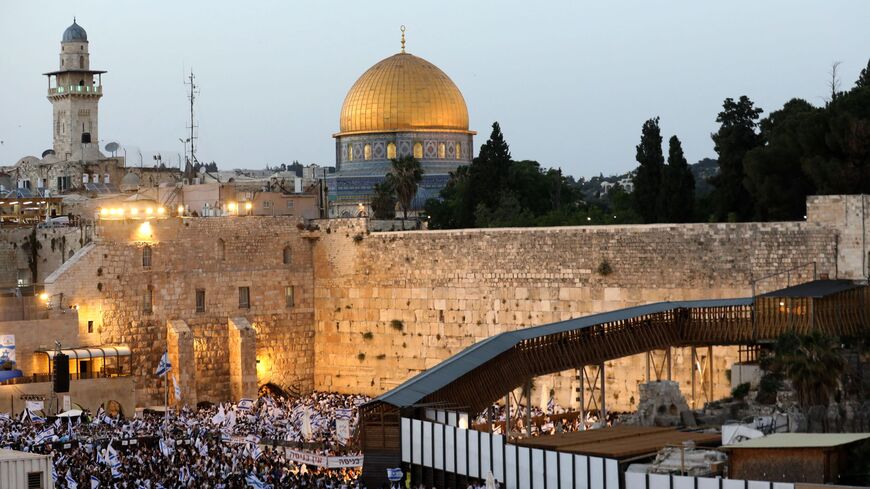 Demonstrators gather with Israeli flags at the Western Wall in the old city of Jerusalem on May 29, 2022, during the Israeli flag march to mark Jerusalem Day. - GIL COHEN-MAGEN/AFP via Getty Images

GAZA CITY, Gaza Strip — A senior security source from Hamas revealed to Al-Monitor that the movement’s field security forces in the Gaza Strip have foiled several attempts by various Palestinian factions — which he refused to name — from launching rockets toward Israeli cities and towns on May 29, in conjunction with Israel's flag march.

The source, who spoke on condition of anonymity, said that Hamas’ security services had received orders from the movement’s political leadership to control the situation on the ground and not allow any resistance fighters to launch rockets at Israel, even if this required arresting them.

Meanwhile, Hamas’ failure to confront Israel’s recent provocations in Jerusalem seems to be sparking a debate among its supporters in the Gaza Strip, who believe that Israel has crossed the red lines set by Hamas regarding the flag march. In May 2021, the flag march sparked an 11-day military confrontation between Israel and Hamas in the Gaza Strip.

The controversial event, also known as Jerusalem Day, marks Israel’s capture of East Jerusalem in 1967. Thousands of Israelis take part in the celebrations as they pass through Jerusalem.

Hamas leader Ismail Haniyeh had warned that the flag march would be confronted with “all means.”

Speaking at an event organized by the Hamas movement in Gaza on May 22 to mark the first anniversary of the Israeli war on Gaza, Haniyeh stressed that the “resistance in Jerusalem and the West Bank will not allow Jewish nonsense to take place in Al-Aqsa. We will confront this by all means, and we will never allow Al-Aqsa to be violated.”

Mass Israeli violations at Al-Aqsa Mosque and its courtyards in Jerusalem were registered before and during the flag march. The Israeli police deployed in Al-Aqsa courtyards prior to the parade and sealed the Al-Qibli prayer hall with iron chains to pave the way for Israeli settlers to enter Al-Aqsa. Several Palestinians were assaulted and dozens injured as they confronted the Israeli forces.

On May 29, Israel allowed 1,687 settlers to enter the courtyards of Al-Aqsa under the protection of the Israeli police. The settlers raised the Israeli flag inside Al-Aqsa, where they prayed for the first time in the history of the Palestinian-Israeli conflict.

Jews are prohibited from praying inside the mosque under understandings reached with Muslim authorities in the city.

Overall, about 50,000 Israeli settlers participated in the flag march that went through the Old City of Jerusalem and roamed the Bab al-Amoud area and the Muslim Quarter of the Old City.

A video that went viral showed settlers brandishing Israeli flags and hitting a woman before one of them pepper-sprayed her face, leading to a bigger scuffle. Many of them insulted Prophet Muhammad and chanted "Death to Arabs" as they paraded through Jerusalem.

Following the march, Taher al-Nunu, Haniyeh’s media advisor, said in a statement on May 29 that some parties — which he did not name — had contacted Haniyeh to keep the situation from spiraling out of control. He said Haniyeh informed those parties that what happened in Jerusalem and Al-Aqsa Mosque “will not be forgiven." Haniyeh “refused to give any pledges or guarantees to any party of what could be done inside occupied Palestine,” he added.

Mudallal explained that the Palestinian factions in Gaza have agreed that it is not wise to engage in a new military confrontation with Israel at this particular time. “We have dodged a well-thought-out Israeli plan to drag Gaza into a war that Israel has been preparing for for a whole month as part of the Chariots of Fire drills simulating a prolonged and intense war.”

In turn, Hamas leader Yahya Moussa told Al-Monitor, “Hamas has received extensive calls from several mediators, most notably Egypt and Qatar, asking it not to be drawn into a military confrontation in response to the recent Israeli provocations in Jerusalem.”

He explained that Hamas acquiesced to these demands, especially since the field conditions do not allow it to go into a new confrontation with Israel. “The resistance sensed an Israeli trap being orchestrated to drag it into a war for which Israel was fully prepared,” he argued. “Israel flew its military planes in the skies of Gaza throughout the flag march to target the resistance fighters in the event of rocket fire.”

Moussa added that Israel carried out a large-scale maneuver along the border with Gaza during the flag march by running empty remote-controlled buses that were traveling slowly and in open areas on the border, as bait for the resistance in order to drag it to target them. “This is what the resistance realized early on,” he affirmed.

Moussa stressed that the resistance is well aware that going toward a confrontation under these circumstances is wrong. He argued, “It is not wise to attack the enemy while it is fully prepared. But this does not mean that the resistance will not respond to the provocations of the flag march at the appropriate time and place.”

Nevertheless, a feeling of disappointment prevails over the Palestinian street over Hamas’ and the resistance’s failure to respond in a timely manner to the flag march provocations and violations.

This was fueled by dozens of statements issued by Hamas political and military leaders during the past weeks and months, pledging to prevent Israeli violations in Jerusalem, even if this required a regional war.

Quds News Network political analyst Abdel Salam al-Hayek said in a Facebook post on May 29, “Today we learned that we are not a superpower, and that our limited ability does not allow us to set very high standards. This is a good lesson. The discourse of appeal and grievance coupled with action on the ground is a thousand times better than a speech of defiance that does not measure up to action."

Meanwhile, Ayman al-Rafati, a political analyst and researcher at the Center for Regional Studies in the Gaza Strip, told Al-Monitor, “There is a popular saying that revenge is a dish better served cold, and this is what the resistance is abiding by in its response to the provocations and violations of the flag march. But this does not mean that the resistance will not respond. A response does not necessarily mean rockets launched from Gaza into Israel.”

Rafati added, “The resistance in Gaza does not operate based on emotions and reactions, but rather follows a comprehensive strategic approach for activating confrontations with Israel on several battlefronts under different tactics.”