Hamas leader Ismail Haniyeh warned Israel against holding its annual Jerusalem Day flag march in Al-Aqsa, threatening to confront it with “all means.” 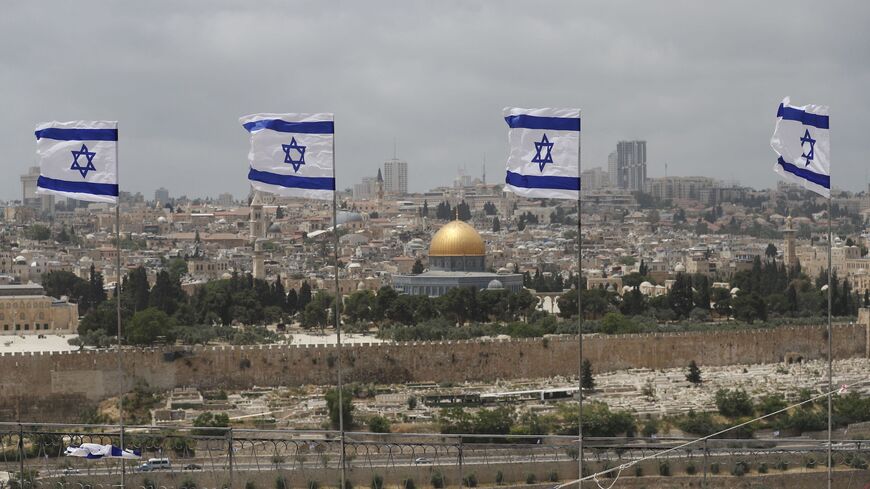 Israeli flags flutter at the military cemetery on the Mount of Olives, overlooking the Dome of the Rock mosque (background), in Jerusalem on May 4, 2022. - AHMAD GHARABLI/AFP via Getty Images

Hamas leader Ismail Haniyeh recently warned against a planned flag march on Sunday, May 29, by right-wing Israelis at Al-Aqsa Mosque in Jerusalem, stressing that should the march be held, it will be confronted with “all means.”

Speaking at an event organized by the Hamas movement in Gaza on May 22 to mark the first anniversary of the latest Israeli aggression on the coastal enclave, Haniyeh said, “There have been calls by settlers to storm Al-Aqsa and hold the flag march. I warn the enemy against committing such crimes.”

Haniyeh stressed that the “resistance in Jerusalem and the West Bank will not allow Jewish nonsense to take place in Al-Aqsa. We will confront this by all means and we will never allow Al-Aqsa to be violated.”

This year’s march is attracting exceptional clamor and media attention amid fears of full-on confrontations across the Palestinian territories in response to Israel’s approval of the event in a similar scenario to last year’s march, which was one of the reasons that provoked the 11-day war that killed 260 Palestinians and 14 Israelis.

Israeli Defense Minister Benny Gantz said on May 24 that the flag march will take place on schedule despite threats from Palestinian factions. Gantz also called on all Israeli parties to show responsibility toward this sensitive issue.

The joint operation room of the Palestinian resistance factions in Gaza pledged to strongly oppose the Israeli flag march, which is scheduled to take place on May 29.

Naji Sharab, a Palestinian writer and political analyst, told Al-Monitor, “I don’t believe a war similar to that of May 2021 would break out between Hamas and Israel [this year], as both parties are seeking to avoid such a scenario. Meanwhile, the armed factions have been playing a role to prevent the outbreak of a military confrontation.”

“Palestinian factions [in Gaza] could fire some rockets toward the areas close to the border as part of a face-saving strategy only in case Israel went through with holding the [flag march]. But it seems that a compromise between the two sides is a more plausible scenario amid regional, Egyptian, Jordanian and international efforts to prevent a war,” he added.

“There is a decision by the Israeli Supreme Court to organize the flag march, which means it is not likely to get canceled. The Israeli government will go on to organize the event according to plan. This weak, right-wing government cannot stand in the face of extremist settlers because of its absolute belief in their actions, especially when it comes to the celebration of Jerusalem Day, known as the reunification of Jerusalem,” he said.

“The government of Israeli Prime Minister Naftali Bennett is facing major crises, with some members withdrawing from the government coalition, which risks its collapse prompting early Israeli elections. This could explain why Bennett’s government does not wish to oppose the settlers, so it could have their votes [in case of elections],” Sharab added.

“The flag march may be limited to a few number of settlers, as it coincides with the visit of the Turkish foreign minister to Israel, which could calm things down," said Sharab.

“Israel views Jerusalem as a city that is completely under its sovereignty, a message that it has conveyed to various regional parties, even to the Palestinians, in the framework of its efforts to Judaize the city and consolidate its annexation,” he added.

The flag march, or Jerusalem Day, began when Israel occupied East Jerusalem in the wake of the 1967 war. Thousands of Jewish nationalists participate in the celebration every year, flocking to the city and walking through its streets and alleys to commemorate the occupation of the eastern part and the fall of the city under Israeli control.

The marchers carry Israeli flags and loudspeakers as they dance and sing to national songs. These celebrations began in 1974 but were suspended between 2010 and 2016 due to clashes with Palestinians.

On May 17, Bentzi Gopstein, head of the Lahava organization, called via social media for the Dome of the Rock to be dismantled under the pretext of inaugurating a Jewish temple in the courtyards of Al-Aqsa Mosque, while also sharing a picture of a bulldozer demolishing the mosque.