Can bitcoins save Hamas from its financial crisis?

The armed wing of Hamas in the Gaza Strip announced that it has started accepting donations in bitcoin in a new attempt to overcome its financial crises. 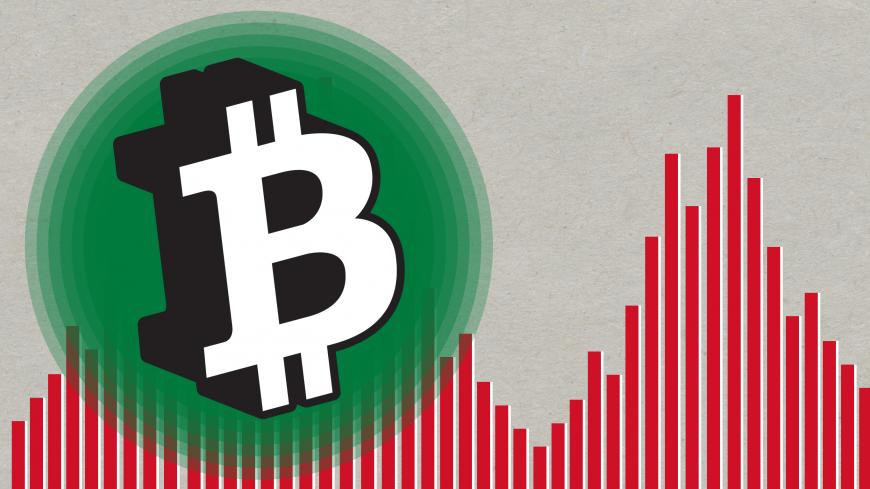 The announcement is a new attempt by the Hamas movement to challenge the Israeli and Palestinian Authority (PA) policies aimed to dry up its resources. The Hamas-run Gaza Strip has been reeling under an Israeli blockade since 2007. Ever since, Israel has been controlling security at the only commercial crossing with Gaza, the Karam Abu Salem crossing, while Egypt imposes restrictions on the Rafah crossing for the passage of people in southern Gaza.

Donations can be received through different accounts of donors on online bitcoin platforms. A new account consists of a wallet for the currency balance. One can buy currencies through a medium, a bank account or credit card, or through a donation button in the wallet. The amount is then transferred to al-Qassam Brigades’ account, which is announced daily via the messaging service Telegram.

Two days before publishing the address of al-Qassam Brigades’ bitcoin wallet that is receiving donations, its military spokesman Abu Obeida urged Hamas supporters around the world, through a post on his Telegram channel, to increase their donations.

Abu Obeida accused Israel of cutting all Hamas sources, saying, “The Zionist enemy is fighting the Palestinian resistance through an attempt to cut off aid to the resistance by all means. Lovers of the resistance all over the world, however, are combating these Zionist attempts and are looking for all possible means to aid the resistance.”

Several Hamas officials refused to comment to Al-Monitor on the bitcoin donations request. But well-informed Hamas sources indicated that several Hamas-affiliated associations in the Gaza Strip are facing a tough financial crisis. Consequently, Hamas closed many of these associations in Gaza and reduced the salaries of its employees across all sectors.

Al-Monitor learned from the employees working in Hamas-affiliated associations in Gaza that they have not been paid for months.

Al-Monitor tried to find out how many donations have been collected so far, but to no avail.

Ibrahim al-Madhoun, a political analyst close to Hamas, told Al-Monitor, “Hamas is suffering from a financial crisis due to declining regional support. Some countries supporting Hamas face political extortion and US threats, such as Qatar and Iran. Besides, donors have other financial commitments in other places in the region and have been drained by the Arab Spring uprisings.”

Through its call for bitcoin donations, Hamas will overcome many hurdles, mainly its financial crisis and the financial blockade imposed on its transactions and institutions by official banking systems around the world.

Economist and lecturer at Israa University in Gaza Amine Abu Aisha told Al-Monitor, “Bitcoins will be a new way to help Hamas receive donations, when official channels through banks fail due to strict control.”

Abu Aisha believes the dwindling Iranian support for Hamas is one of the reasons of the crisis, not to mention the general economic recession in the Gaza Strip. He added, “The cryptocurrency will allow several institutions and individuals to fund Hamas easily without facing terrorism-funding accusations. Money transfers can be done through multiple and hidden accounts that are not subject to governmental or legal control in several countries.”

Abu Aisha expects Hamas to receive millions of dollars in the coming months, especially if specific countries that he did not name made these donations.

Mustafa al-Sawaf, political analyst and former editor-in-chief of the local Felesteen newspaper, told Al-Monitor, “Bitcoins will be part of the intelligence and information warfare between Hamas and Israel. Most donations will come from the people who believe in the Palestinians’ right to resistance rather than from regimes. Arab and international regimes are generally inclined to increase normalization [with Israel] and fight Hamas. But Hamas will keep trying to find a way out of this financial crisis.”

Al-Qassam Brigades did not announce the mechanism to convert the cryptocurrency into banknotes. Egyptian financial analyst Ahmed Taleb, an independent researcher based in Cairo, told Al-Monitor over the phone, “Several mechanisms to convert the cryptocurrency exist. There are several electronic platforms outside the Palestinian territories that Hamas can transfer the money to before converting it. The good thing about the cryptocurrency is the difficulty for Israel to track it and monitor the money circulation, as this takes place outside the official banking system.”

Taleb said that Hamas most likely benefited from the experience of others like Iran and even the Islamic State (IS) in using bitcoins to fund their activities. He noted, “Hamas did not randomly fall on the cryptocurrency. It has received foreign training on using it and might have even resorted to it before.”

Al-Hassan Ali Bakr, a Palestinian economic analyst and regional director of ICM Capital, believes it is difficult for Israel to track bitcoin donations, especially as it is possible to transfer these donations from al-Qassam Brigades’ wallet account to other wallets through the blockchain technology, before converting them to other currencies.

He told Al-Monitor, “Naturally, money transfers can be carried out through money transfer companies such as MoneyGram, Western Union or bank accounts from donors or organizations.”

Notably, bitcoins have been used to fund several covert activities around the world, including money laundering. The cryptocurrency suffered huge losses in 2014, after one of the key bitcoin trading platforms was shut following a US Department of Justice decision in January 2014 to arrest several figures accused of using bitcoins to launder money.

An official Palestinian fatwa or one from Hamas related to bitcoins does not exist. However, in Egypt, Grand Imam of Al-Azhar Ahmed el-Tayeb prohibited in December 2017 the use of bitcoins in financial transactions due to the risks it carries and amid its lack of monetary cover by the Central Bank of Egypt, not to mention its potential use as a tool to fund terrorism.

Commenting on the bitcoin Sharia compliance, Madhoun said, “According to Islamic Sharia, necessity knows no law. The need here is for resolving the financial crisis, and Hamas is obliged to use bitcoins for that.”