Behind Egypt's gift to Islamic Jihad

Egypt has freed some 80 Islamic Jihad prisoners as a goodwill gesture in an effort to bring about an extended calm in Gaza and by extension prevent a conflagration in the Sinai Peninsula. 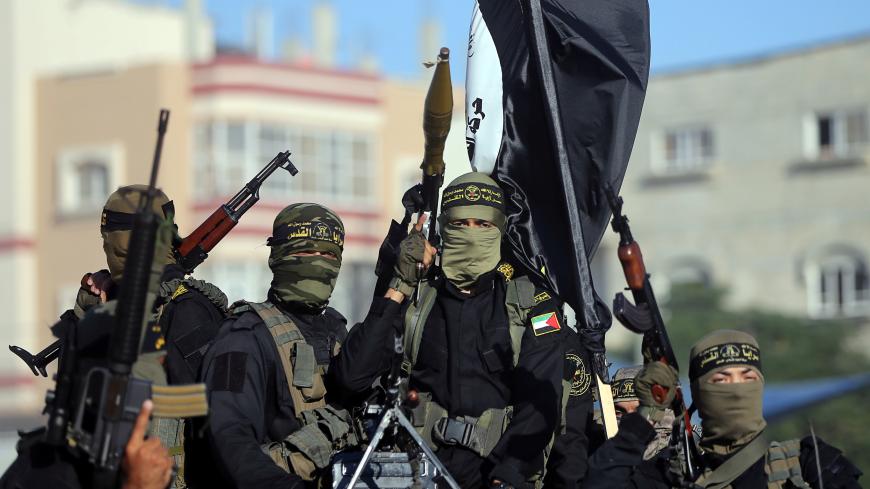 About 80 members of Palestinian Islamic Jihad were released from an Egyptian jail on Oct. 17. Some had been detained without trial, and others had been sentenced by a Cairo state security court to lengthy jail terms for membership in a terror organization and threatening Egypt’s national security.

The release followed an Oct. 14 meeting between senior Islamic Jihad officials, led by the organization’s head, Ziad Nahala, and senior Egyptian intelligence officials. Nahala, who arrived in Cairo from Beirut, was joined by leaders of Islamic Jihad’s armed wing, the Al-Quds Brigades, from Gaza, including the commander of the northern division, Bahaa Abu el-Atta, whom Israel considers a serial troublemaker. These were not the first talks between an Islamic Jihad delegation and heads of Egyptian intelligence, but in the past, they had always been joined by Hamas representatives summoned to Cairo to discuss cease-fire agreements with Israel. This was the first time that they were called to Cairo alone to resolve issues between Egypt and their organization, which is supported by Iran.

Presumably, Nahala reported on the meeting to his sponsors in Tehran, conveying to them any promises made or reached in Cairo. Nonetheless, with Gaza surrounded by Israel and Egypt, even a radical, fundamentalist organization dedicated to establishing a Muslim state throughout Palestine, from the Jordan River to the Mediterranean Sea, has to compromise and adapt its ideals to existing situations. In this regard, the group's current needs require that it not only heed Iran, which has been funded and sustained the organization for more than four decades, but it must also follow Egypt’s instruction.

According to Al-Araby al-Jadid, the Cairo talks focused on Islamic Jihad’s links with Iran and a long-term deal with Israel. The report went on to say that the meeting had been postponed for more than a month because Egypt had conditioned it on complete peace and quiet being restored on the Gaza front and on proof that the organization was not undermining implementation of the Israeli-Hamas understandings that Egypt mediated with great effort to ease the blockade against Gaza and reduce violence.

Egypt’s preconditions for the meeting indicate that it is able to dictate its wishes to the heads of Islamic Jihad in Gaza and elsewhere despite Cairo's hostility toward the movement and Egyptian leadership of the Sunni front aligned against the group’s sponsor state, Iran. Just as Islamic Jihad leaders understand that they must accept Egypt’s status as the state calling the shots in Gaza and that carries weight with both Hamas and Israel, the Egyptians understand that Islamic Jihad is a significant force in the enclave that cannot be ignored and must be negotiated with through diplomacy.

By way of comparison, Hamas, which controls Gaza, has some 30,000 fighters and 5,000 to 6,000 rockets, mostly homemade. Its long-range missiles, several dozen in number, were smuggled into Gaza with Iranian aid and funding. On the other hand, Islamic Jihad, under total Iranian control, only has some 6,000 fighters, but some 8,000 rockets. Last November, Islamic Jihad launched a new type of rocket at Ashkelon. According to the organization, the rocket carried a larger warhead than the older ones in its arsenal. The group also made no secret of the fact that it owed its success to direct support from Iran, which regards Islamic Jihad as an integral part of the Islamist revolution.

The Egyptians took all of this into account, realizing that if they want to create a basis for understandings between Israel and Gaza that results in extended calm, Islamic Jihad must be given a dignified role to play in such a deal. The Oct. 17 prisoner release was an unusual gesture given that some of those set free had been sentenced by a state security court; they were considered enemies of the Egyptian people who had plotted with extremists from radical Islamist organizations operating in the Sinai Peninsula. The gesture was actually a statement of intent by Egypt to commit Nahala to any deal and show him and his people that there was a carrot to be had, not just a stick. Nahala assumed leadership of the organization about a year ago, replacing Abdullah Ramadan, who had suffered a stroke.

Both Egypt and Israel, which regularly consult on security matters, realized that there could be no arrangement without Islamic Jihad as part of the arrangement. This is especially true given that Hamas, in a bid to avoid friction and clashes with Tehran, could give Islamic Jihad free rein, or a semblance of one, and would never conduct an all-out war against it as it does against Salafist groups in Gaza.

Against the backdrop of all of this, one can assume that Israel made it clear to Egypt that it needed to bring Islamic Jihad aboard, persuading its leaders to accept the understandings brokered with Hamas. Barring that, Israel would not follow through with its promises on easing the blockade and advancing economic development projects in Gaza for fear that Islamic Jihad members might interfere or ruin them.

Israel and Egypt engage in security coordination, which President Abdel Fattah al-Sisi publicly admitted when last visiting Washington, in January. It is thus likely that Egypt briefed Israel on its contacts with Islamic Jihad. Clearly, the Egyptians are willing to go a long way to secure an Israeli-Hamas arrangement, as evidenced by the gesture it extended to Islamic Jihad in Cairo. After the first day of talks, Egypt immediately released 55 Islamic Jihad prisoners. Most of them returned to Gaza that same day, and some left for Beirut. An additional 25 detainees were freed two days later and returned to Gaza with Islamic Jihad's delegation.

Egypt’s willingness to free prisoners who had acted against its national security should not be taken lightly. It attests to the importance Egypt attaches to the role it is playing in negotiating a deal over Gaza and to the deal itself.

Hamas’ control of Gaza is a thorn in Cairo’s side. It views the organization as a terrorist group linked to its mother movement, the Muslim Brotherhood. Meanwhile, Islamic Jihad is directly supported by Cairo's enemy, Iran. Egypt, however, recognizes the power that both organization's hold and seeks to “tame them” for its own security interests so they can reach an arrangement with Israel. For Egypt, an accommodation among Israel, Hamas and Islamic Jihad stands to restrain violence capable of trickling into the Sinai and setting off a conflagration there. Complex? Certainly.

Egypt proved this week that it knows how to dangle a carrot in front of rogue groups to bend them to its will. It did so with Hamas in the past and now with Islamic Jihad. If need be, the Egyptians also know how to carry out mass arrests of the organization’s members.