Egypt has hosted critical meetings for Hamas and now the Palestinian Islamic Jihad's political bureau both to promote its own role as mediator and as a reward for participating in cease-fire agreements. 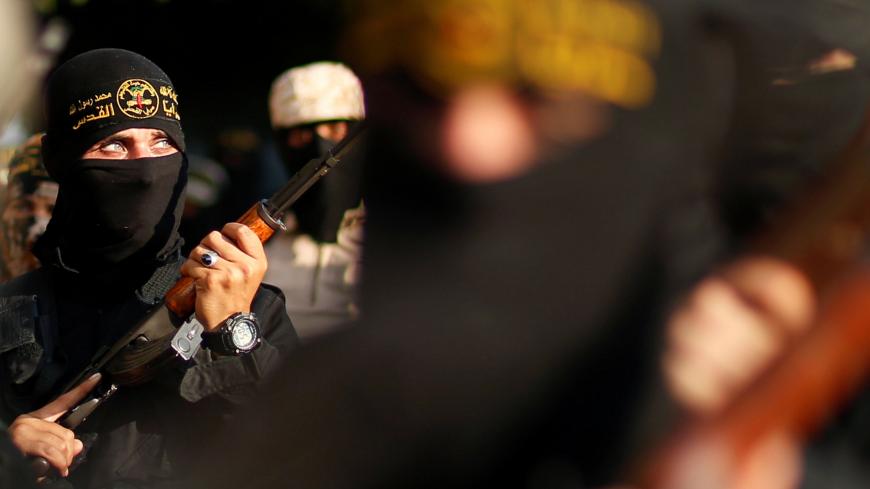 GAZA CITY, Gaza Strip — For the first time since its members were elected in September 2018, Palestinian Islamic Jihad’s political bureau held a plenary meeting in Cairo Dec. 3. The summit follows the Egypt-mediated Nov. 14 cease-fire agreement with Israel and Israeli reports that Egypt is making efforts toward a long-term truce agreement between Israel and the Gaza Strip.

Members of Islamic Jihad's political bureau arrived in Cairo Dec. 3 from the Gaza Strip and other Arab and Islamic countries, led by Islamic Jihad Secretary General Ziad al-Nakhaleh. In December 2012, Israel denied Nakhaleh entry to the Gaza Strip, when he served as deputy secretary general of the movement, threatening to assassinate him if he does.

The logistic and security difficulties make it hard for Islamic Jihad like other Palestinian organizations, especially Hamas, to convene a meeting bringing together its leadership that is based in the Palestinian territories and abroad. Most importantly is that Israel prevents these leaderships from entering the Gaza Strip, and that these organizations are unable to secure a video conference, believing that Israel is capable of intercepting and tapping it.

Islamic Jihad is not the first Palestinian movement to hold a broad-based leadership meeting in Cairo. In 2017, seeking to remain the first sponsor of the Palestinian cause in the Middle East, Egypt allowed Hamas’ political bureau to hold a plenary meeting in September for the first time since being elected in May that year.

Speaking to Al-Monitor on condition of anonymity, an Islamic Jihad official on the visit to Cairo said that Egypt’s General Intelligence Service suggested in late November that the Islamic Jihad leadership could convene a plenary meeting of its political bureau in Cairo.

The official indicated that the intelligence service pledged to ensure a comfortable and safe environment for the meeting, which discussed several regulatory matters and assessed the escalation following the Israeli assassination of Al-Quds Brigades commander Bahaa Abu el-Atta Nov. 12. In response, Islamic Jihad fired rockets at southern and central Israel before the Egypt-mediated cease-fire agreement was reached Nov. 14.

The official explained that the Islamic Jihad leadership and commanders of Al-Quds Brigades met with Egyptian intelligence officials to discuss truce efforts with Israel and conclude the agreement. He added that the group also raised the threats by Israeli Prime Minister Benjamin Netanyahu and his Defense Minister Naftali Bennett against the Gaza Strip.

Speaking to the press from Lisbon, Portugal, Dec. 5, Netanyahu affirmed that Egypt is leading intensive contacts toward a long-term truce agreement with Hamas in the Gaza Strip. Both Islamic Jihad and Hamas denied being offered any Egyptian proposal on a long-term truce with Israel Dec. 9 and 10, respectively.

Islamic Jihad stated Dec. 3 that its visit to Cairo “is part of the efforts to boost relations with our Egyptian brothers and discuss how to end the suffering of the people" as well as the release of Palestinians detained by the Egyptian security services.

Egypt-Islamic Jihad relations warmed after the election of its new leadership. Nakhaleh made several visits to Cairo, most notably on Oct. 13, which led to the Oct. 17 release of 83 Palestinians detained by the Egyptian authorities. Islamic Jihad members were among them.

Khaled Sadeq is the editor-in-chief of Istiqlal, which is close to Islamic Jihad. He told Al-Monitor that Egypt continues to build relations with the Palestinian factions in the Gaza Strip, especially with Hamas and Islamic Jihad, to resolve the humanitarian crises that have been wreaking havoc in the Gaza Strip since the Israeli siege was imposed 13 years ago.

He explained that Egypt, which considers itself an essential mediator between Palestinians and Israel in the truce talks, seeks to spare the Gaza Strip from a new military confrontation. The danger is high as Netanyahu attempts to resolve his political crisis after failing to form a government at the expense of Palestinian bloodshed.

Despite Egypt's assistance, Islamic Jihad is unlikely to consent to a long-truce truce with Israel, as it holds that its duty is to resist Israel's occupation of Palestinian territory.