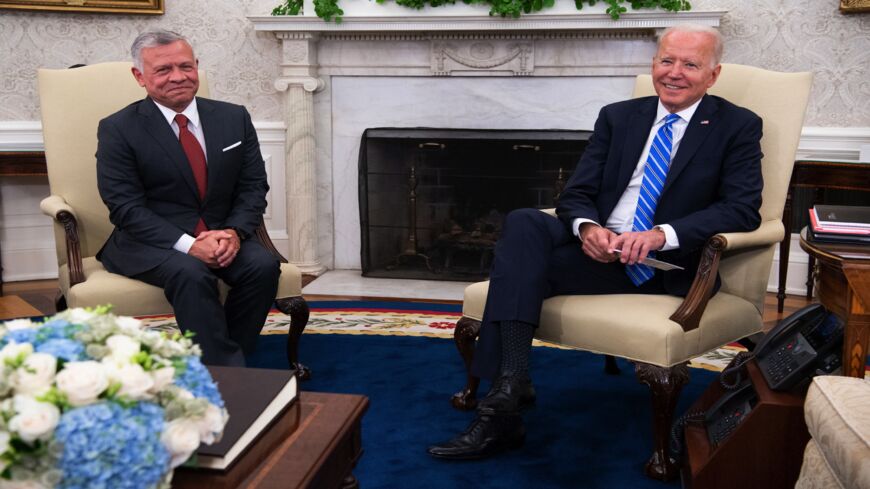 US President Joe Biden (R) and Jordan's King Abdullah II smile during a meeting in the Oval Office of the White House in Washington, DC, on July 19, 2021. - SAUL LOEB/AFP via Getty Images

The White House meeting this week between US President Joe Biden and Jordan’s King Abdullah II reaffirmed “the enduring strength” of a partnership that has been, and remains, a pillar of US Middle East diplomacy and strategy. The personal commitment of Biden to the US-Jordan partnership is also critical to a turnaround in Israel-Jordan relations, which had hit “rock-bottom” under former Israeli Prime Minister Benjamin Netanyahu.

US-Jordan reset key to US strategy. King Abdullah is the first Arab leader to meet with Biden. The signal to the region, and to Israel, is that Jordan is back as a full partner in US regional strategy, including on the Palestinian issue. US-Jordan ties took a hit under US President Donald Trump. The perception was that the Trump administration’s close ties with Bibi and the Gulf came at the expense of Jordan. Amman, for example, was not a partner to the Trump administration’s “Peace to Prosperity” plan to resolve the Israeli-Palestinian conflict.

Now the hard part: the Israel reset. Israel-Jordan ties deteriorated under Netanyahu, as Osama Al Sharif explains. Netanyahu’s opposition to a two-state solution, his refusal to halt illegal settlements in the West Bank and East Jerusalem, and his willful disregard of the Arab Peace Plan of 2002, which offers normalization following an Israeli-Palestinian peace deal, sunk Israel-Jordan ties to their lowest point in decades.

Israel now ‘on a mission.’ Israeli Prime Minister Naftali Bennett met with the king in Amman earlier this month and closed an overdue deal on water sharing. Foreign Minister and Alternative Prime Minister Yair Lapid made the trek to Jordan soon after. Ben Caspit reports that “Israel is planning a long list of agreements with the kingdom to rehabilitate the relationship” and restore several aspects of cooperation, including additional goodwill gestures, including regarding water “on the condition that Jordan lets Israeli farmers cultivate the borderlands that Israel handed back to Jordan in 2019.”

Biden is key. Israel-Jordan ties are as much about policies as personalities. The absence of Netanyahu removes some, but not all, of the potential friction. Bennett’s approach on a two-state solution and settlements tracks with Bibi. As Al Sharif writes, there is a perception in Jordan that Israel ties could again spiral to crisis at any moment, such as over a confrontation in East Jerusalem or the Al-Aqsa Mosque. The Israel-Jordan Peace Agreement of 1994, as Caspit writes, can’t be overstated as a pillar for Israeli and regional security. That view is back, and back big, in Washington, and has renewed traction again in Jerusalem.

Hopes for a revived Iranian nuclear agreement were further dashed this week when an Iranian government spokesperson said the country's Supreme National Security Council believes the framework agreed to in Vienna is incompatible with a law passed by the hard-line Iranian parliament last year. With nuclear talks in the Austrian capital on hold, outgoing Iranian Foreign Minister Mohammad Javad Zarif has issued a report outlining how to get the discussions back on track, which he writes will require Iran’s future negotiating team to abandon their maximalist bargaining position.

“All the incoming administration of President-elect Ebrahim Raisi needs to do is follow Zarif’s advice to adjust maximalist positions,” writes Mark Fitzpatrick. “This is not so easy, of course.” Tehran appears unwilling to budge on its demand that all Donald Trump-era sanctions must be lifted and that the sanctions’ removal must be verified before Iran resumes compliance with the nuclear accord. Notably, Zarif’s report concedes that under a possible deal some non-nuclear designations would remain in place.

New Israeli Prime Minister Naftali Bennett has instructed his aides to compile an updated file on Ebrahim Raisi, which Bennett intends to present to the Biden administration when he visits Washington next month. Human rights groups have documented how Raisi, who is under US sanctions, played a role in the mass executions of Iranian political prisoners in 1988. Ben Caspit writes that Israel has a tranche of evidence “proving that Raisi’s reputation as the ‘Hangman from Tehran’ was justly deserved.” One of Bennett’s closest aides told Al-Monitor that the Israeli government has obtained testimony from former inmates at Karaj prison recounting how Iran’s president-elect would celebrate each execution with cake.

Saudi Arabia is now backing Egypt and Sudan in the Grand Ethiopian Renaissance Dam (GERD) dispute, putting at risk its bilateral relationship with Ethiopia. Samuel Ramani explains that Riyadh’s support for the downstream countries is consistent with Saudi Arabia’s broader push for Arab solidarity during regional security crises. Not to mention, playing a more assertive role in the dam dispute could bolster the Gulf country’s role as a security guarantor in the Red Sea. Ramani writes that Saudi Arabia and Ethiopia have also clashed over the kingdom’s expulsion of Ethiopian migrant workers, but the two countries will likely compartmentalize their disagreements in order to keep up cooperation in other areas.

Egypt and Ethiopia are not only fighting over water flows from the Blue Nile, but also over electricity generated from the river’s giant hydropower dam. Ethiopia, which aims to begin exporting electricity from the GERD in 2023, has reportedly lined up a number of future African customers. For its part, Egypt is trying to counter those deals by supplying electricity exports and investments to power-scare countries like Burundi, Djibouti and Tanzania. George Mikhail has more on the electricity standoff between Cairo and Addis Ababa. Plus, Hagar Hosny details Egypt’s plans to build more nuclear power stations.

Anton Mardasov takes a look at the many controversies surrounding Russia's Sputnik V coronavirus vaccine, including Moscow’s decision to secretly award exclusive resale rights to an Emirati company that overcharged government buyers for the vaccine doses. Meanwhile, Iran’s top pandemic official has partially blamed the country’s shortage of vaccines on Russia failing to honor its Sputnik commitments. Questions also remain over the delivery of vaccines to Russian ally Syria, which reportedly agreed to release a detained Israeli civilian in return for Israel funding a batch of the Russian-made vaccines sent to Damascus.

Egypt is gearing up for another pharaonic-themed parade, this time in Luxor. Salwa Samir writes that after the success of the country’s 3-mile royal mummy procession in April, the Egyptian government is now planning a parade to mark the completed restoration of the 2,700-meter-long Avenue of Sphinxes that connects the Luxor and Karnak temples in southern Egypt. The planned spectacle will showcase statues representing the ancient gods and feature many of the rituals performed during the ancient Egyptian festival of Opet.

Al-Monitor columnist Ali Hashem says restoring the nuclear deal won’t be a top priority for incoming Iranian President Ebrahim Raisi when he takes office next month. Much depends on who the ultraconservative cleric appoints to the Foreign Ministry and National Security Council, but Hashem says the new government won’t be willing to make the concessions alluded to by Mohammad Javad Zarif.

“The rules of the game are changing,” Hashem says. “What the establishment wants is different from what [Hassan] Rouhani’s government wanted.” Listen to the podcast for more on what Raisi means for the nuclear talks, as well Hashem’s take on the rise of Hezbollahis in Iran.