Al-Monitor reporting shows the increased risks and relevance of water security for Egypt, Sudan and Ethiopia; Iran and Iraq; and Israel and Jordan. 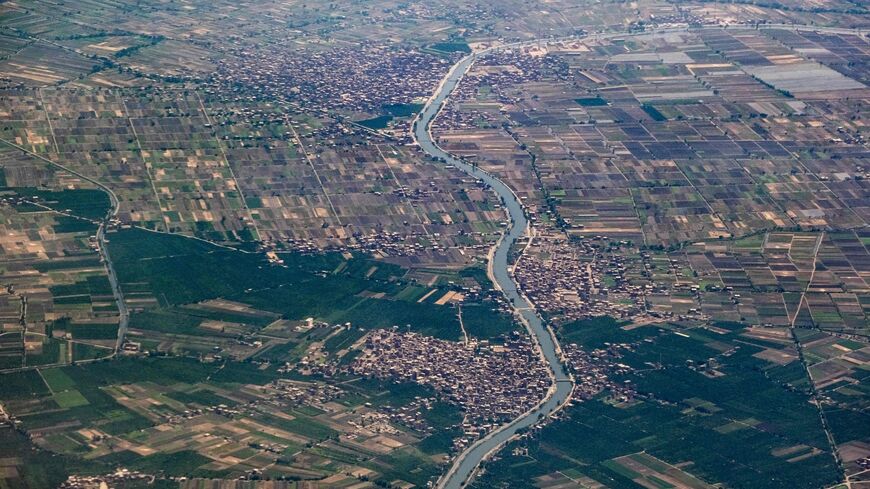 Is Egyptian agriculture at risk due to the lack of an agreement on the operation of the Grand Ethiopian Renaissance Dam? Here, an aerial view is seen of the Muweis canal of the Nile River and alongside it the villages of (top to bottom) Bani Ishbil, Kafr al-Jirayah and Bandaf in Sharqiyah province of Egypt's fertile northern Nile delta agricultural region, May 28, 2021. - AMIR MAKAR/AFP via Getty Images

The disruption of water supply has long been a potential catalyst for conflict or instability in the arid Middle East. But it’s never been as prominent a risk as it is now.

Ethiopia announced July 19 that it had completed this year's filling of the Grand Ethiopian Renaissance Dam (GERD), which it is building on the Blue Nile, the main tributary of the Nile River, which provides Egypt with over 90% of its water needs.

Egypt is weighing its next diplomatic steps, as Baher Al-Kady reports. On July 8, Egyptian Foreign Minister Sameh Shoukry told the UN Security Council that the GERD presents an "existential threat" and that the effect of the potential disruption of water flow to Egypt would be like a "malignant plague."

Tunisia has drafted a resolution to back Egypt’s bid for the council to formally weigh in on behalf of an internationally mediated agreement for the management of the Nile water flows. That resolution is, forgive the metaphor, dead in the water.

"Although the council has acknowledged the severity of the issue with a second meeting in two years on the dispute," we wrote here, "a resolution is still a tough sell. Council members remain uneasy about the precedent of a resolution on 'water issues.'"

Egyptian President Abdel Fattah al-Sisi, speaking July 15, said any reduction of Egypt’s water supply is a red line that “cannot be crossed,” adding, “Before anything happens to Egypt, the army and I would have to be gone.”

Disappointed by Moscow’s neutral stance at the Security Council, Cairo is reaching out to China to help break the deadlock, as Amr Eman reports. While Beijing has never been a major diplomatic force in the region, it does have close ties with Addis Ababa. China also is heavily invested in Egypt as part of its Belt and Road Initiative, "as a gateway for Chinese goods into markets on the African continent," Eman writes.

"China is … one of Egypt's largest trading partners, with huge investments in Egypt," Eman continues. "It plans to establish an industrial zone in the Suez Canal region. Chinese companies are also participating in the construction of the New Administrative Capital, a megacity being built on the outskirts of Cairo."

Egypt also is getting a boost from Saudi Arabia, which enjoys good ties with Ethiopia. The kingdom’s tilt toward Egypt in the GERD dispute can be explained by a more assertive posture in the Arab League, which is 100% behind Egypt, and in Red Sea security, as Samuel Ramani explains.

Another interesting angle on the dispute revolves around a potential mediation role for Israel, as Mohamed Saied reports, which also enjoys strong ties with Ethiopia, in addition to its relationship with Egypt. Israel is back as an "observer" to the African Union (AU), as Rina Bassist reports, and eager to press ahead with more normalization agreements on the continent.

The Biden administration, after hearing out Egypt at the Security Council, is throwing its weight behind AU mediation, which for the past year has languished. US Secretary of State Antony Blinken spoke July 20 with Democratic Republic of the Congo President Felix Tshisekedi, who is current chair of the AU, and stressed the importance of mediation on the GERD.

Meanwhile, Egypt is engaged in its own "power" diplomacy with Djibouti, Tanzania and Burundi to counter Ethiopia's plans to use the GERD to create and export hydropower to African countries, as George Mikhail reports, and looks to build its own civilian nuclear power capacity, as Hagar Hosny writes.

Water is creating tensions elsewhere, too. Iran apparently shut down the internet in restive Khuzestan province, where protests have been occurring over the lack of clean drinking water. Experts say the main cause of the water problems in the southwestern province is unusually low water levels due to drought. Mismanagement of water resources may have also played a role. Activists said security forces killed three protesters.

Iran’s water crisis is not limited to Khuzestan province, but that is where it is more acutely felt, and it is exacerbated by Iran’s energy crisis. Worn down by sanctions, disrepair and mismanagement, the energy and water sectors have been operating erratically, leading to additional protests in Iran.

The fallout is regional. Iraq relies on Iran for a large share of its electricity and power needs.

And in Iraq, too, water supplies are at risk. The Iraqi Kurdistan Regional Government has called for citizens to ration water due to the decline in groundwater levels because of lack of rain and this year’s drought.

Iraq’s Minister of Water Resources Mahdi Rashid al-Hamdani blames other countries, too. He said shortages result from Iran’s diversion of water from the Karun River to the Gulf rather than the Shatt al-Arab, and Turkey’s failure to comply with its water agreements. Iraq’s primary sources of water, the Tigris and Euphrates, originate in Turkey.

The new Israeli government of Prime Minister Naftali Bennett and alternate prime minister and Foreign Minister Yair Lapid has given priority to a reset in ties with Jordan. And at the top of the reset agenda was water.

Former Israeli Prime Minister Benjamin Netanyahu let languish the 2015 the Red-Dead agreement signed with Jordan under the auspices of the World Bank and with big-time support from the United States and international organizations.

The project called for a "giant water pipeline between the Red Sea and the far lower Dead Sea, along which water desalination facilities would be built to benefit both sides of the arid, empty Arava Desert they share, with the remaining water and brine to flow down and replenish the shrinking Dead Sea," writes Ben Caspit. "In return for Jordanian cooperation on this project, Israel committed to supply Jordan with an additional 50 million cubic meters of water produced at an additional desalination plant to the north from which water would flow to the Sea of Galilee and from there to Jordan."

The breakdown in negotiations on the pipeline is blamed, in part, for exacerbating Jordan’s water crisis, writes Osama Al Sharif.

The first item of business for Bennett, on his "secret" mission to Amman earlier this month, was to close the deal.

"According to diplomatic sources," Caspit continues, "Israel is planning a long list of agreements with the kingdom to rehabilitate the relationship and restore several aspects of cooperation, including additional goodwill gestures. Israel is willing to further upgrade the water supply that is crucial for the monarchy’s stability on the condition that Jordan lets Israeli farmers cultivate the border lands that Israel handed back to Jordan in 2019."

After meeting with King Abdullah II on July 20, US President Joe Biden expressed US support for improved Jordan-Israel ties and cited the agreement to provide fresh water to Jordan as an example.