Egypt has turned to China, hoping its leverage will help sway Ethiopia to negotiate on a deal over the dam’s water management. 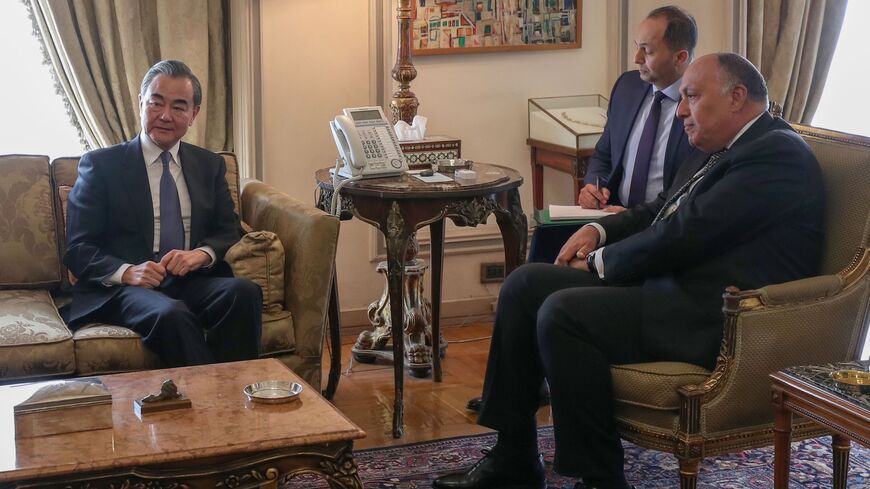 CAIRO — Egypt is following a new policy course on the Grand Ethiopian Renaissance Dam (GERD) in latest bid to get Ethiopia to agree to sign a legally binding deal on the dam. Cairo is approaching Ethiopia's closest allies, starting with China.

During a meeting with Chinese Foreign Minister Wang Yi in the northwestern coastal city of Alamein on July 18, Egyptian President Abdel Fattah al-Sisi said, "Egypt is unwavering in its determination to protect its historical right to its water share from the Nile."

Ethiopia's second-stage filling of the dam's reservoir is close to completion.

Egypt, which took the dam issue to the United Nations Security Council on July 8, objected to the second-stage filling of the dam and accused Ethiopia of acting unilaterally and overlooking Egyptian concerns about the effects the disruption in the flow of the Nile would have on its people.

There is deep concern in Cairo that the filling and the operation of the Ethiopian dam will deprive water-poor Egypt of a significant part of its annual share from the Nile, its primary source of water.

Political observers in Egypt say that China could play an important role in settling the crisis over the Ethiopian dam.

"However, Chinese intervention can come in the form of advice, not pressure on the Ethiopian government, with the aim of ending the deadlock in dam negotiations," Mustafa Kamel al-Sayed, a professor of political science at Cairo University, told Al-Monitor.

China invests heavily in Ethiopia. It considers the East African country a hub for its Belt and Road Initiative, which aims to expand China's sphere of influence by financing infrastructure throughout the global south.

Ethiopia imports most of its goods from China. By June 2020, Chinese companies had formulated plans to spend $2.7 billion in Ethiopia through some 1,500 initiatives. Ethiopia owes $16 billion to Chinese lenders, almost half of the East African country's foreign debts.

China and Ethiopia established diplomatic ties in 1970. Over these 50 years, the two countries' relations transformed massively. In 2017, they elevated their relations to a comprehensive strategic partnership. Two Chinese companies are now participating in the construction of GERD, having been contracted by the Ethiopian government in February 2019.

In 2019, China was the largest foreign direct investment source for Ethiopia, according to the 2020 report of the United Nations Conference on Trade and Development. In the same year, China accounted for almost 60% of newly approved foreign projects in the East African country. In 2020, trade between the two countries amounted to $14.56 billion.

China is also one of Egypt's largest trading partners, with huge investments in Egypt. It plans to establish an industrial zone in the Suez Canal region. Chinese companies are also participating in the construction of the New Administrative Capital, a megacity being built on the outskirts of Cairo.

Egypt is also an important country for the Belt and Road Initiative, as a gateway for Chinese goods into markets on the African continent.

"Egypt uses the diplomatic tools at its disposal to the utmost," Aida Nacif, a member of the Committee on Foreign Relations in the Egyptian Senate, told Al-Monitor. "Beijing can play an important role in settling the dam crisis in the coming period."

Nevertheless, Chine's longstanding noninterference policy threatens to impede it from playing an active role in the Nile dam dispute, observers say. As the conflict over the dam has worsened over the years, Beijing has done little to bring parties to the conflict together.

"China could have played a more decisive role in the dispute over the Ethiopian dam if it had wanted to," al-Sayed said. "It could have suspended the supply of the necessary equipment for the power stations of the dam."

Ethiopia is beset by conflict already, threatening Chinese investments. In the northern Tigray region, intense fighting is raging between government forces and its affiliated militias and the local forces.

China does not want to see Ethiopia, which together with Eritrea and Djibouti is central to Chinese investments and economic aspirations in Africa, involved in a military confrontation with another country.

China has set aside its noninterference policy on occasion to protect its investments or aid its allies, such as in the war between Sudan and South Sudan. Beijing was instrumental in bringing the conflict between the two sides to an end in 2015.

Egypt could approach Ethiopia's other allies to pressure Addis Ababa to sign a deal after Russia disappointed Cairo during the latest Security Council session on the dam.

Concerns for armed conflict are rising amid talk in Cairo about the need for military intervention to stop Ethiopia from disrupting Egypt's resources.

Sisi warned July 15, the second time in four months, against harming his country's water rights. "Egypt has the political tools and military and economic power to determine its own fate and enforce its own will," Sisi told a cheering congregation of citizens at Cairo Stadium. "Egypt's national security is a red line."

During his meeting with Sisi, Wang said his country recognizes the extreme importance of the Nile for Egypt. China, he added, will remain invested in finding a solution to this issue that serves the interests of all parties.