China expands its influence in Horn of Africa, overlooks dispute over Nile dam

The agenda of the first African tour made by the newly appointed Chinese envoy to the Horn of Africa did not tackle the controversial GERD dispute between Ethiopia, Sudan and Egypt. 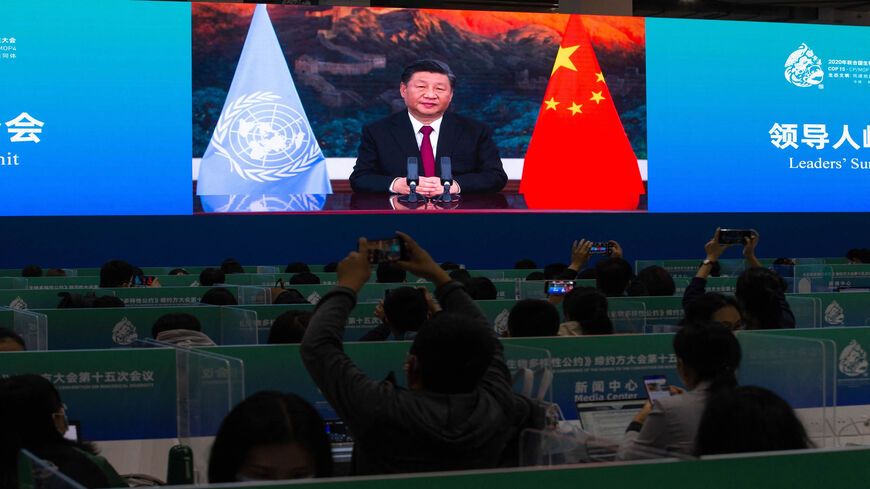 As China presents itself as a supporter of stability in the Horn of Africa, the controversial Grand Ethiopian Renaissance Dam (GERD) dispute between Ethiopia, Egypt and Sudan failed to make it to the agenda of the newly appointed Chinese envoy during his first tour of the region.

Xue Bing, China’s special envoy for the Horn of Africa, landed in Ethiopia as part of an African tour that he started March 12.

On March 14, Xue held talks with Ethiopian Deputy Prime Minister and Minister of Foreign Affairs Demeke Mekonnen, during which they discussed relations between the two countries and joint projects.

In February, China appointed Xue to support efforts aimed at overcoming security challenges in the conflict-ridden region, including in Ethiopia, Eritrea and Somalia, as Beijing is seeking to preserve its interests and enhance its geopolitical influence at the expense of the United States, its competitor in the region.

During his meeting with Xue, Mekonnen praised his country’s long-term relations with China.

In a statement by the Ethiopian Foreign Ministry, Mekonnen lauded “China's support in international fora, which has helped Ethiopia thwart threats to its sovereignty and territorial integrity.”

China, along with Russia, has repeatedly used its veto power at the United Nations Security Council to prevent any condemnation of the violations committed by the Ethiopian government against the rebels in the northern region of Tigray, as Beijing considers the issue to be a domestic affair and not a UN matter.

China also opposed US sanctions on Ethiopia and Eritrea, which are accused of committing rape and brutal massacres in Tigray.

Its support has not been political only, as it has provided military support as well. According to the website oryxspioenkop for security and defense affairs, China supported the government of Abiy Ahmed with drones in the war.

As for the GERD dispute, Mekonnen said during his meeting with Xue that China’s constructive stance on the issue of the dam in support of the principle of “African solution to African problems” is commendable.

The giant $5 billion hydroelectric dam project that Addis Ababa is building on the Blue Nile, the main tributary of the Nile River, has raised tensions with Egypt and Sudan, which fear it will limit their supplies of vital Nile waters.

For more than a decade, Egypt and Sudan have failed to persuade Ethiopia to agree to a legal agreement regulating the filling and operation of the dam.

In the summer of last year, tensions increased when Ethiopia announced the completion of the second filling of the dam reservoir despite Egypt and Sudan’s rejection of the unilateral decision.

This Ethiopian move came months after a diplomatic upheaval that culminated in repeated Egyptian statements that implied the possibility of military action against the dam in the event Addis Ababa embarks on such a step.

In the summer of 2021, Cairo and Khartoum managed to push toward adding the GERD issue to the agenda of the UN Security Council despite Ethiopia's rejection of this step. Subsequently, the Security Council issued a presidential statement calling on the three countries to continue their talks under the auspices of the African Union, which has since sought to resume negotiations, to no avail.

Meanwhile, China's position on the dam issue at the Security Council meeting did not live up to the expectations of Egypt’s decision-makers.

China’s permanent representative to the UN Zhang Jun said in a speech at the Security Council meeting that his country believes that through joint efforts the GERD can become a tripartite development project to promote win-win cooperation. This position was considered supportive of the Ethiopian point of view on the issue.

In his statements after the session, Egyptian Foreign Minister Sameh Shoukry said that the position of states in the council is subject to political considerations, alignments and intertwining interests.

Egyptian writer and Sen. Emad al-Din Hussein described China’s position as very negative. In an article titled “Those who let us down at the Security Council,” Hussein called on the Egyptian administration to reevaluate its relations with all countries, including China, on the basis of these countries’ supportive or opposing position on the dam issue.

Kjetil Tronvoll, professor of peace and conflict studies at Oslo New University College, told Al-Monitor that China's noninterference policy is a key guiding principle, so they try to shy away from the domestic disputes and issues of tension, such as the GERD or the Tigray war.

However, Tronvoll sees that this should not necessarily be looked upon with concern by Egypt or Sudan; China needs also to maintain relations with them.

China has close political and economic relations with the three countries, but it has yet to engage or present itself as a mediator to try to settle the conflict, which may erupt at any moment, and its repercussions may affect the already volatile region.

Joshua Meservey, senior policy analyst for Africa and the Middle East at the Heritage Foundation, told Al-Monitor that China understands what a contentious issue the dam is, but wishes to avoid being drawn into the dispute between the parties with which it has close relations.

"China likely wishes for the dispute to end but prefers that other countries take the risks involved in mediation, while it reaps the benefits cost-free," Meservey said.

He noted that Ethiopia is one of the largest recipients of Chinese loans and FDI in Africa, one of China's largest African trade partners. “Beijing does not want to endanger any of that,” he added.

Chinese companies are heavily investing in Ethiopia’s textile, pharmaceutical, construction and manufacturing industries. China also views Ethiopia as a hub for the Belt and Road Initiative, which aims to expand its commercial influence into the Horn of Africa.

China’s loans to Ethiopia totaled more than $13 billion between 2000 and 2019. Beijing also holds more than 50% of Addis Ababa’s foreign debt.

Of note, China contributed to the financing of the GERD project, as it provided a loan of about $1 billion to help build transmission lines to and from Addis Ababa to provide the services necessary for the construction of the dam. Beijing is also investing $1.8 billion to finance the expansion of Ethiopia’s electricity grid. Two Chinese companies are involved in building the dam.

But China has huge investments in Egypt and Sudan as well.

In Egypt, Chinese banks are involved in financing the new administrative capital, which is being built outside Cairo, with the Chinese government’s Construction Engineering Corporation being one of the main contractors.

The volume of Chinese direct investments in Egypt amounted to $190 million, while the volume of trade exchange amounted to $14.5 billion in 2020. Egypt is also an important country for the Chinese Belt and Road Initiative and serves as a gateway for Chinese goods to markets in the African continent.

Meanwhile, China has for years been Khartoum’s largest trading partner, and Sudan was one of the first countries to sign the Belt and Road Agreement, which Beijing considers important given its strategic ports on the Red Sea.

The volume of trade between the two countries amounted to $2.8 billion in 2017, accounting for 21% of Sudan’s total imports and exports. Chinese investments in Sudan are spread across the oil, infrastructure, agriculture and mining sectors.

John Calabrese, director of the Middle East-Asia Project at the Middle East Institute, told Al-Monitor that the GERD crisis vividly illustrates the dilemmas that China faces in expanding relations with regional countries that are in conflict with each other.

He said, “To date, China's standard diplomatic response to such conflicts has been to hew closely to its foundational principles of 'peaceful coexistence,' strive to maintain strict neutrality, call for restraint, encourage a negotiated settlement, keep open channels of communication with all sides and occasionally offer bland peace proposals.”

An Egyptian official told Al-Monitor that his country is still counting on its international partners, including China, to play a greater role in settling the dam dispute.

Egypt and Sudan hope to resume negotiations that have been frozen for nearly a year with Ethiopia, before Addis Ababa begins filling the dam’s reservoir for the third time in the upcoming rainy season in June-September.

As for whether Beijing can play a role in resolving the Nile issue, Calabrese pointed out this would depend on whether it wants to and whether all the disputants would welcome Chinese mediation. However, he said, “At the present time, I do not see either of those conditions operative.”