US Secretary of State Antony Blinken referred to Jordan as a key partner and friend in his recent visit to Amman, yet the Hashemite kingdom is facing a new geopolitical reality making it’s diplomatic role in Mideast peace more challenging. 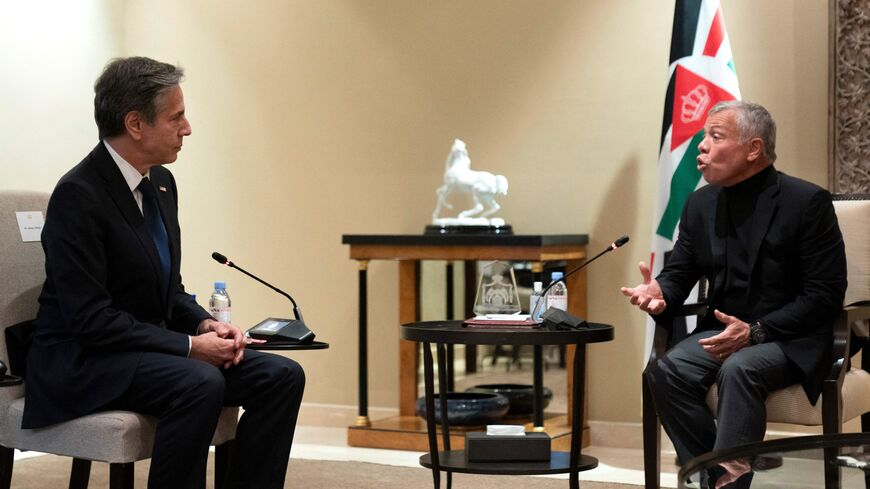 US Secretary of State Antony Blinken (L) meets with Jordanian King Abdullah II at the Beit Al Urdun Palace in the Jordanian capital, Amman, on May 26, 2021. Blinken landed in Jordan on the last leg of a Mideast tour aimed to shoring up an Egypt-brokered cease-fire between Israel and Palestinian militants in Gaza. - ALEX BRANDON/POOL/AFP via Getty Images

Jordan has been stepping up its regional diplomacy in last 48 hours after receiving both US Secretary of State Antony Blinken and Abu Dhabi’s de facto ruler, Crown Prince Mohammed Bin Zayed, in Amman.

The meetings follow the ceasefire announced last week to end the exchange between Israel and Hamas, and Blinken’s earlier stops in Jerusalem, Ramallah and Cairo this this week.

Jordanians and their lawmakers came out strong on behalf of the Palestinians during the crisis, demanding that the government expel the Israeli ambassador and recall Jordan's envoy. But while the government promised to “study” the parliamentary memorandum urging these actions, nothing much happened.

There were however carefully picked words of denunciation and warnings from King Abdullah II and Foreign Minister Ayman al-Safadi throughout the crisis about Israel’s assault on the Al-Aqsa Mosque and its efforts to evict residents of the Sheikh Jarrah neighborhood in occupied East Jerusalem.

Roughly half of Jordan’s 10 million people are Palestinians.

On May 26, Blinken made Amman his last stop as part of a regional visit that aimed at consolidating the cease-fire between Israel and Gaza and supporting Abbas. Blinken met Abdullah and later praised the king at a press conference, saying that Abdullah's leadership was crucial and that “as it always has been in different issues, his role was essential in reaching a cease-fire in Gaza.”

The State Department said that Blinken emphasized that the US has "respect for the special role of Jordan in holy sites in Jerusalem and restated our commitment to the historic status quo at the holy sites."

It was not until May 20, a day before the cease-fire went into effect, that Vice President Kamala Harris called Abdullah to "reaffirm the United States’ strong support for Jordan and the historic relationship between the two countries" and discuss diplomatic efforts to deescalate the conflict.

Despite the diplomatic flurry, Jordan was seen by some as on the sidelines as US President Joe Biden conducted phone diplomacy by calling Egyptian President Abdel Fattah al-Sisi, Palestinian President Mahmoud Abbas and Israeli Prime Minister Benjamin Netanyahu in order to reach a cease-fire.

Some political analysts in Jordan say they believe Amman's reaction to the 11-day war between Israel and militant Palestinian factions could have been stronger, given the daily protests in front of the Israeli Embassy in Amman as hundreds poured to the border with the West Bank in solidarity with the Palestinians.

As provocative Israeli actions took place before, during and after the military showdown, Safadi threatened that Jerusalem “was a red line” and that “Israel was playing with fire” but observers in Jordan shared the impression that Jordan’s hands were tied and that it had little room for maneuver. By the end of the day, it was Egypt — and Qatar — that emerged as holding the keys to a breakthrough.

With King Abdullah's relationship with Netanyahu at a historic low, Jordan had no influence with the Israeli government. In addition, for years Jordan had placed its bets on the unpopular and corrupt Palestinian Authority (PA) and its octogenarian leader Abbas, who had no sway over Gaza and the two main militant factions — Hamas and Islamic Jihad — that were engaged in hostilities with Israel.

As both sides exchanged blows — with Gaza firing missiles at Israeli cities while Israel rained bombs on the stricken enclave — Jordan called for the cessation of hostilities and  worked the phones with Ramallah and Cairo to coordinate diplomatic moves. Because of Jordan’s strained ties with both Israel and Hamas, Jordan’s options were limited, and Cairo took the diplomatic lead.

Local critics of Amman's official response point to the unique relationship between Jordan and Palestine that goes back to the 1920s when the emirate of Trans-Jordan was founded and the Hashemite custodianship of Al-Aqsa was enshrined. It was in the June 1967 war that Jordan lost the West Bank, including East Jerusalem with its Old City. From 1948 to 1967, Jordan received tens of thousands of displaced Palestinians and refugees. Today, Jordan hosts the largest number of Palestinian refugees, 2 million strong.

Abdullah was the first to oppose President Donald Trump’s so-called “deal of the century,” risking the decades-old alliance between the kingdom and the United States. The king had repeatedly warned that the two-state solution is key to the national security interests of Jordan as it derails Israeli far-right claims that Jordan is a de facto Palestinian state.

Writing in the Qatari-based New Arab news site, former minister and Jordanian political analyst Mohammad Abu Rumman warned May 23 that Jordan is facing a new geopolitical reality. “There is no doubt that the recent war has upset the status quo at all levels and that the Palestinian cause has resurfaced as a central issue both regionally and internationally and that the fate of Jerusalem could trigger a regional eruption if Israeli policies continue,” he wrote.

Abu Rumman pointed to a closed workshop held May 25 by the Politics and Society Institute in Amman with a group of Jordanian politicians and experts to discuss developments in the occupied territories and their regional implications and assess the Jordanian position during the events. He said the participants agreed there was a new regional geopolitical reality that necessitates that Jordan review its ties with Turkey, Iran, Syria and Iraq to preserve Jordan’s national interests. Abu Rumman added that if Egypt looks at Gaza as an extension of its national security, then Jordan should view the West Bank in the same way, especially when it comes to Jerusalem. “The fate of both is not an extension of Jordan’s national security but an essential part of it,” he said.

Mohammad al-Tall, a pro-government journalist and former editor of Ad-Dustour daily, in his column on a local website May 23, said, “Jordan was always the main player when it came to the Palestinian issue but in the latest crisis it gave up that role to more than one Arab party and relinquished important cards in its possession. … We expelled Hamas 20 years ago only to find out that it is now a major broker in the Palestine question.” He added, “Any development, in that case, affects our national security because of the geographical and demographic ties between us and the Palestinians. ... We need to rearrange our cards because our national security should always come first.”

This article has been revised and updated by Al-Monitor staff based upon recent media reports.