Secretary of State Antony Blinken will visit Jerusalem, Ramallah, Cairo and Amman this week for discussions on maintaining the fragile cease-fire between Israel and Hamas. 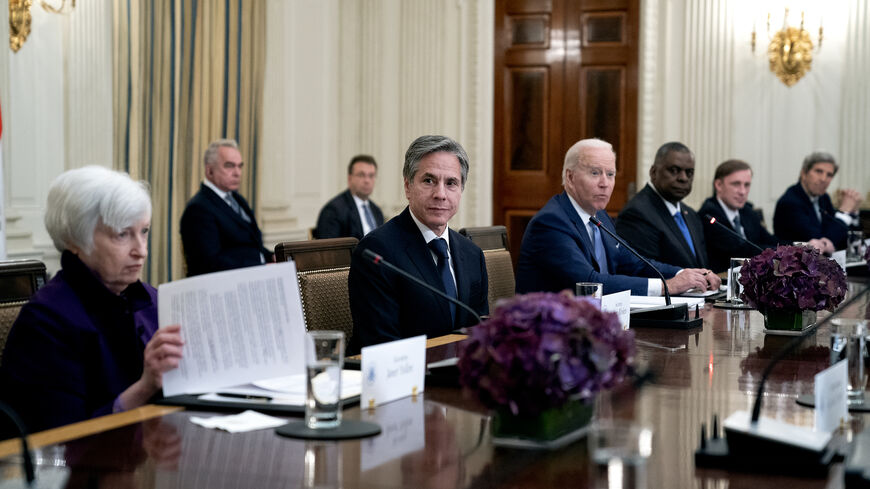 US President Joe Biden and President Moon Jae-in of the Republic of Korea participate in an expanded bilateral meeting in the State Dining Room of the White House on May 21, 2021. - Stefani Reynolds/Getty Images

US Secretary of State Antony Blinken is headed to the Middle East to build on a cease-fire that ended the worst fighting in years between Israel and militants in the Gaza Strip.

“Following up on our quiet, intensive diplomacy to bring about a cease-fire between Israel and Hamas, I have asked my secretary of state, Tony Blinken, to travel to the Middle East this week,” President Joe Biden announced in a statement early Monday morning.

The secretary's trip, which includes stops in Jerusalem, Ramallah, Cairo and Amman this week, will underscore “our ironclad commitment to Israel’s security,” Biden said, adding that Blinken will continue "our administration’s efforts to rebuild ties to, and support for, the Palestinian people and leaders, after years of neglect.”

The fragile truce, which took effect early Friday morning, halted 11 days of fighting between Israel and Islamist militant group Hamas that left more than 250 people dead, the vast majority of them Palestinians.

The Biden administration, which faced pressure from progressive Democrats to publicly condemn Israel’s heavy airstrikes in Gaza, credits behind-the-scenes discussions — including six calls between Biden and Israeli Prime Minister Benjamin Netanyahu — for helping bring about a cease-fire. In Jerusalem, Blinken is scheduled to meet with Netanyahu as well as President Reuven Rivlin and Foreign Minister Gabi Ashkenazi.

“Secretary Blinken is traveling to the region to discuss essential follow-up efforts to consolidate the cease-fire and reduce risks of further conflict over the coming months,” State Department spokesperson Ned Price said.

In Ramallah, Blinken meet with Palestinian Authority President Mahmoud Abbas and Prime Minister Mohammad Shtayyeh. The West Bank-based leadership, however, has little influence over Hamas, which seized control of the Gaza Strip in 2007 and is considered a terrorist organization by the United States.

During his trip to the region, Blinken will also meet with Egyptian President Abdel Fattah al-Sisi in Cairo. Egypt, which maintains direct relations with both Israel and Hamas and shares a border with Gaza, brokered the cease-fire.

In his announcement on Monday, Biden said Blinken will engage regional partners ensure immediate assistance reaches the people of Gaza and isn't diverted to Hamas.

The United States has pledged to rally international support for rebuilding Gaza, much of which was reduced to rubble in the wake of Israel’s bombing campaign against Hamas. The UN estimates the airstrikes displaced 91,000 Palestinians and leveled more than 1,000 homes.

Blinken will end his trip in Amman for meetings with Jordanian King Abdullah II and his counterpart Ayman Safadi, who is also Jordan's deputy prime minister.