Meeting Prime Minister Benjamin Netanyahu in Jerusalem, US Secretary of State Antony Blinken reiterated US commitment for Israel’s security, and said the United States is committed also to the reconstruction of the Gaza Strip. 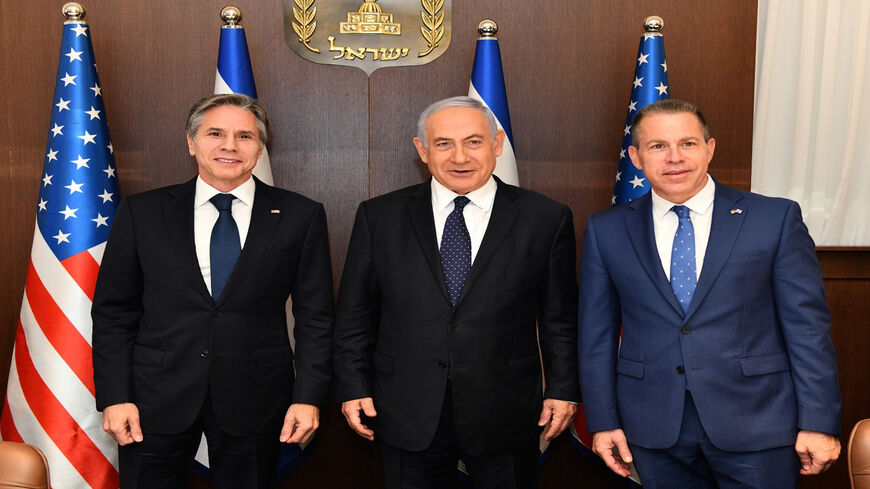 US Secretary of State Antony Blinken arrived today in Israel, his first stop on a regional tour and his first official visit to the country. Blinken is expected to visit also the Palestinian Authority, Jordan and Egypt.

Foreign Minister Gabi Ashkenazi welcomed Blinken upon arrival at Ben Gurion Airport, greeting him warmly. "It is an honor to host you on your first official visit to Israel. Every visit by Sec of State is a special occasion, let alone when it is his first. Looking forward to our discussions on strengthening the US-IL relations and on regional development," Ashkenazi tweeted.

Shortly after his arrival, Blinken met with Prime Minister Benjamin Netanyahu. Speaking at a joint press conference at the prime minister’s office in Jerusalem, Netanyahu thanked President Joe Biden and Blinken for supporting Israel’s right for self-defense, and also thanked Blinken for his personal engagement into replenishing Israel with Iron Dome missile defense batteries. "We too will give meaning to our commitment of self-defense if Hamas breaks the calm and attacks Israel. Our response will be very powerful. And we have discussed ways on how to work together to prevent Hamas rearmament, with weapons and means of aggression," Netanyahu said.

On Iran, Netanyahu noted, "I hope that the United States will not go back to the old JCPOA [Joint Comprehensive Plan of Action], because we believe that deal paves the way for Iran to have an arsenal of nuclear weapons with international legitimacy."

Netanyahu then said Israel and the United States must work together to expand normalization with Arab countries and the Muslim world, and deepen the peace treaties Israel had already signed.

Also speaking at the press conference, Blinken said the United States supports Israel’s right to self-defense and will also be heavily involved in rebuilding the Gaza Strip.

“President Biden asked me to come here today really for four reasons. First, to demonstrate the commitment of the United States to Israel’s security, to start to work toward greater stability and reduce tensions in the West Bank and Jerusalem, to support urgent humanitarian reconstruction assistance in Gaza to benefit the Palestinian people, and to continue to rebuild our relationship with the Palestinian people and Palestinian authority,” Blinken said. The secretary of state pledged to work with the partners of the United States to ensure Hamas doesn't benefit from the reconstruction assistance.

After his meeting with Netanyahu, Blinken and his staff held a long working session with Ashkenazi and senior Israeli diplomats. Tweeting after the meeting, Ashkenazi said, “We have thanked the US for its support of us during Operation Guardian of the Walls. We spoke about the challenges we are facing now as the operation came to its end and we also discussed regional issues.”

Blinken will also meet today with Defense Minister Benny Gantz and President Reuven Rivlin, before continuing to Ramallah, where he will meet with Palestinian President Mahmoud Abbas and other Palestinian officials.