The Takeaway: Timing of return to nuclear deal depends on Iran

Blinken reiterates Biden policy to return to nuclear deal, once Iran is in compliance; Israel readies its war room as possible last resort. 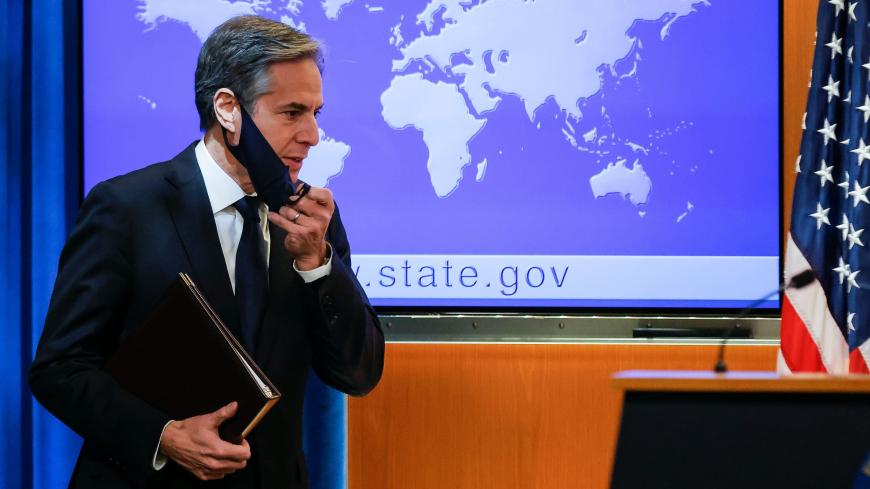 US Secretary of State Antony Blinken arrives for his first press briefing at the State Department in Washington, on Jan. 27, 2021. - CARLOS BARRIA/POOL/AFP via Getty Images

Blinken on Iran deal: “We’re not there yet"

In his first press conference as US secretary of state, Antony Blinken said, "If Iran comes back into full compliance with its obligations under the JCPOA [the Joint Comprehensive Plan of Action], the United States would do the same thing and then we would use that as a platform to build, with our allies and partners, what we called a longer and stronger agreement and to deal with a number of other issues that are deeply problematic in the relationship with Iran."

Blinken’s remarks come in the context of some not unexpected back and forth over whether the United States or Iran goes first in a return to the deal. In the last 48 hours:

• An official in French President Emmanuel Macron’s office backed an Iran-first approach, telling Reuters that Iran must first "refrain from further provocations and secondly respect what they no longer respect; that’s to say, their obligations."

• Iranian Foreign Minister Mohammad Javad Zarif responded by tweet Jan. 26 that Iran will not go first. "It was the US that broke the deal—for no reason. It must remedy its wrong; then Iran will respond."

• Russian Foreign Minister Sergey Lavrov, meeting with Zarif in Moscow, proclaimed Moscow’s position as "identical" to Iran's, saying a US return to the deal would be followed by Iran resuming its commitments.

Zarif’s pique that the United States would ask Iran to go first is no surprise, but it’s hardly a deal killer, or at least it shouldn’t be. The United States indeed withdrew from the deal in May 2018. But Iran’s leaders likely understand the bottom line Blinken made clear again today: that the United States is ready to get back into the JCPOA, as soon as Iran takes the required steps, exactly as President Joe Biden said during the election campaign.

Israel readies war room for US return to Iran deal

While Biden and Israel Prime Minister Benjamin Netanyahu have a friendship going back decades, they differ on whether a US return to the JCPOA is the right move. Former US President Donald Trump and Netanyahu were in complete mind meld on the Iran nuclear deal; they both opposed it. Biden and Bibi, on the other hand, will need to work something out. Iran, in other words, will be "an issue" between close friends.

Israeli Maj. Gen. (ret.) Yaakov Amidror, a confidant of Netanyahu, said last week that if the United States were to return to the JCPOA, "Israel will have no choice but to act military against Iran to prevent it from manufacturing a nuclear weapon.” Amidror’s remarks were no slip of the tongue, according to Ben Caspit; the retired general was likely channeling Bibi to put down a marker for some arduous talks to come.

Netanyahu will do all he can to prevent Biden from a "return for return" deal, as described here by Mark Fitzpatrick, especially during an election season (Israelis vote again, for the fourth time in three years, in March), where a tough line on Iran plays to his constituency.

But Netanyahu also wants to avoid an early scuffle with his friend Biden over Iran, as Barak Ravid reports for Axios. Foreign Minister Gabi Ashkenazi and Defense Minister Benny Gantz, both former military chiefs, view a military option on Iran only as a last resort; another key worry is the potential fallout in US-Israel ties.

The preferred approach, Caspit writes, is to "convene a team of professionals to work with the Americans, creating a sincere and in-depth dialogue and trying to bridge the gaps between Jerusalem and Washington."

And dialogue is indeed the Biden plan, including with a "strong team of experts" on the US side, as Blinken said today. In his nomination hearing last week, Blinken said he will consult with US partners, including Israel, on Iran, as Elizabeth Hagedorn reported. That doesn’t mean Israel will have veto power, but his testimony implied there will be consultations, and there won’t be surprises. Mossad chief Yossi Cohen arrives in Washington in February to make the first direct high-level pitch from Israel on next steps with Iran.

[See below for what Israel and the UAE want to see in a new Iran deal].

In addition to the Israeli elections in March, which will decide Netanyahu’s fate, Iran has presidential elections in June. Iranian President Hassan Rouhani, whose two terms are up, can’t run for reelection. His window for diplomacy for a return to the JCPOA may therefore be constrained by the election campaign. The disposition of the next Iranian government on the JCPOA is unknown. Iran’s parliament, or Majles, is currently run by hard-liners, who have been dominant in Iran since the United States withdrew from the JCPOA.

Next move is Iran’s

Blinken conveyed a sense of priority and deliberateness in the new administration’s approach to Iran. A return to the JCPOA can come sooner or later, or not at all; it’s up to Tehran. The Biden administration is on the record that US regional partners, this time around, will be part of the conversation on Iran and the broader issues of regional security. The JCPOA as a platform for regional security discussions is, in a sense, overdue as a follow up to the nuclear deal. In the absence of diplomacy, the default position in the region could and would again tilt toward conflict.

In case you missed it: What Israel and the UAE want in an Iran deal

What do new diplomatic partners Israel and the UAE want in a new Iran deal? For one, both are calling for an end to any domestic uranium enrichment and nuclear fuel reprocessing in Iran (known as the UAE ‘"gold standard" for civil nuclear cooperation). Check out our podcasts with UAE Minister and Ambassador to the United States Yousef Al Otaiba here, and former Israel Ambassador to the US Ron Dermer here.

Dermer, one of Netanyahu’s closest advisers, told me that Israel won’t rule out a nuclear deal with Iran, if the terms are right.

“Israel would support something that actually dismantles Iran’s nuclear capability,” Dermer said, “even though the price of doing that may be the removal of sanctions.”