Paris backed up Washington after Russia’s government said the Biden administration must make the first move before Iran returns to compliance. 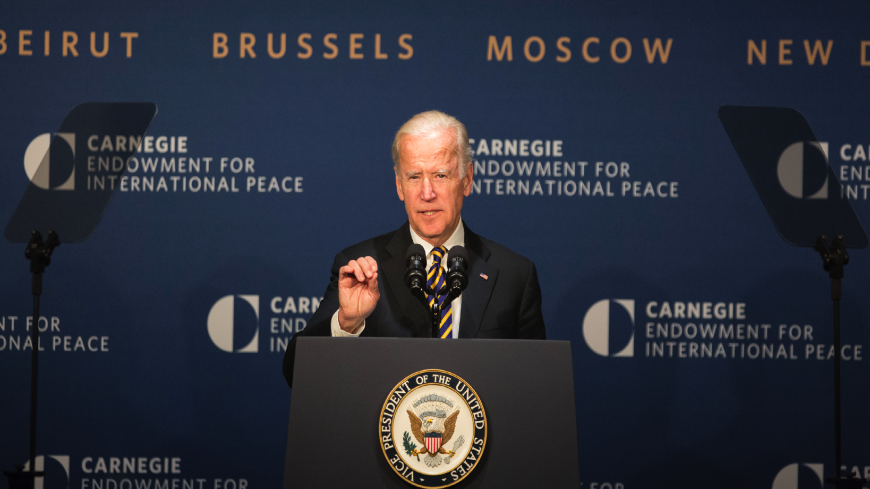 US Vice President Joe Biden gestures as he speaks about the Obama administration's achievements in dealing with nuclear weapons and outlines nuclear issues that face the incoming presidential administration at the Carnegie Endowment for International Peace in Washington, DC, on Jan. 11, 2017. - CHRIS KLEPONIS/AFP via Getty Images

An official with France’s presidency said today that Iran must return to compliance with the 2015 nuclear agreement and end provocations if its leaders want the United States to rejoin the deal.

“If they are serious about negotiations and if they want to obtain a re-engagement of all the stakeholders in the [nuclear deal], they firstly need to refrain from further provocations and secondly respect what they no longer respect; that’s to say, their obligations” under the deal, the official told Reuters and other news outlets on the condition of anonymity on Tuesday.

The statement on France’s position came hours after Russian Foreign Minister Sergey Lavrov said Washington should first lift sanctions on Iran before Iran returns to compliance with the 2015 deal.

Lavrov told reporters that Russia and Iran “share the same position” on how a return to the agreement should be approached. The Russian minister made the statement after he met with Iran’s Foreign Minister Mohammad Javad Zarif in Moscow.

Zarif is currently on a diplomatic tour of the region. He stopped in Azerbaijan on Monday and reportedly has plans to visit Turkey, as well as Georgia and Armenia.

The Trump administration walked out of the multinational 2015 agreement in 2018, saying it would only temporarily limit Iran’s access to a nuclear weapon. The deal also allowed Iran to develop its conventional ballistic missile program. The United States accused Tehran of shipping weapons to proxy militias in Syria, Iraq and Yemen, potentially threatening Washington’s regional partners.

The Trump administration enacted broad economic sanctions on Iran in an attempt to force its government to end its nuclear program and roll back its support for proxy militias in the region.

Iranian leaders have expressed willingness to rejoin the original deal, rejecting any pre-conditions of discussions with the United States over Iran’s regional influence campaign or its conventional ballistic missile program.

Zarif on Monday repeated his government’s stance that Iran would return to compliance with the deal and continue to allow international inspectors at nuclear sites if the Biden administration first lifts sanctions. Iranian government spokesperson Ali Rabei upped the ante on Tuesday, saying Iran would restrict international inspections on Feb. 19 if US sanctions are not pulled back.

Iranian leaders appear to be staking their gambit on President Joe Biden’s desire to break with his predecessor on policies both domestic and foreign, but it is not clear the White House will bite just yet.

“If Iran comes back into compliance, we would too,” Biden’s choice for secretary of state, Tony Blinken, told the Senate last week.

President Biden spoke with France’s President Emmanuel Macron on Sunday. The two “agreed to work together on shared foreign policy priorities,” including regarding the Middle East, according to a White House readout of the call.