The ongoing diplomatic crisis between Israel and Jordan after an Israeli Embassy guard in Amman shot dead two Jordanians threatens a strategic water project for the region. 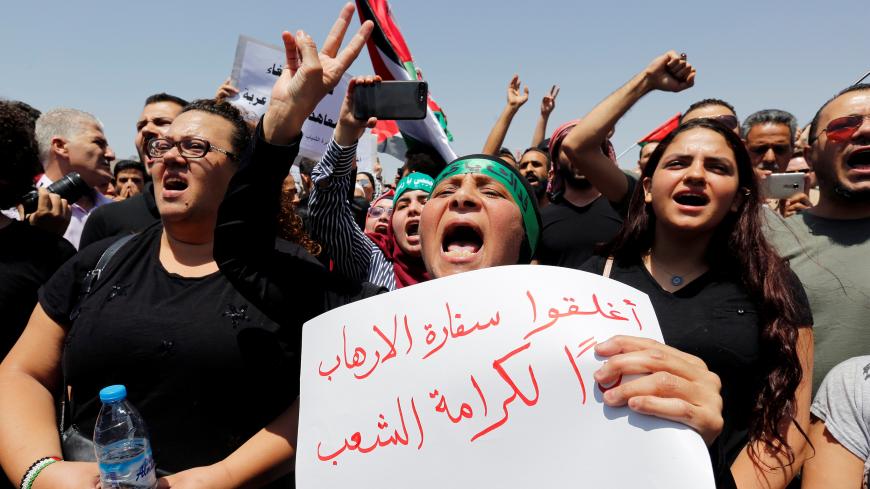 The five-month Jordanian-Israeli diplomatic crisis could be claiming a major multimillion-dollar regional water project as its latest victim as both countries remain deadlocked over a July 23 incident, when an Israeli Embassy guard in Amman shot and killed two Jordanian citizens. According to Al-Ghad newspaper on Nov. 27, Jordan’s Minister of Water and Irrigation Hazim el-Nasser had sent a letter to his Israeli counterpart asking for an official answer as to whether Israel was still committed to a joint agreement for the construction of a pipeline transferring water from the Red Sea to the Dead Sea. The paper said Jordan wanted an answer before the end of the year. But it also added that secret talks were underway between Israel and Jordan over implementing the first phase of the plan, scheduled to begin next year.

The Jordanian move came in the wake of reports in the Israeli media claiming that Israel had informed the Jordanian side that it would “freeze” work on the project until its embassy in Amman is reopened and Ambassador Einat Schlein and her staff were permitted to return to their posts. But on Nov. 30, Reuters quoted a Jordanian official source as saying that the embassy will remain closed until legal procedures are taken against the Israeli guard accused of killing two Jordanians. King Abdullah had insisted on numerous occasions that the Israeli Embassy in Amman will remain closed until the Israeli guard is put on trial.

Israel has refused to take legal action against Ziv Moyal, who claims that he had acted in self-defense. Jordan has rejected his claim and demanded that Israel initiate an investigation and put Moyal on trial. It also called on Israel to replace the Israeli ambassador. In addition, Jordan wants Israel to make a public apology and pay compensations to the families of the slain Jordanians. And on Dec. 1, Al-Ghad reported that Jordan had added an extra condition concerning the fate of an unknown number of Jordanian citizens detained by Israel.

On Nov. 29, Reuters reported that Israel was looking to replace its ambassador to Jordan. The move was seen as an attempt by Israel to defuse the crisis, which Jordan has reportedly ignored.

Meanwhile, the future of the $900 million Red Sea-Dead Sea Water Conveyance Project, which was agreed upon by Jordan and Israel in February 2015, remains in the balance. The project, which will produce power to desalinate seawater, involves Jordan, Israel and the Palestinian Authority, but is of strategic importance to water-starved Jordan. Since the diplomatic crisis with Israel erupted, there have been reports that Jordan was ready to execute the project on its own. But that would create financial and political challenges for the kingdom.

Former Jordanian Water and Irrigation Minister Raed Abu Saud, who was involved in drafting the feasibility studies for the project, told Al-Monitor, “We have no other choice but to go ahead with the Red Sea-Dead Sea pipeline” — because of the kingdom’s endemic water shortages.

He said Jordan cannot carry out the project on its own even if it wants to. “We are bound by international law and because the project runs along a common border [with Israel] and since there are no international waters separating the two sides, we need Israel’s approval,” Abu Saud said.

He said that the project, which should have started this year and will be finished by 2030, will also save the Dead Sea whose surface area had shrunk to 600 square kilometers from about 1,000 square kilometers, mostly as a result of industrial exploitation along its shores.

With both sides sticking to their positions over the embassy incident, there is little chance that normal relations will be restored in the near future. The Jordanian side risks facing public backlash if it is seen to walk back on its demand that Israel take legal measures against Moyal. But the issue goes deeper than that in the view of local observers. Israeli Prime Minister Benjamin Netanyahu and his right-wing government are seen to be adopting increasingly anti-Jordanian policies. Continued incursions by Jewish zealots at Al-Aqsa Mosque, where Jordan holds a special role, and provocative statements by Israeli ministers that point to Jordan as a Palestinian state have put unprecedented strain on bilateral ties.

Jordan’s first ambassador to Israel and former Foreign Minister Marwan al-Muasher underlined the level of distrust between the kingdom and Israel when he stated in a seminar in Amman on Nov. 7, “Israel today is not the same one that we had signed a peace treaty with 25 years ago.” He said that Israel, both as a society and political parties, has veered to the right and is no longer interested in peace or in recognizing Palestinian rights.

Former Prime Minister Taher al-Masri told Al-Monitor that Israel’s intransigence over the embassy incident had left the king with no option but to insist on Jordan’s demands. But he admitted that Jordan now finds itself in a difficult position. “Five months now and there is no indication that the crisis will be resolved. But any talk about freezing the peace treaty with Israel or even terminating it is dangerous and will be costly for both sides,” he said. “We find ourselves stuck in a corner and there is no easy way out.”

Meanwhile, a prominent Jordanian commentator has raised questions about Jordan’s ability to unilaterally build the Red Sea-Dead Sea water project. In his Al-Ghad column on Nov. 16, political analyst Fahd al-Khitan wrote, “International financing for the project was secured on the basis that it was to be a three-way undertaking and accordingly tenders were issued for the project.”

He warned the government that Israel’s withdrawal could jeopardize international financial commitments. “If our government is confident that it can execute the project without Israel then it should have said so publicly and from the beginning, otherwise it should not put itself in a position where it may incur a hefty political cost,” Khitan concluded.