Amid rumors that Jordan is freezing out Israel and the Palestinian Authority with regard to the Red Sea-Dead Sea Water Conveyance Project, officials remained silent. 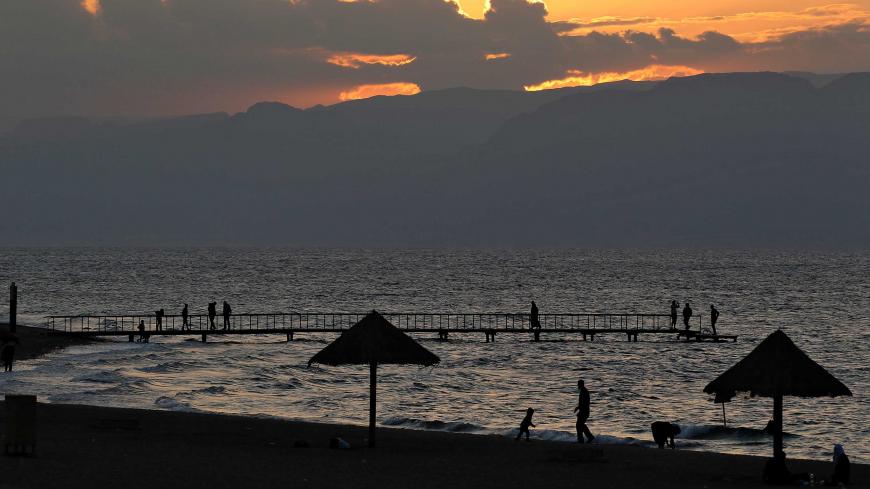 People are seen as the sun sets over a beach in the Aqaba Gulf on the Red Sea, Jordan, Nov. 25, 2011. - REUTERS/Muhammad Hamed

The much-talked-about Red Sea-Dead Sea Water Conveyance Project might be losing its regional components. Two independent sources have told Al-Monitor that this comes as a result of continued Israeli-Jordanian tensions.

A source in the lead technical company that is carrying out the Red-Dead study told Al-Monitor on condition of anonymity that the company has been instructed by Jordan’s Minister of Water and Irrigation Hazim el-Nasser to revise the study and make it a Jordan-only project.

Jordan, Palestine and Israel signed on Dec. 9, 2013, a regional cooperation memorandum of understanding at World Bank headquarters. The agreement — signed by Palestinian Minister of Water and Irrigation Shaddad Attili and his Israeli counterpart Silvan Shalom along with Nasser — supports the management of scarce water resources in the region and the joint development and use of new water resources through seawater desalination.

The memorandum was followed up in February 2015 with a $900 million water distribution bilateral agreement between Jordan and Israel, which would benefit Palestinians as well. The agreement calls for Jordan to sell to Israel the desalinated water from the Red Sea and in return Israel would provide Jordan and Palestine with potable water. The Economist magazine’s intelligence unit predicted in March 2015 that progress on this project “will be vulnerable to political sensitivities at times.” The agreement is now in the process of implementation.

After a shooting incident in Amman on July 24 by an Israeli Embassy security officer that led to the death of two Jordanians, Israel’s ambassador and staff left Jordan and the Israeli Embassy in Amman has been closed. Jordan has demanded guarantees that the Israeli security officer be tried for his actions against Jordanians and an apology. Israel has stonewalled these demands and as a result, relations with Jordan have been described by analysts as a cold peace.

An Oct. 17 press report from a Jordanian website that mentioned the switch to a Jordan-only option regarding the project went without comment from any Jordanian government official.

Jordan Valley Authority Secretary-General Saad Abu Hammour, who heads the Jordanian committee responsible for the Red Sea-Dead Sea project, was surprised to hear the news of the change from Al-Monitor. “As far as I know, there has been no change to the regional aspect of this project,” he said over the phone. “I am concerned that if this happens we might lose some of the funding for it.”

Repeated attempts by Al-Monitor to get comment from Nasser and Water Ministry spokesman Omar Salameh produced no response. The Palestinian Water Authority minister, Mazin Ghnaim, and authority spokeswoman Abeer Awwad, who were also approached for comment by Al-Monitor, didn’t return calls. The US Embassy spokesman in Amman, Eric Barbee, also refused to make a comment. The United States has pledged $100 million to support the Red Sea-Dead Sea project.

Alexander McPhail, the lead World Bank officer working on the Red Sea-Dead Sea project, told Al-Monitor that the institution has issued a $100 million guarantee instrument. “If the Jordanians send us a letter saying that the project’s aims and partners are changed, we are willing to entertain such a request,” he said.

The “Jordan-only option” was mentioned in a World Bank March 2014 study on alternatives by three academics, John Anthony Allan of King’s College London and the School of Oriental and African Studies, Abdallah I. Husein Malkawi of the Jordan University of Science and Technology and Yacov Tsur of The Hebrew University of Jerusalem. In that study, the Jordan-only option is explained as follows, and refers to water volumes in million cubic meters (MCM):

“This alternative would be a ‘Jordan only’ initiative and would not involve Israel or the Palestinian Authority. It would consist of 5 phases and ultimately would aim to abstract 2,150 MCM/year [1.7 million acre-feet] of seawater from the Gulf of Aqaba, partially desalinate this volume to produce 80 MCM/year of potable water in the Aqaba area, and then convey the remaining seawater and brine by pipeline for desalination at the Dead Sea in order to produce a further 850 MCM/year of potable water. A total of up to 1,220 MCM/year would be discharged to the Dead Sea. Phase I, possibly for completion in 2018, would produce 250 MCM/year of desalinated water and 190 MCM/year of Dead Sea discharge.”

Sufyan Tell, one of the main Jordanian individual opponents to the Red Sea-Dead Sea project, told Al-Monitor that four different pro-Israeli project ideas have been floating for years. “In addition to the water wells in Jordanian territory that Israel continues to gain access to even after the Wadi Araba Agreement," he said, "I have documented in my recent book four water channel project options, all of which give much more benefit to the Israelis than to Jordanians.”

EcoPeace, a nongovernmental environmental organization with offices in Palestine, Israel and Jordan, has been the leading regional group opposed to the Red Sea-Dead Sea project. The organization issued a press release Dec. 1, 2015, opposing all aspects of the project. “As EcoPeace has said before, our governments need to recognize that the ‘Red Dead Canal’ project, whether it be Phase I, or otherwise, is not environmentally nor economically sound, and any attempt to connect the subject of the Dead Sea are only doing damage to other sensible projects of water exchange.”

While all parties agree that the dangerous decline of water levels in the Dead Sea must be addressed, the current efforts to use a canal from the Red Sea require a more comprehensive holistic approach that takes into consideration the opinions of all parties involved and ensures that such mega projects don’t do more harm than good.