Experts warn of an environmental crisis if a project is not advanced by Jordan and Israel to save the Dead Sea that is shrinking at catastrophic rates. 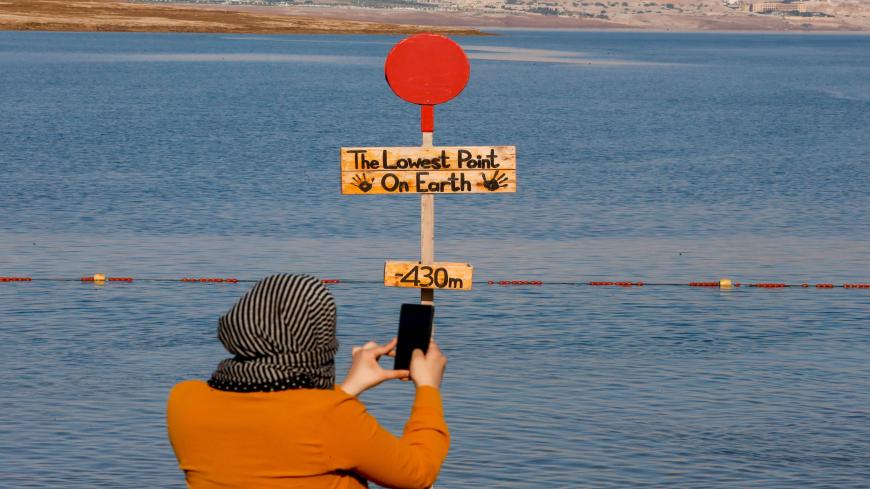 A Palestinian woman takes a picture at the Dead Sea during Eid al-Adha, near the city of Jericho, West Bank, Aug. 2, 2020. - Hazem Bader/AFP via Getty Images

For decades environmentalists have been warning that the Dead Sea, a unique body of water situated between Jordan and Israel, was actually dying as its area has been shrinking at a rate of 1 meter (3.3 feet) per year. At this rate, experts believe that the saltiest sea on earth will dry up by the year 2050 leaving environmental, social and economic ruin in its wake.

Water expert and head of the Friends of the Dead Sea Society Saad Abu Hammour told Al-Monitor that the receding waterline has picked up in the past few years threatening a complete environmental collapse of the Dead Sea, which, at 430.5 meters (1,412 feet) below sea level, is situated at the lowest point on earth. He said that the Red Sea-Dead Sea Water Conveyance project is the only hope to spare the region an environmental catastrophe.

Israel is largely to blame for the drying up of the Dead Sea. For the last four decades it — and to a lesser extent Jordan — has been diverting the waters of the Jordan River, which has been replenishing the Dead Sea for millennia. Climate change, where summer temperatures reach more than 40 degrees Celsius (104 degrees Fahrenheit), has also contributed to the receding coastline. Both Jordan and Israel have multibillion-dollar potash extraction industries in the southern edge of the Dead Sea.

“We have lost hope of saving the Dead Sea since talks over the water conveyance project between Jordan and Israel had stopped since 2017,” Abu Hammour said. Initially the project would deliver 235 million cubic meters of brine and desalinated water to the Dead Sea pumped from the Gulf of Aqaba, he added.

Abu Hammour, who headed the Jordanian delegation in the Dead Sea-Red Sea Water Conveyance talks with Israel and the Palestinian Authority, said that project negotiations had reached final stages where companies were selected to present offers to build the pipeline and pumping stations on a build-operate-transfer basis. Once completed, the $1.5-billion project would include building a desalination facility in Jordan, while pumping the remaining brine into the Dead Sea. It will also generate electricity and revive the area along its 200-kilometer (124-mile) length.

The initial agreement was signed in 2013, under the auspices of the World Bank, but talks had stalled a number of times and finally came to a halt after an Israeli security guard shot two Jordanians at the Israeli Embassy compound in Amman in July 2017. Efforts to resume negotiations were hampered by ensuing diplomatic crises between Jordan and Israel over Al-Aqsa Mosque.

Jordan stands to lose the most over the Dead Sea’s environmental crisis. The receding coastline is creating sinkholes that swallow roads and buildings while contaminating fresh water aquifers and polluting the air in the surrounding area. Unlike Israel, Jordan has multibillion-dollar seaside five-star hotels, conference centers and luxurious apartment buildings on its side of the coast. The receding shoreline is bad news for the struggling tourism industry.

Head of the Jordanian Geologists Association Sakher Ensour told Al-Monitor that Israeli diversion of the waters of the Jordan River has cut its flow into the Dead Sea from 1.5 billion cubic meters annually to less than 200 million cubic meters. “The challenge to save the Dead Sea cannot be met by Jordan alone; it requires an international effort to save this historical treasure,” he said.

Ensour estimates that the shrinking rate has increased from 1 meter to 1.5 meter annually and water depth is decreasing by 70 centimers to 80 centimeters annually. Its total surface area has declined from 950 square kilometers (367 square miles) in 2000 to about 650 square kilometers (251 square miles) in 2019. “In total the coastline had retreated by 22 meters [72 feet] in the past 20 years,” Ensour added.

Abu Hammour has urged the Jordanian government not to give up on the “strategic project,” which will not only save the Dead Sea but will also generate electricity and drinking water for one of the most parched countries in the world. “Once the first stage of the project is running, it will increase water flow into the Dead Sea by 50%,” he said. “The second phase will raise the inflow to 700 million cubic meters, which will reverse the Dead Sea’s shrinkage or at least stabilize it.”

According to Jordan’s Ministry of Tourism, about 200,000 tourists visited the Dead Sea and Jordan River (Baptism area) last year. “The area offers a unique variety of religious, leisure and health tourism and losing it will be catastrophic for a major source of foreign currency for Jordan,” Abu Hammour said.

But in a sign that the Jordanian government is giving up on the project, Minister of Water and Irrigation Motasem Saedan told a local news website Dec. 26 that work will begin soon on building a water desalination station in Aqaba to pump drinking water to the capital Amman. He said that the project will be ready in 2025 and that 12 international companies have shown interest. For now it seems attempts to save the Dead Sea are going nowhere.