It appears that Jordan has quietly accepted Israel’s apology for the killing of two Jordanians by an Israeli Embassy guard in Amman without the perpetrator being put on trial. 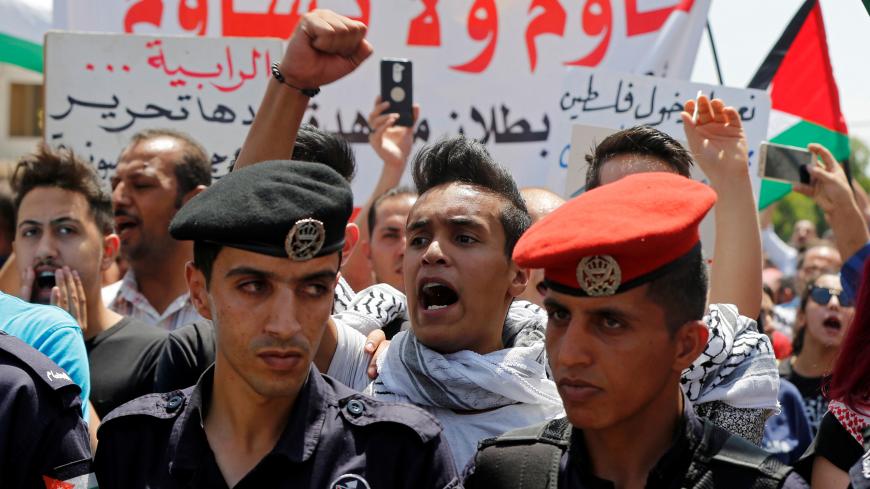 Protesters chant slogans during a demonstration near the Israeli Embassy in Amman, Jordan, July 28, 2017. - REUTERS/Muhammad Hamed

“Bitter friends and good enemies” is how a seasoned former Jordanian official once described the relationship between Jordan and Israel to Al-Monitor. After a tumultuous 2017, the Israeli government finally offered Jordan a formal “apology” Jan. 18 for the July 23 killing of two Jordanians by an Israeli Embassy security guard in Amman and the gunning down of a Jordanian judge who was crossing into the West Bank on March 10, 2014. The apology ostensibly closed the chapter on the worst crisis to hit the two countries' relations since they signed a peace treaty in 1994.

Mohammad al-Momani, a Jordanian government spokesman and the minister of state for media affairs, said in a Jan. 18 statement that the Foreign Ministry had received an official memo from its Israeli counterpart. He said, “The Israeli government expressed its apology and deep regrets regarding the Israeli Embassy incident in July last year, resulting in the martyrdom of two Jordanian citizens, and also regarding the incident of killing Judge Raed Zuaiter.” Momani said the Israeli government had accepted, as indicated in its letter, all the conditions set by Jordan to permit the return of Israel's ambassador to Amman.

Jordanians immediately began to question the claim that all of Amman's conditions for reopening the Israeli Embassy, closed since July, had been met. King Abdullah II had on July 27 demanded that Israel put on trial the Israeli guard whom Jordan accused of killing the two Jordanians before allowing the embassy to reopen. “We demand that the Israeli Prime Minister [Benjamin Netanyahu] abides by his commitment and takes all measures to ensure the trial of the killer, and not handle this like a political show to achieve personal political gains,” Abdullah said.

The government did not release the text of the Israeli letter, purported to contain the apology and a commitment to take legal action regarding the embassy incident in addition to an offer of compensation to the victims’ families. A brief acknowledgment on the website of the Israeli prime minister's office failed to provide details. The note read, “The Israeli authorities will continue reviewing materials regarding the July 2017 incident and anticipate making a decision in the coming weeks.” It added that the embassy in Amman will return to full activity immediately.

Jordanians commenting on social media were unconvinced that Israel had apologized for the two incidents, let alone committed itself to taking legal action against the Israeli guard. They demanded that the government release the full text of the Israeli memorandum delivered to Amman.

While Israeli government representatives and the Foreign Ministry remained silent, Netanyahu told journalists Jan. 19 that Israel had “expressed regret and sorrow” to Jordan over the killing of two of its citizens. He added that Israel would pay compensation totaling $5 million to the Jordanian government, not to the victims’ families.

While this perhaps provided some credence on the question of the apology, the issue of putting the Israeli security guard on trial remained unconfirmed. On Jan. 21, Israeli sources told Reuters that Israel would not prosecute the guard. Instead, the sources told the agency Israel would study the incident and “share the results with the Jordanians.” Another source said that there was “no way” Israel would pursue criminal charges against the guard.

The Jordanian government has not commented on these statements. Amman's lack of reaction to them has led some pundits to believe that the government has decided to play down the issue. Some think the kingdom may have succumbed to US pressure to end the six-month diplomatic impasse. On Jan. 20, Netanyahu thanked the United States for its “behind-the-scenes efforts” to resolve Israel’s diplomatic standoff with Jordan. His office issued a statement saying that the prime minister had “expressed his appreciation to [presidential adviser Jared] Kushner and [Middle East envoy Jason] Greenblatt for their efforts, which helped solve the crisis.” Once more the Jordanian government was silent on the matter.

Jordan may have chosen to end the dispute in the aftermath of President Donald Trump’s surprise declaration recognizing Jerusalem as the capital of Israel on Dec. 6. Following an intensive diplomatic campaign personally led by Abdullah against the US decision, the Jordanian leadership began a thorough review of the repercussions of the action. While continuing to clearly state his position on Jerusalem and the two-state solution, evident during US Vice President Mike Pence's visit to the kingdom Jan. 20, the king had apparently opted for quiet diplomatic engagement with the Trump administration and the Israeli government rather than direct confrontation.

This may explain the circumstances that led to the agreement reached between Israel and Jordan. While the two countries have diametrically opposing stands over the final status issues concerning the Palestinians, Jordan and Israel have some shared interests to maintain. These include security coordination, especially regarding the situation in southern Syria and the building of a multilateral, multimillion dollar water conveyance project between the Red Sea and the Dead Sea. Above all, from Jordan’s perspective, is protection of the kingdom’s custodianship of Muslim and Christian holy sites in East Jerusalem following Trump’s controversial decision.

Still, Abdullah has not commented on the agreement with Israel. Israeli sources said that efforts were being made to arrange a phone call between the king and the prime minister. Such a conversation does not appear to have happened. Both men were in Davos, Switzerland, on Jan. 25, to attend the World Economic Forum, but did not meet. Abdullah told the forum that there could be no peace process without the United States and that he remained open to the possibility of peace talks in the region despite Trump’s decision on Jerusalem, which represented a “complication for Jordan.”

For now, political expediency seems to have facilitated a reset in Jordanian-Israeli ties. The relationship remains frosty, however, especially between the king and the prime minister. Tensions may flare up if incursions by Jewish zealots continue at the site of Al-Aqsa Mosque and if Israel fails to take legal action against the guard involved in the embassy killings. The latter could push relations back to the edge.