Why Israel-Jordan crisis lasted so long

After a tough reconciliation effort, Israel and Jordan have mended relations from the crisis that erupted over the shooting incident in Amman. 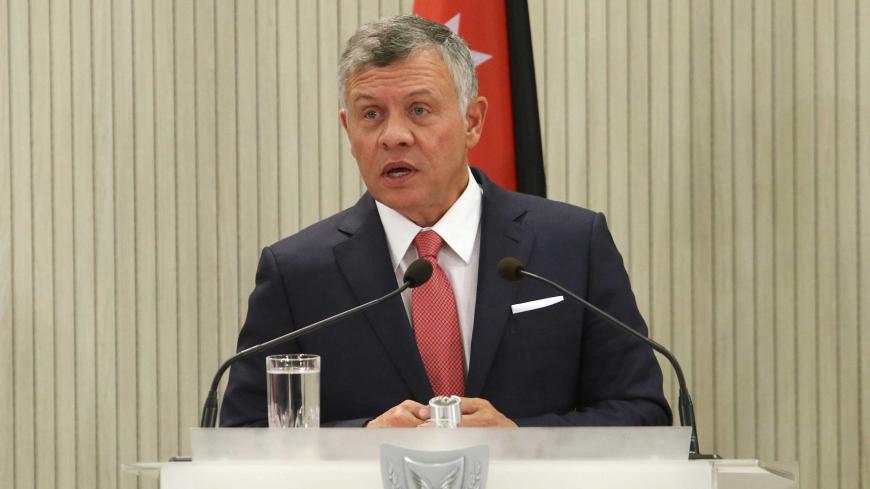 “It all happened because of one photo. This affair could have ended much sooner.” This was what a senior member of Israel’s Security Cabinet told Al-Monitor on condition of anonymity, six months after the July 2017 shooting to death of two Jordanians by an Israeli Embassy guard that set off a severe crisis between the countries.

This week, after tumultuous shuttle diplomacy between King Abdullah’s palace in Amman and Prime Minister Benjamin Netanyahu’s office in Jerusalem, the crisis appeared to be nearing resolution. Now, after Israel agreed to apologize publicly, pay millions of dollars in compensation, replace its ambassador in Jordan and complete its investigation of the fatal incident, the king has finally given in to the heavy pressure exerted on him in recent months. The Israeli Embassy in Amman will reopen as soon as a new ambassador is found to run it.

Much of the crisis could have been averted had Netanyahu not insisted on rushing to cash in on the affair from both a public and political perspective. Immediately after Jordanian authorities allowed the ambassador and the guard to leave Amman and return to Jerusalem, Netanyahu’s office issued a photo of himself with the guard who had killed the two Jordanian citizens in an incident that had yet to be fully explained at the time. Netanyahu’s office also disseminated a taped conversation with Israeli Ambassador Einat Schlein, who had accompanied the guard to the meeting. The photo had an incendiary effect. The Jordanian monarch was furious, and the local crisis turned into a strategic issue overnight. This is not the first time Israel has had to pay dearly for Netanyahu’s haste, recklessness and inclination to cash in on public credit at the expense of Israel’s strategic national interests. Some of his ministers share this view, but they obviously keep it to themselves.

The incident occurred on July 22, 2017, when an Israeli guard was attacked with a screwdriver by a young Jordanian who was installing furniture at the home of one of the embassy staff in the Jordanian capital. The guard pulled out his gun and shot the assailant dead, also killing the owner of the apartment in the fray. The incident set off a powerful storm and a deep crisis in ties between the two neighbors. Shin Bet chief Nadav Argaman had to intervene personally so the Jordanian authorities would allow the guard and Ambassador Schlein to return to Israel. And then came Netanyahu: Instead of downplaying the incident and laying low, Netanyahu spoke by phone with the ambassador and posed for a photo embracing the guard who had been invited to his office. The photo and taped conversation distributed to the media generated deep anger at the palace in Amman. “The king was furious,” a senior Israeli security source told Al-Monitor on condition of anonymity. “The fact that the prime minister embraced the guard who had shot dead two Jordanian citizens made the king a laughingstock in Amman and added fuel to the public wave of protests sweeping the capital.”

Netanyahu, too, came in for harsh domestic criticism, including from his own ministers who only spoke on condition of anonymity. “Extreme irresponsibility” and “irrepressible urge to make political and public capital at the expense of national interests” were just some of the expressions heard by Al-Monitor.

The strategic alliance between Israel and Jordan is far more powerful and comprehensive than the relationship reflected in the media. The Hashemite Kingdom is engaged in a daily battle for survival in the face of external (mostly from Islamic State) and domestic threats (the massive number of refugees the country has taken in and the very high percentage of Palestinians among its population). It is dependent on outside support for its survival. Nonetheless, King Abdullah refused to revert to business as usual, suspending ties with Israel to teach Netanyahu a lesson.

Netanyahu, on the other hand, miscalculated in evaluating the depth of the crisis and Jordan’s anger. Abdullah did not want to hear from him, and with good reason. The Jordanians demanded: an in-depth investigation of the guard to get to the bottom of the shooting; extensive compensation for the families of the victims; and a public apology and replacement of the Israeli ambassador, who had become a lame duck after the conversation with the prime minister was made public.

In the first few weeks, Netanyahu kept up a determined facade and rejected most of the Jordanian demands. He believed the king would cool down in time. The monarch, however, kept getting hotter and hotter under the collar. Various mediators tried in vain to resolve the standoff. The king rejected all of Israel’s feelers and stood firm. The Israeli Embassy was shuttered and abandoned. The handling of the crisis moved from Argaman’s hands to those of his very experienced Mossad counterpart, Yossi Cohen. Both agency heads had recommended from the start that Israel acquiesce to the Jordanian demands. According to a security source, both men affirmed there wouldn't be a better option.

Eventually, Netanyahu also agreed and gave the mediators — among them US presidential envoys Jared Kushner and Jason Greenblatt — the rope they needed. Nonetheless, it was tough going. The issue left to be resolved was the Jordanian demand that Israel complete the investigation before official ties are restored. Israel objected. Eventually, the two sides agreed to announce an end to the crisis before the investigation was completed, but to implement the restoration of ties only once Israel hands the Jordanians the conclusions of the investigation. Either way, Israel and Jordan are now licking their wounds and preparing to turn over a new leaf in their ties, hoping Netanyahu does not issue an additional “infuriating” photo.

This was the backdrop for the arrival in the region of US Vice President Mike Pence, who started his visit over the weekend with meetings with Egyptian President Abdel Fattah al-Sisi in Cairo and with King Abdullah in Jordan before heading for Israel on Jan. 21. Pence contributed his share to rebooting the relationship between Jerusalem and Amman, although on the issue of President Donald Trump’s recent Jerusalem proclamation, Pence said that he and the Jordanian monarch “agreed to disagree.” Abdullah made clear to Pence Jordan’s grave concern over the freeze in Israeli-Palestinian negotiations, Trump’s recognition of Jerusalem as Israel’s capital and the situation within the Palestinian Authority. Pence heard him out but appeared unimpressed. “The VP is here mostly for fun,” a top Israeli Cabinet member told Al-Monitor on condition of anonymity. “No one expects the diplomatic process to be resumed or for any breakthrough to be achieved. Pence is a friend of Israel’s and was the motivating force behind the Jerusalem declaration, so he’s here to celebrate his victory.”

The problem is that Pence’s victory is the defeat of most other players in the region — except for Israel, of course. There is no solution in the offing for the Palestinian decision to walk away from the peace process in anger over Trump’s announcement. Small wonder that with Pence’s arrival in Israel, Palestinian President Mahmoud Abbas left his West bank Ramallah headquarters and flew to the headquarters of the European Union in Brussels to launch a diplomatic offensive against the United States and Israel. The Americans are in Israel, the Palestinians are in Europe — and that sums up succinctly the state of play in the region.