Israel and Jordan sign agreement to allow overflights flights through each other's airspace. 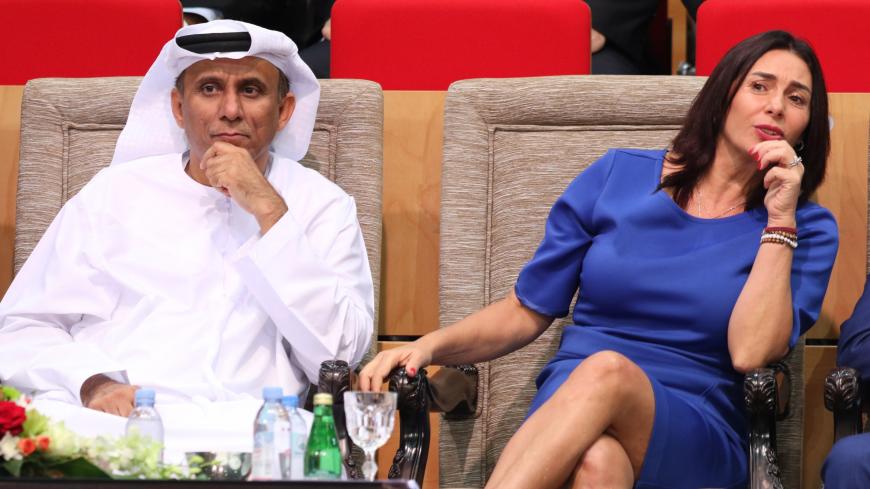 Israeli Transport Minister Miri Regev said the government is “breaking new boundaries” and that the country is “increasingly integrating” following the signing of an airspace agreement with Jordan on Oct. 8, 2020, that should allow overflights from the United Arab Emirates and other countries. Here, Regev (R) is seen when she was culture and sport minister during the Abu Dhabi Grand Slam Judo tournament in the UAE capital, Abu Dhabi, on Oct. 27, 2018. Next to her is Mohamed Bin Thaaloob al-Derai, president of the UAE Wrestling, Judo & Kickboxing Federation. - AFP via Getty Images

On Oct. 8, Israeli and Jordanian civil aviation authorities signed a new aviation agreement that enables commercial flights to cross the airspace of both countries.

The deal will open more flight paths over both countries, thus considerably shortening flight times from Gulf states, the Far East and Asia to Europe and North America. For Israel, this could mean new flight paths departing from Iraq, Qatar, Saudi Arabia and the United Arab Emirates. It could also mean a new path over Iran that would be used by flights taking off from China.

According to the agreement, for security reasons, Israel will approve each airline's flight paths in advance. For flight companies and for consumers, the deal is expected to save fuel, reduce emissions and contribute to the quality of the environment. In other words, flights will be shorter, direct and cheaper.

The agreement was signed after what was said to be several years of negotiations. It appears the recent normalization deals with the United Arab Emirates and Bahrain, as well as Saudi Arabia's recent agreement to open its skies to flights from Israel, accelerated the negotiation process.

On Sept. 16, Israeli media said that after the Aug. 13 announcement of President Donald Trump on the Israeli-UAE deal, UN Mideast envoy Nickolay Mladenov held several talks with Israeli senior officials. Mladenov reportedly told the officials that Amman is now interested in advancing and strengthen its ties with Jerusalem. The aviation deal seems to be a first, concrete move in that direction.

Bilateral relations between Israel and Jordan have been strained, to say the least, in recent years, with a series of incidents that put the fragile 1994 peace agreement to test again and again.

In 2017, an Israeli guard at the Israeli Embassy in Amman shot and killed two Jordanian nationals. The guard apparently thought he was being attacked. Fearing the guard would be arrested by the Jordanians, then-Israeli Ambassador Einat Schlein accompanied him in a diplomatic car across the border and back to Israel. A picture of Prime Minister Benjamin Netanyahu receiving in his office both Schlein and the guard was perceived by Amman as an insult. Amman refused to allow Schlein to return to her post, and it was only in 2018 that the Jordanians agreed to a new Israeli ambassador — current envoy Amir Weissbrod.

In 2019, two Jordanian citizens — Heba Labadi and Abdulrahman Meri — were arrested separately on suspicion of security breaches. It was only after Labadi went on a dayslong hunger strike and continuing pressure by Amman that Israel agreed to release them.

An added painful milestone in Israel-Jordan relations, was that of two agriculture enclaves leased for 25 years by Jordan to Israeli farmers in the framework of the 1994 peace agreement. The 25-year lease came to its end in late 2019. On the backdrop of the deterioration in diplomatic ties, King Abdullah II decided not to renew the lease, forcing the Israeli farmers to abandon their lands.

Still, the most serious blow to bilateral ties was undoubtedly Netanyahu’s annexation plan. On June 15 it was published that the Jordanian king refused to speak with Netanyahu over the phone or to set up a date for a meeting requested by Defense Minister Benny Gantz. Two days later, Abdullah warned US lawmakers that  Israel’s annexation plan was "unacceptable" and that the plan would undermine regional stability. Israeli security agencies multiplied their own warnings to Netanyahu over possible damage to the strategic relations with Amman. This took place to the extent that Netanyahu decided to send Mossad chief Yossi Cohen to Jordan to meet with Abdullah and to relay to him a special, secret message concerning the annexation.

Egyptian President Abdel Fattah al-Sisi reacted quickly to Trump’s Aug. 13 announcement on an Israel-UAE deal, welcoming the development. But that was not the case of Jordan. Jordanian Foreign Minister Ayman Safadi said in August that the “sole path” to ending the conflict is abiding by the two-state solution. Safadi met in Jericho with PLO senior leader Saeb Erekat, reiterating Jordan’s objection to West Bank occupation and its commitment to the 2002 Arab Peace initiative. Clearly, the Hashemite Kingdom resented the Emirates' move, which sidelined the Palestinian issue.

Israeli diplomats say that the new aviation deal reflects a change in Amman's attitude on the issue, brought about for various reasons. One is the huge financial aid Jordan has been receiving in recent years from the Emirates; another is American pressure.

Still, Israel’s Foreign Ministry estimates that the road to a "warm peace" with Jordan is going to be long and complicated. The Jordanians see and feel the enthusiasm in Gulf countries over ties with Israel, but cannot turn their back on the Palestinians altogether. Meeting with his Emirati counterpart in Berlin on Oct. 6, Israeli Foreign Minister Gabi Ashkenazi called upon the Palestinians to return to the negotiation table. A move in that direction could offer Amman the push it needs to follow in the UAE's footsteps.