Israel’s political right should pay attention to statements made Jordan's King Abdullah, who made it clear that he objects to all annexation plans advanced by the Netanyahu government. 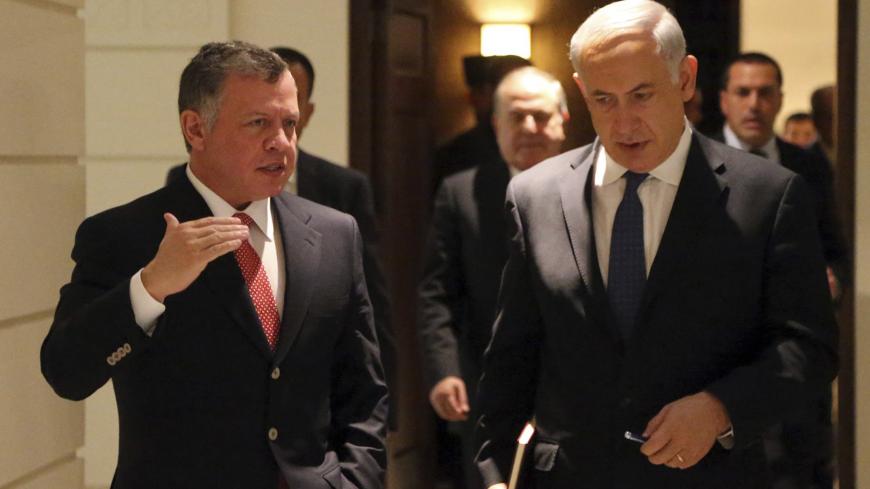 Anyone who didn’t get an invitation to the ceremony marking a quarter century of the signing of the peace accord between Israel and Jordan in the Arava Valley shouldn’t be insulted. Such a ceremony won’t take place Oct. 26. Not in Israel or in Jordan, and certainly not together.

I remember well my flight with Prime Minister Yitzhak Rabin in 1994 in a military helicopter, from the Knesset’s launchpad to the quickly prepared field in the desert, close to the Jordanian border. We disembarked from the helicopter wearing white caps marking the date of the event, and Rabin struggled to contain his great joy. The special relationship with Jordan was out of the closet, and since we weren’t real enemies before the accord was signed, it seemed that now true friendship would flourish, especially since the Knesset was united behind the peace agreement, which couldn’t have happened without the Oslo Accord, which shortly preceded it.

But after the initial excitement and many Israelis’ visits to Petra, the special economic arrangements signed with the aid of the United States and the successful economic summit that took place a year later in Amman, came different days: Talks with the Palestinians halted and peace negotiations with them never started; the Mossad’s attempt to assassinate the leader of Hamas, Khaled Meshaal, while he was in Amman in September 1997 was seen by the late King Hussein as a betrayal of the agreement by Israel; and the Second Intifada broke out in 2000. All these factors caused a deep crisis that stemmed, among other things, from the Jordanian fear of a flow of Palestinian refugees, driven by despair and family ties, from the West Bank of Jordan to the East Bank, and that these would cause Palestinian violence in Jordan.

I remember a conversation with King Abdullah II, during the intifada, when he told me that for any funeral in the West Bank a mourning tent is erected in the East Bank. He complained that Israel doesn’t properly understand the significance of this. When two Jordanian citizens were killed in the apartment of an Israeli security guard in July 2017, the guard’s escape with the aid of the Israeli ambassador to Jordan at the time, Einat Schlein, and the reception held for him by Prime Minister Benjamin Netanyahu, greatly hurt relations with Jordan. They created a crisis that continued for months, until our neighbor in the east agreed to receive a new Israeli ambassador, Amir Weissbrod.

On Sept. 24, the king of Jordan gave an interview to MSNBC’s Andrea Mitchell and warned of the implications of Netanyahu’s statement regarding the annexation of the Jordan Valley and settlement areas for relations between Israel and Jordan, while adding that its fate would be similar to Israel-Egypt relations should these plans be realized. The king expressed firm opposition to a situation wherein only one state exists west of the Jordan: “Then we are talking about an apartheid future for Israel, which I think would be a catastrophe to all of us.” He then repeated that the two-state solution is the only solution to the Israeli-Palestinian conflict.

Abdullah added that Netanyahu’s declaration of his intention to annex the Jordan Valley “does not help at all, because what you do is then hand over the narrative to the worst people in our neighborhood.” He recommended bringing Israel and the Palestinians closer, saying that if this doesn’t happen, the region would be in danger.

Israeli media hardly mentioned the king’s interview, nor did it mention that at the end of the month Israel will lose the two enclaves that were under its control (Naharayim and Tzofar, also called the Isle of Peace) for a quarter century. Until now they were under Jordanian sovereignty and leased to Israel, so that Israel could use them for its needs. According to the agreement between us, Jordan should have announced a year ahead of time that it wishes to receive full control over the two areas, and it indeed did so. The government of Israel then announced an intention to hold negotiations that would allow them to stay in our hands, but there have been no signs for such negotiations, and the affair ended. Given the current state of relations between the two countries, there’s not much chance that Jordan would agree to go beyond the signed peace agreement and enable Israel to use these enclaves for decades longer.

The peace with Jordan diminished and even nullified the eastern threat to Israel. Security cooperation is deep and significant, but there’s no sign of this among the Jordanian public. The professional associations boycott Israel. Visits of Jordanian officials to Israel haven’t happened in many years. Extreme anti-Israel language is heard in the Jordanian parliament, where resolutions are passed calling on the Jordanian government to cancel the peace agreement with Israel. Even if these resolutions are nonbinding, they still express the sentiment of the Jordanian street, which ties the hands of decision-makers in the normalization processes with Israel.

Israel pays lip service to the importance of relations with Jordan and is very proud of the agreement signed in 2015 between the two on a water canal initiative that would connect the Red Sea and Dead Sea. But the fact that since the peace accord was signed, we actually have not had any security threats from the east is taken for granted. The government treats Jordan like a weak state whose regime isn’t secure and whose status in the Middle East is insignificant. It does so instead of using the existence of the peace agreement to advance the Arab Initiative of 2002, which Jordanian officials, like then-Foreign Minister Marwan Muashar, formulated negotiations on the basis of which could create real peace and normalization in the region, instead of making do with shaky peace between leaders and intelligence officials.

Leaders on the right have whispered for many years that Jordan doesn’t want a two-state solution and that it prefers that its western neighbor be Israel. Their opposition to the two-state-solution, which is the only one that could ensure that Israel remains a Jewish and democratic state, stems, so they say, from the desire to defend Jordan. With all respect to the great generosity of those who oppose the division of the land, they should read the words of King Abdullah and understand that what he says in public is much more important than what someone says behind closed doors.